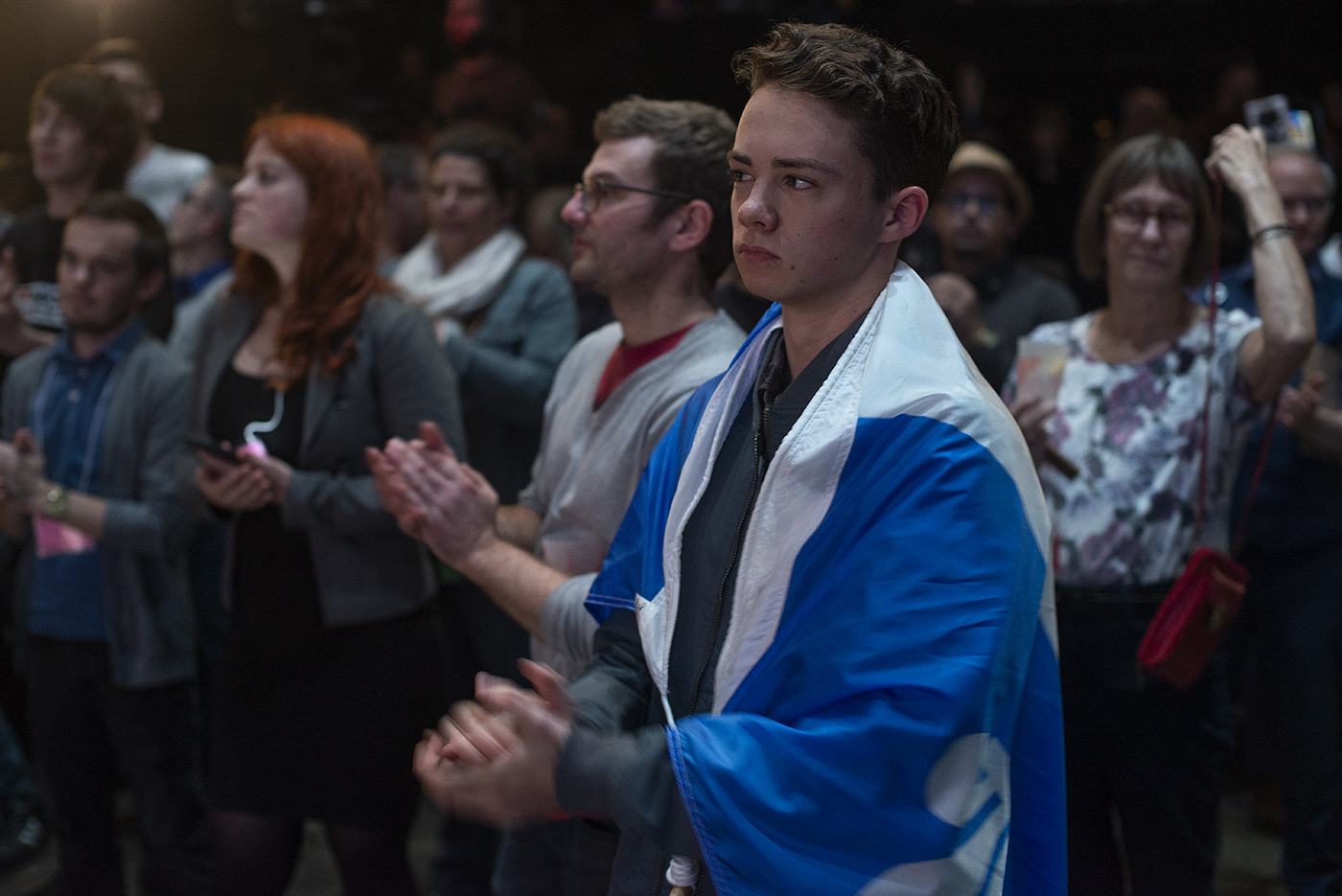 A young Parti Québécois supporter applauds during speeches at the party's rally in Montreal while poll results come in for the Oct. 1, 2018 general election. Photo by Brandon Johnston
Previous story
Next story

Parti Québécois supporters watched quietly from Montreal as their party leader lost his seat and stepped down, while the Coalition Avenir Québec celebrated a majority win in Quebec City.

Around 10 p.m. EST, reporters confirmed that Jean-François Lisée — who has led the PQ since 2016 — lost his seat in Rosemont to Québec solidaire's Vincent Marissal, a former La Presse journalist.

Soon afterward, Lisée announced he would resign as party leader. He congratulated Marissal in a tweet, and in French, told his replacement to take care of the "exceptional" constituents in the riding.

"A wave of a different nature overtook my riding...Thank you to the citizens of Rosemont who had confidence in me over the last six years,” he said in his speech.

Despite stepping down, Lisée added that he would stand by the party in whatever battles come next: “We are in shock tonight, but we will stand tall and strong because Quebec still needs the Parti Québécois."

“I think we can be proud of our campaign of ideas... ideas that we based on our values and convictions," PQ president Gabrielle Lemieux told disappointed supporters on Monday. #electionqc #QuebecElection #qcpoli

Though sovereignty may not have been a key point of the PQ’s campaign this time election, Lisée thanked young voters who voted for both his party and QS, saying they are moving towards a new generation of separatists.

In his speech, he also said he had called Premier-designate François Legault to congratulate him on his win and invite him to take on as much of the PQ’s platform as he could as his party forms a government.

Legault’s right-of-centre CAQ locked down a majority with 74 seats, taking an early lead against the incumbent Liberals, who will form the official Opposition. The result ends nearly five decades of two-party rule in Quebec between the federalist Liberals and the sovereignist PQ.

“It’s certain that we’re not perfect. No one in the party would say we’re perfect,” PQ president Gabrielle Lemieux told reporters on Monday. “I’d say the party’s biggest challenge has been to represent the change that Quebecers asked for.

“We had the opportunity in this campaign to really present our ideas and that was the most important thing for us, to have a chance to do that.”

The election coverage playing on monitors at the PQ's rally in downtown Montreal was silenced early in the evening, and replaced with music as disappointed PQ supporters were invited to grab a drink and watch the rest of the results come in at Usine C.

“I think we can be proud of our campaign of ideas... ideas that we based on our values and convictions,” said Lemieux.

Prominent PQ candidates that had secured their seats by 10 p.m. included the party’s deputy leader, Véronique Hivon in the Lanaudiere riding of Joliette, Martin Ouellet in the René-Lévesque riding in Quebec’s Cote-Nord and Pascal Bérubé in Matane-Matapédia.

In his speech, Lisée wondered whether the results of Monday's election would have been different had QS accepted his party's offer to form a partnership last year. Québec solidaire rejected the proposal in May 2017, citing the PQ's "incoherence and inconsistency."

“We can’t rewrite the past," said Lisée, "but we must learn lessons for the future.”

Marissal, who will replace Lisée as MNA for Rosemont, told reporters at the QS rally in Montreal that he was “so glad” he won the riding, but that he takes “no personal satisfaction" from having defeated the outgoing PQ leader.

"That was not my goal, and not the reason why I jumped into the race.”

The almost six-week-long campaign has not been easy for the PQ.

In polls leading up to election day, the sovereignist party was projected to find itself in third place, behind the Coalition Avenir Québec and the Quebec Liberals. That put the PQ at risk of losing its official party status in the National Assembly.

Some of the PQ’s candidates have also found themselves in hot water throughout the campaign, with a few resigning amid controversies.

Muguette Paillé, who had been personally recruited by Lisée, pulled out of the race in the Maskinongé riding before it even began, after her history of racist and Islamophobic comments on social media came to light.

And nearly a week after the campaign’s kick-off in August, former Drummond—Bois-Franc candidate Pierre Marcotte was banned from running for racist comments that compared Islamic people to dogs. Incumbent MNA for Beauharnois Guy Leclair also withdrew his candidacy in early September after it was discovered that he had been charged for drunk driving in July.

While she has not stepped down, Mercier candidate Michelle Blanc also faced controversy after it was found that she used the N-word to describe a customer service agent in a since-deleted tweet. In another tweet, Blanc accused a PQ critic of being a pedophile, though she later apologized. Lisée continued to defend Blanc throughout the controversy, though she lost the race to QS candidate Ruba Ghazal.