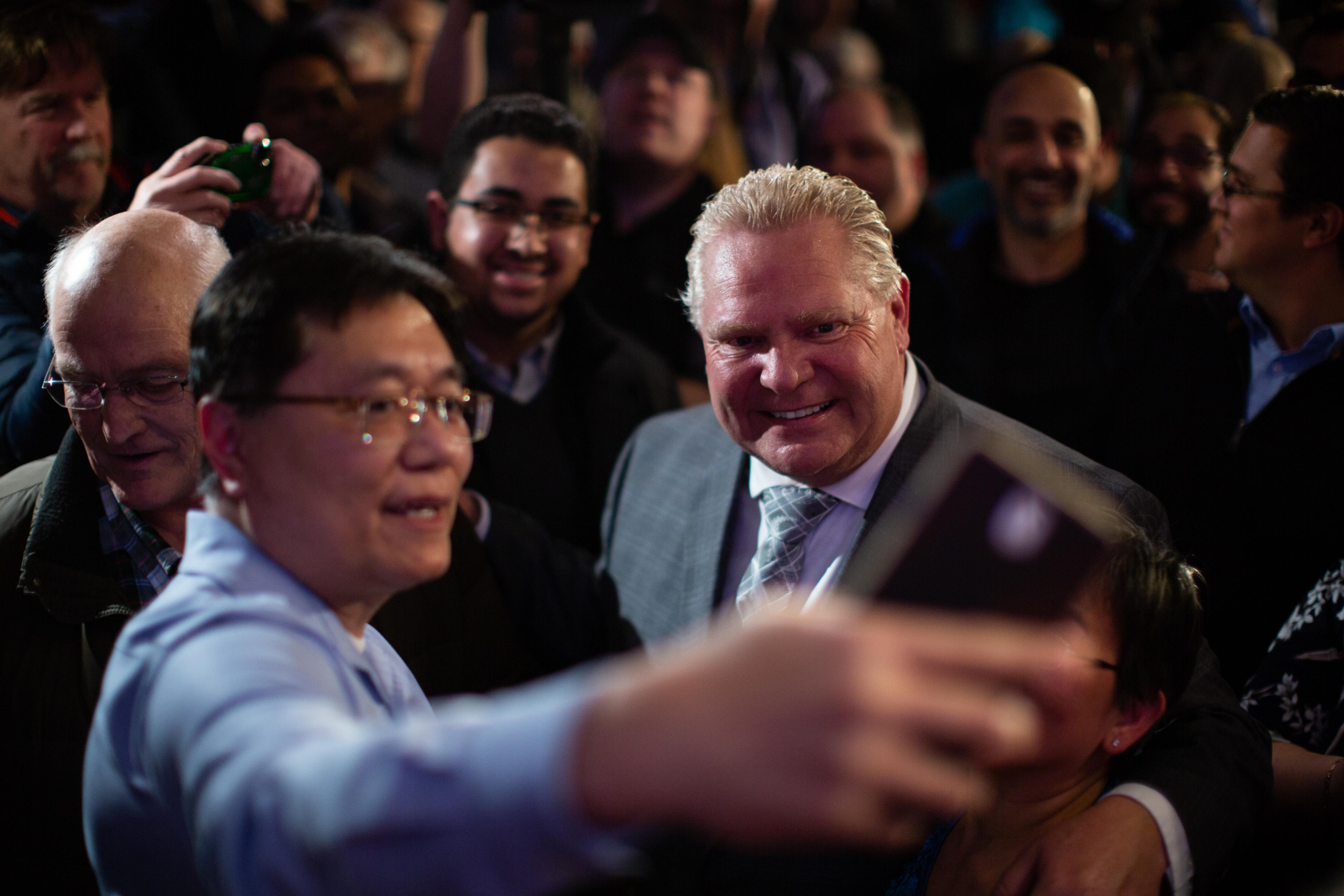 Ontario Progressive Conservative Leader Doug Ford poses for a photo during a rally in Ottawa on April 16, 2018, a couple of months before he was sworn in as Ontario premier. File photo by Alex Tétreault
Previous story
Next story

In Toronto, they were calling on Ottawa to focus on jobs. In Ottawa, they were wondering why Toronto was killing a popular job-supporting program.

On Tuesday morning, two press conferences, occurring within minutes of each other, served to underline the ideological differences between Ontario Premier Doug Ford and Prime Minister Justin Trudeau over Canada’s path to a low-carbon economy.

In the capital, a large industry association said Ford’s decision to end a program that gave out thousands of dollars in rebates to make homes and buildings more energy efficient has brought uncertainty to the sector and preceded a plunge in quarterly sales figures for the geothermal energy business.

“In Ontario right now, we definitely are in a situation where we’re winding down a program that was pretty active and pretty successful,” said Sandy MacLeod, president of the Heating, Refrigeration and Air Conditioning Institute of Canada (HRAI), on Parliament Hill.

The GreenON program in Ontario helped cover the cost of energy retrofits. That program was paid for by Ontario’s cap and trade system, which generated billions of dollars as part of a carbon market with Quebec and California. After taking office in June, Ford has announced plans to kill Ontario’s pollution pricing and his government shuttered the rebate program, which he had ridiculed as a “slush fund” during the election campaign.

Minutes after MacLeod and his colleagues had finished speaking, Ford and other members of his cabinet appeared at Queen’s Park to call on the Trudeau government to “put jobs first,” roll back taxes and abandon its plans to price carbon pollution nationwide.

In his remarks Tuesday morning, Ford promised his government would “continue to use every tool in our disposal to fight the federally-imposed carbon tax.”

“As I always say, it’s the worst tax ever,” said Ford, calling it a “job-killing tax” again. The premier urged Trudeau “to do (his) part to make Ontario, and all of Canada, more open for business.”

But a price on pollution is precisely what helped generate business for firms installing geothermal systems, according to MacLeod in Ottawa, who represents a $7 billion cluster of industries with roughly 50,000 employees nationwide.

Geothermal heating typically installs pipes below the surface to take advantage of the Earth’s constant ground temperature under the freezing line, and uses heat pumps to circulate it to the surface. The Wynne government extended the GreenON program to rebate 50 to 75 per cent of the installed costs for geothermal equipment like heat pumps, insulation, air sealing and windows.

The Ford government is winding the program down until the end of this month. HRAI officials told National Observer that, while the impact of the cancellation of the program hasn't been fully felt yet, year-over-year sales in the last quarter are down "50 per cent" and are expected to drop "significantly further."

“The GreenON program — there may have been lots of faults with it — but it was very successful from a geothermal perspective,” said MacLeod. “That has literally come to a grinding halt.”

Federal Environment and Climate Change Minister Catherine McKenna has said Ottawa would distribute $420 million in Ontario from the "Low Carbon Economy Fund" directly to cities, hospitals, universities, schools, and businesses to help with energy efficiency programs and other carbon-reduction measures after Queen's Park got out of the rebate business.

However, Ontario Environment Minister Rod Phillips has complained that the federal carbon program is "not effective" and that McKenna has not met with him to reach a compromise.

Phillips has been conducting a consultation on Ontario's climate plan, which ended on Nov. 16 and is expected to be made public by the end of November. He told reporters on Tuesday that the ministry has been reviewing "over 8,000 ideas from a wide range of participants" who submitted their ideas. Despite some "vehement opposition" to Ontario's cancellation of the cap and trade program, Phillips said that he has been undergoing a "quite constructive" consultation with stakeholders and Ontarians.

The upcoming plan will be a "a broader plan," Phillips told reporters. "It’ll have quote a focus on climate, on mediation and adaptation, but it’ll talk to the broader objectives as well," including the issues raised by Ontario's environment commissioner earlier this month about severe water pollution.

'I am zoned in on this province'

At Queen’s Park, Ford urged Trudeau to follow his lead on the economy, which his government laid out in a fall economic statement released on Nov. 15. That statement promised to restore accountability and transparency but went on to cancel or curtail three major independent government watchdogs and increase the private donating limits to politicians.

To date, Ford has challenged the federal government on several major issues, including the federal price on pollution and the issue of asylum seekers. Most recently, it has found itself at odds with the Trudeau government as well as with federal Opposition Leader Andrew Scheer's Conservatives over decisions to eliminate a French-language commissioner and cancel plans for a new French-language university in Ontario.

Ford asked the Trudeau Liberals to “roll back (their) tax grab on small businesses” and ensure that Canada remain competitive with United States, its biggest trading partner, by allowing businesses “to fully expense capital assets.” Doing so was “absolutely critical,” Ford said.

“My message to the prime minister is this: I want the prime minister to know that whatever our differences on other issues, if he decides to finally put jobs first, he can count on a steadfast partner in our government,” Ford said.

“It is not too late for him to say to helping create good jobs here in Ontario and across this great country. I look forward to his response tomorrow,” he said, referring to the expected fall economic update from Finance Minister Bill Morneau.

Ford also insisted he has no national political ambitions and isn’t vying for Trudeau’s job. “No, what I want to do is fix the province,” Ford told reporters surrounded by five members of his cabinet on his birthday.

“I have a great team. I am zoned in on this province, nothing else, not federally — nothing but fixing the financial mess that we inherited and I’m going to focus on that,” the premier said, emphasizing again that his main goal was to tackle the $14.5 billion deficit in the province, a number critics and experts have said is exaggerated.

“As long as Prime Minister Trudeau wants to work with us … I’ll welcome him with open arms,” the Ontario premier said. “I’m not gunning for him. He has his differences; I have mine. But, at the end of the day, we want to do the best thing for Ontario and I think we’ll come to a good conclusion here.”

Earlier in Ottawa, HRAI chair David Weishuhn, appearing alongside MacLeod, said “recent and pending policy reversals at the provincial level” — which he acknowledged included Ontario — “may have the effect of losing some of the momentum that was building” in terms of investing in green energy.

That will make it tough to heat buildings with natural gas, which is where almost half of the energy use in Canada’s buildings is coming from.

Energy-efficient buildings are a major part of Canada’s climate strategy: almost a third of energy used by consumers takes place in buildings, and 17 per cent of Canada’s carbon pollution comes from buildings and homes.

“When you have policy changes along the way that stop one program, take a step back, and get people together to come up with a new program — you may lose a year, you may lose 18 months. These deadlines, while they sound far away...that is a massive change to deal with in the economy, especially in provinces like Ontario, Manitoba and Alberta that are very gas-reliant,” said MacLeod.

The organization is now looking to the federal government to “explore and fund more aggressively” energy efficiency policy measures that are “national in scope.” They are calling for Ottawa to fully fund a package of initiatives like the development of building codes, training support and “market readiness” demonstrations to the tune of $20 million over five years.

They would also like to see a federal energy efficient tax credit, commercial building owners to treat energy performance improvements as operational instead of capital expenses in their taxes, and more support for incentive programs.

Doug Ford promotes extinction policies. Human, animal, vegatative and planetary extinctions. Everything he has done is extinction. Doug Ford is anti-life, he is a species abortionist. It is time to confront his obstructionism. Another false majority.

I agree completely. How can

I agree completely. How can he say that he is "for the people" when he is killing green jobs and wasting the millions that cap and trade was pumping into our economy - repairing schools and rebuilding infrastructure? His government is a disaster for us, and our children. Anti-life and a series abortionist. Very accurate.