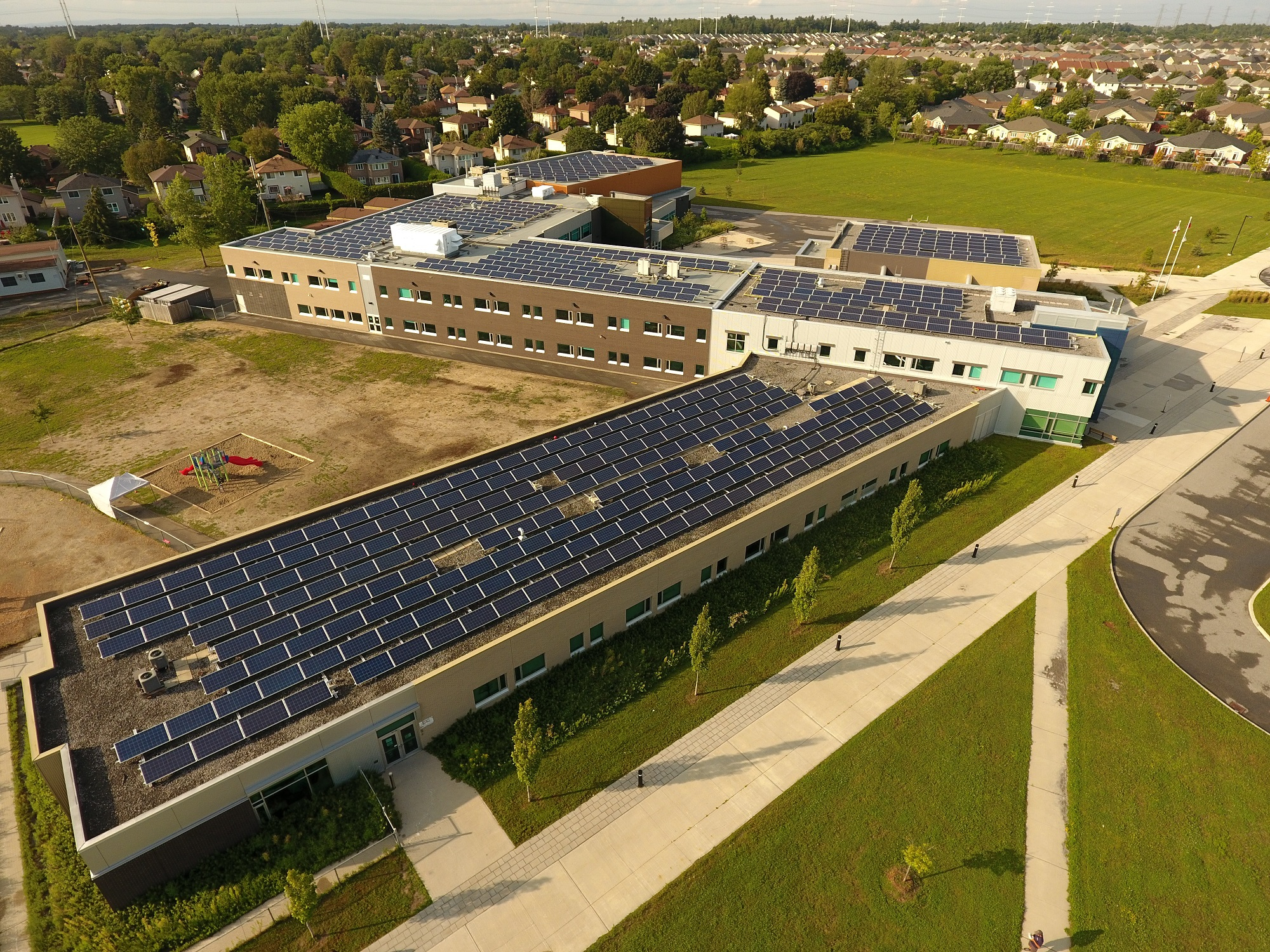 A solar project by iSolara at Maurice-Lapointe school in the Kanata area of Ottawa in August 2017. Photo by Alex Tétreault
Previous story
Next story

Canada’s largest stock exchange is in the process of joining a voluntary United Nations body that promotes greening financial markets and environmental disclosure.

In fact, Toronto is home to one of the last top stock exchanges in the world by market capitalization that is not a member. London, Paris, Brussels, Frankfurt, Sao Paulo, Mumbai, Tokyo, Busan, Hong Kong, Shenzhen and Sydney all host major stock exchanges that are members.

The objective of the UN initiative is to align market signals with public policy. Canada has committed to the Paris Agreement goal of cutting back on harmful carbon pollution that contributes to climate change, as well as the UN’s sustainable development goals which include climate action. Carbon pollution is generated when fossil fuels like oil, gas and coal are burned for their energy.

Toronto is a fossil fuel leader when it comes to exchanges. TMX Group, the owner of the stock exchange, has stated that "more oil and gas companies are listed on Toronto Stock Exchange and TSX Venture Exchange than any other exchange in the world." (The name, TMX Group, has no relation to the Trans Mountain pipeline expansion project.)

The big banks in Canada are known as strong financial backers of the country's fossil fuel industry. Canada also holds the world's third largest reserves of crude oil after Saudi Arabia and Venezuela.

Shane Quinn, head of communications and public affairs for TMX Group, told National Observer Jan. 17 that “Toronto Stock Exchange is currently in the process of joining the UN Sustainable Stock Exchanges Initiative.” He added "the news will be made public. I have no specifics beyond that to share at this point."

It would be the second Canadian member of the program, after competitor Aequitas NEO Exchange, also based in Toronto.

The UN initiative has coincided with mounting pressure from environmental activists around the world who have pushed financial markets to divest of fossil fuel holdings and focus investments on the new clean economy to avoid burning fuels that will push the Earth's climate past a tipping point of irreversible damage to the planet's ecosystems.

The Guardian has reported that fossil fuel divestment campaigns started on U.S. university campuses in 2011, but now span 37 nations around the world.

The UN initiative is not legally binding and exchanges are not expected to enter into any financial commitments. The secretariat running the organization expects exchanges to operate in good faith. Failure to abide could mean the exchange is tossed out.

Exchanges are expected to engage with the companies they list, as well as investors and regulators, in order to promote long-term sustainable development and improve corporate disclosure related to environmental and social issues.

Launched in 2009, the UN Sustainable Stock Exchanges Initiative is a partnership between several UN programs. Stock exchanges join by having a senior representative sign a letter that endorses a public statement.

The idea for the Toronto Stock Exchange to join the UN initiative is one of the many recommendations contained in a report released this week by the Winnipeg-based independent think tank, the International Institute for Sustainable Development.

The report suggested a number of tweaks to Canada’s financial “ecosystem,” including to its central bank, federal legislation and banking and securities regulators, that would mandate greater disclosure from companies as to how climate change will impact their revenues and profits.

The IISD said there are insufficient requirements in Canada for annual reports or other documentation that companies produce for investors to include this type of climate risk assessment. This means that banks, pension funds and others aren't easily lining up their lending and investing with climate science.

The Intergovernmental Panel on Climate Change has concluded that global mean sea level will rapidly rise during this century. Scientists say climate change will make extreme weather events like floods, droughts, heat waves and wildfires more frequent and more intense. Other effects are expected to occur such as increased precipitation and wilder temperature fluctuations in many areas.

These kinds of changes will affect a wide range of infrastructure and other assets owned by businesses or governments. Logging companies, as well as oil and gas operations that rely on the stability of the boreal forest will have to contend with large parts of it coming under risk from increased wildfires, drought and insect infestations.

The Fort McMurray wildfire cost Canada roughly one per cent of its entire national GDP in the second quarter of 2016, according to the Bank of Canada. “This event was a setback to Canada’s return to full (economic) potential,” deputy governor Timothy Lane said in 2017. Agriculture will have to contend with more droughts, Lane added, while the mining sector can’t operate as easily when ice roads are inaccessible.

The Insurance Bureau of Canada has also highlighted statistics from a new report, which found that severe weather caused $1.9 billion in insured damage in 2018.

Ok, I guess. Or another

Ok, I guess. Or another opportunity to periodically fly to exotic places for talk-fests?