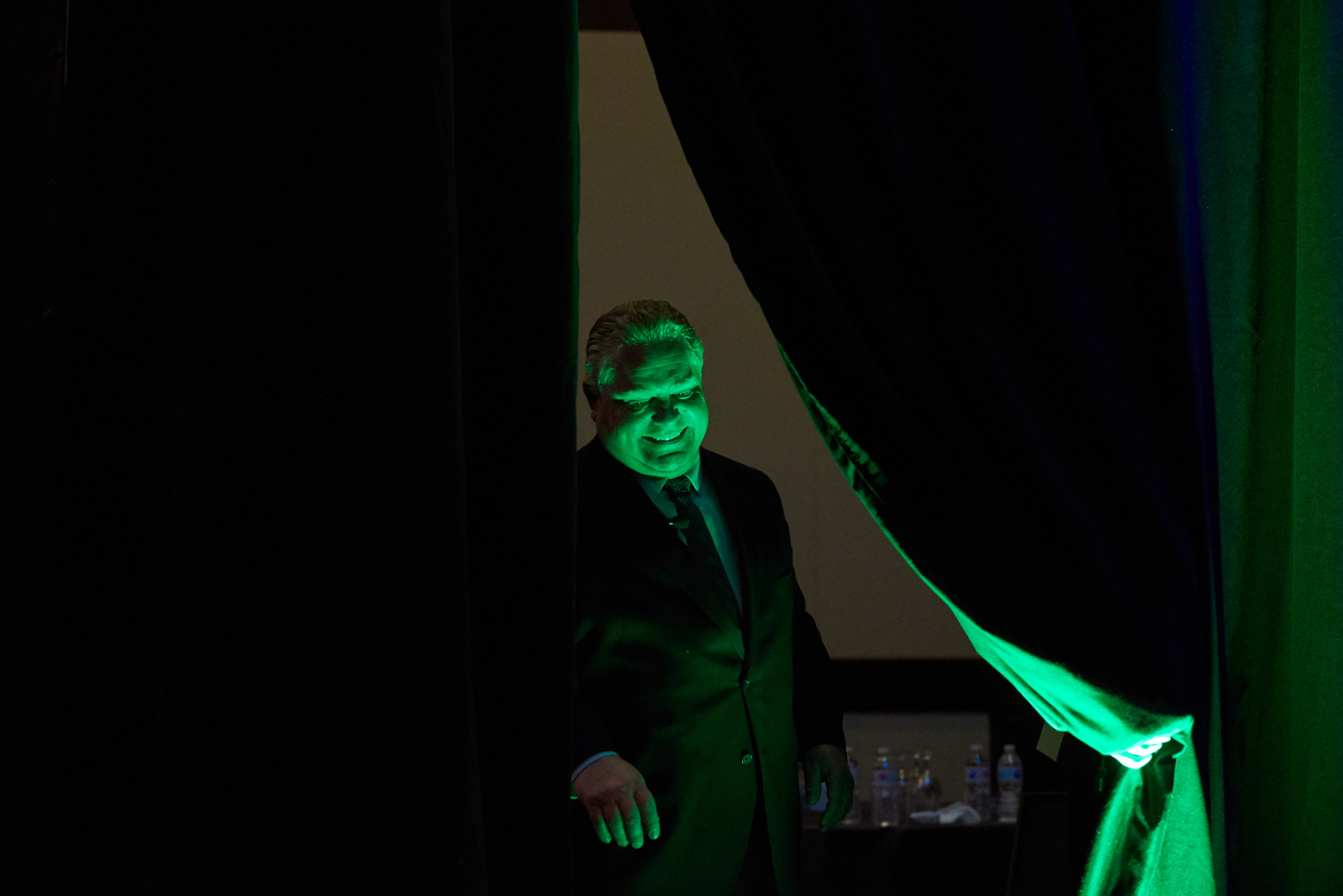 Ontario’s highest court continued to push for exact details Thursday about whether Canada's first attempt at a national climate policy was constitutionally sound, and whether it was overreaching in its powers to impose a carbon price across the country.

The four-day hearing in the Ontario Court of Appeal on the Doug Ford government's constitutional challenge of the federal carbon pricing program ended Thursday the same way it began — with Ontario and Ottawa butting heads over who had jurisdiction over the reduction of greenhouse gas emissions.

"I'm asking you what's the future of this federal power?" Huscroft asked.

In other words: Does Canada have the constitutional authority to impose a carbon price in a province like Ontario that does not want it? And how far can it take that authority?

The answers they received were repetitions of the arguments the court heard all week, with Ottawa saying the massive dimensions of the climate change challenge are too great to leave to the provinces to deal with.

Ontario's closing remarks focused on how the federal carbon pricing program was not designed to be a temporary measure. Lawyer Josh Hunter said that the escalating nature of the carbon price over time, and the fact that the measure of its success was in looking at the "cumulative atmospheric concentrations" and "total national emissions" suggested there was no end date to this policy.

Canada was gunning to remove "every little bit" of pollution, Hunter said, questioning whether climate change is an emergency that justifies federal action in a manner that removes provincial powers over its own industry.

"(The federal government's) behaviourial incentives can’t stop because then there will no longer be that signal to industry," Hunter told the bench in his closing arguments. "Just like income tax…we’ll be paying carbon tax many, many years in the future."

It was not clear if he was advocating against the legal basis for income tax.

The federal government's carbon price "governs a broad range of activities that are in provincial jurisdiction," Hunter said, citing activities such as heating homes and driving kids to hockey games (examples the Ford government also uses in their messaging to oppose the carbon price). "It is not appropriate for a federation."

Ottawa's crown attorney Sharlene Telles-Langdon said the federal government's powers were limited by the fact that "the cumulative dimensions of GHG emissions is a matter of national concern." If that wording was too broad or vague for the court, the justices were welcome to change it, Telles-Langdon said. But any new wording would have to convey that Canada is tackling "the interprovincial and international pollution caused by greenhouse gases" and that there was a "provincial inability" to deal with a problem this large.

A national price on carbon, Telles-Langdon argued, would reduce disparity between provinces and ensure there was no negative impact on inter-provincial competitiveness.

She gave an example: Gas stations in Alberta, where there is a carbon price, may be inclined to get their fuel from a distributor in Saskatchewan, where there is no carbon price. This gives the fuel distributor in Saskatchewan, in this example, a competitive advantage, and motivating a "race to the bottom" where provinces lower emissions standards to entice industry.

Telles-Langdon also clarified that the carbon price is not a percentage, but a charge based on price per ton of emissions. A minimum national price reduces the advantage a province gets from taking no action to reduce greenhouse gases, she said, adding that neither Ontario nor any intervener had presented evidence of confict between the national carbon price and the province's ability to take its own climate action.

"The dominant purpose is not to raise revenues but change behaviour," she said.

Justice Alexandra Hoy responded that the court "might need a longer sentence" to capture all this.

'What's the incentive for Alberta, Quebec and Ontario to do things that are going to be responsible for horrible problems up north?': Ontario judge

Since the court proceedings began on April 15, Jason Kenney — a partner in Ford's anti-carbon tax alliance — has been elected as premier of Alberta, and Ontario has released an anti-carbon tax ad with the sound of clinking coins that leaves out vital information about the federal carbon rebate and the province's scant climate plan.

This week, Premier Ford's office has also hastily edited and sent out to his 127,000 Twitter followers a video clip of one justice's tough questions to Ottawa's crown attorney about why Canada was trying to force a carbon price on a province where greenhouse gases have already been reduced significantly

“We don’t care how they’ve achieved it,” Justice MacPherson says in the clip of a much longer inquiry about the limits of federal powers and why they're not being directed on provinces where more work needs to be done in regards to climate change action. “(Ontario has) achieved reductions of 22 per cent. Why don’t you just leave them alone?”

“We've done more than our fair share to meet emissions reduction targets, but the federal government still wants to punish Ontario with a job-killing carbon tax,” says Ford’s tweet, which takes MacPherson’s queries out of context.

Since the court proceedings began, the federal government has released its latest climate change report to the United Nations, which found that pollution from fossil fuels in Canada continues to grow by staggering amounts, with the oilsands responsible for more carbon pollution than all of British Columbia or Quebec in 2017.

On Wednesday, 14 interveners — among them some provinces, Indigenous groups and environmental and business organizations — lined up to defend or attack the federal law, with most siding with Ottawa.

Their arguments were top of mind in the justices inquiries Thursday when questioning Ontario on why a national climate plan would be such an imposition when the issue of climate change was so large.

"The worst impacts, by far, in Canada off greenhouse gases are in the three northern territories," Justice James MacPherson said Thursday, adding that these territories are facing a temperature increase of 3.5 degrees. "The biggest emitters are Ontario, Alberta, and Quebec. What's the incentive for Alberta, Quebec and Ontario to do things that are going to be responsible for horrible problems up north?"

MacPherson cited news reports about caribou moving further away from their traditional habitats in the Yukon due to the impacts of climate change.

"Is that going to be the lead item in Ontario news? Hardly. Is that going to be in the minds of Ontario government? Hardly," he said. "So does it really work to say that 13 governments are going to have to do this together? Some of them won't want to do it, at all. The national government sees the whole picture and says 'we need to respond as a nation to this, and here it is'."

"We need to respond in a way that respects our constitution," replied Ontario's lawyer, Hunter, adding that the "North" referred to by MacPherson shoud not just encapsulate the territories but the northern parts of each province.

Chief Justice George Strathy asked Hunter to clarify if his argument was suggesting that "provinces also have a right not to do anything" to reduce greenhouse gas emissions.

MacPherson pushed Hunter to clarify further why Ontario believed that greenhouse gases, which may have been "a local concern" in the past, had not reached "a point of national concern."

Greenhouse gases are "not salient, indivisible and distinct," Hunter said, referring to concepts that define the national concern as elucidated in R v Crown Zellerbach Canada Ltd and other cases that have built precedent on sections 91 and 92 of the Constitution Act, which cover power-sharing between provinces and the federal government. Recognising them as such "would unbalance the federation," he said.

Strathy remained skeptical. "So, even though, in theory, they might be a concern for all Canadians and they've gone beyond, perhaps, what the province can regulate, they don't meet your tests," he said to Hunter.

"A matter may be of concern to the nation...but that does not mean it is a matter of federal jurisdiction," Hunter replied.

A decision by the five-justice panel is expected to take several months.

"Throughout the hearing, supportive parties reinforced the reality that climate change is a national and global crisis, and that Canada—including all provinces and territories—must continue to reduce greenhouse gas emissions and work to build a clean-energy economy."

Interesting article. Thanks for covering these important hearings.

Adding Catherine McKenna's submission on the end seems superfluous to me.

It is educational and informative to read the lines of questioning of the judges; they unveil interactions in various pieces of legislation and principles. It gives me confidence in the rule of law contrasting the incisive intelligence of these judges' questions with the grandstanding of elected or politically appointed judges in other jurisdictions.

Thanks for reporting this way.