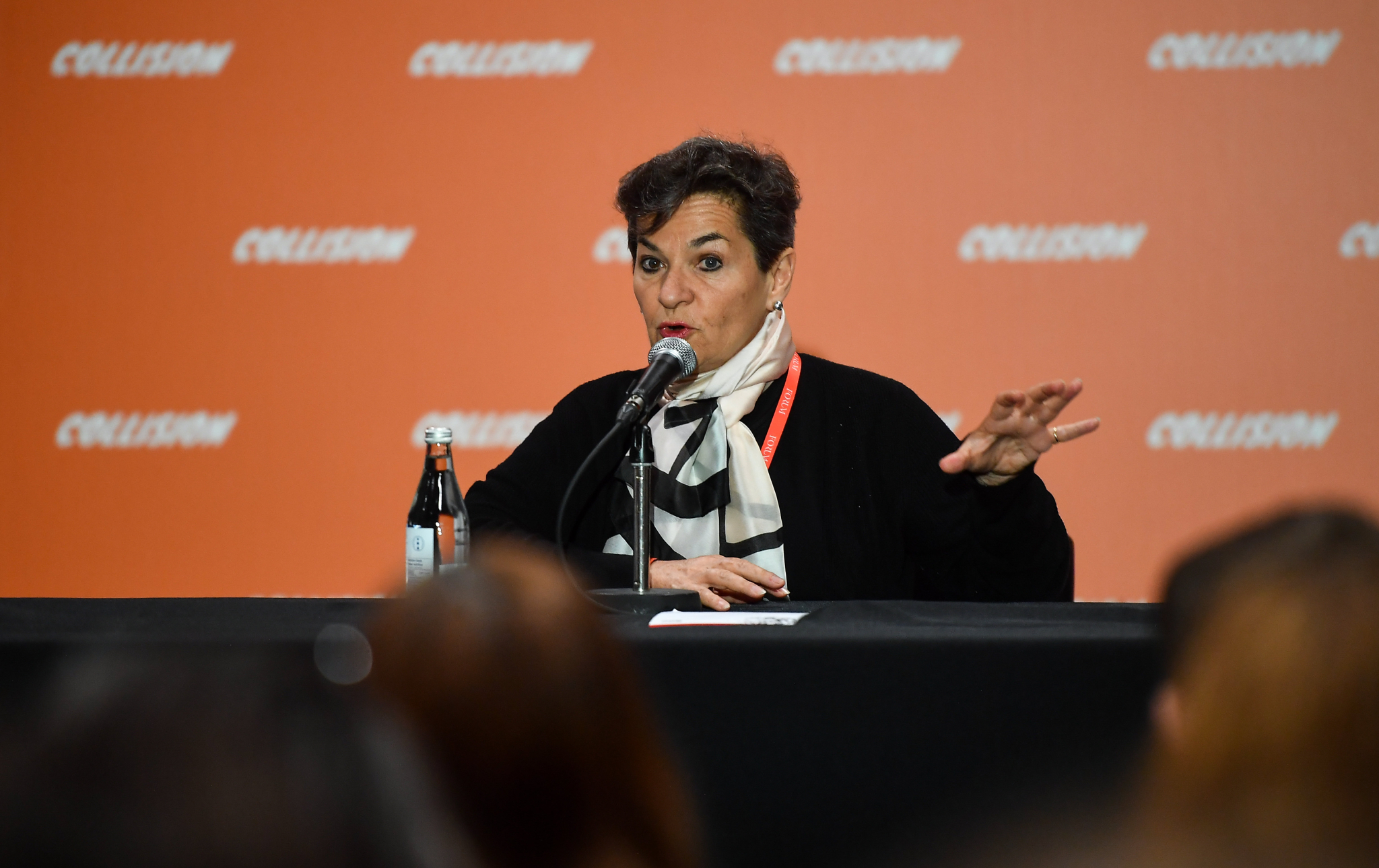 Christiana Figueres, Convenor of Mission2020, during a press conference at Enercare Center in Toronto on May 22, 2019;. Photo by David Fitzgerald/Collision via Sportsfile
Previous story
Next story

Governments that fail to provide responses to the global climate crisis are doing so "at their own peril," former United Nations climate chief Christiana Figueres said during a visit to Toronto.

Figueres, a central figure behind the 2015 Paris Agreement, made the comments as she called for governments and tech companies to "go exponential" in their efforts to tackle the global climate emergency.

Her remarks come weeks after several reports have portrayed devastating impacts of the climate crisis, including the near extinction of one million species worldwide,100-year floods in Ontario and Quebec and raging forest fires in western Canada. In one of those reports, federal government scientists said that global greenhouse gas emissions would need to be reduced to "near zero" in the current century in order to avoid some of the harshest impacts of climate change.

Under Premier Doug Ford's Ontario government, the province has cancelled a series of policies, related to taking action to address the climate crisis (including slashing cap and trade, the 50 Million Tree Program and flood management funding), promising instead to introduce something new in its place. It introduced an outline of its new plan in November, without firming up details.

Similar actions are underway in Alberta where Premier Jason Kenney's newly-elected United Conservative Party government has already tabled legislation to scrap the province's carbon tax and announced it will dismantle elements of the former NDP government's climate change policies and replace them.

"There is no doubt that the global economy is decarbonizing. There's no doubt that those corporations that fail to participate in the solution, will simply fail to exist. And so those governments that want to protect those industries will not be able to do so in the end, and are only calling on their own demise," Figueres told National Observer in an interview.

"When the river is flowing in one direction and the entire global river is flowing towards decarbonization and someone takes a bucket and says, I'm going to start to throw water up the river, well, good luck on that," she said. "It doesn't change the course of history and it only slows down the progress and the thrust forward of those industries in your jurisdiction."

Figueres led the UN's global negotiating process that culminated in the 2015 Paris climate change agreement. She was in Toronto to visit the Collision Conference, an annual gathering of global technology industry leaders and experts, to talk about how technology was "the portal to addressing climate change."

Delighted to be joining the conversation here @WebSummit #Collision2019. Tech leaders agree. We can solve climate change and get clean air for everyone. pic.twitter.com/gcfjdAKAIY

She currently heads up Mission 2020, a global campaign which aims to push countries to rapidly scale up ambition on tackling climate change by 2020, when nations are required to submit their decarbonization plans as part of the formal adoption of the Paris Agreement.

Ahead of tackling high carbon sectors such as oil and gas, shipping and aviation, and auto manufacturing, Figueres emphasized that the top priority remained ensuring that governments and industries exercised "self responsibility."

The responsibility was made "lucidly clear" in October 2018 when the UN Intergovernmental Panel on Climate Change issued their report of the devastating impacts the world will experience if global temperatures were allowed to go above 1.5 degrees.

"We have to take 1.5 as our new north. That is difficult," she said, noting that reducing investments and recalibrating policies is a complicated matter.

"That is not a responsibility than any of us want to have on our shoulders," Figueres said.

While she explained that Canada has been "very responsible, very helpful for the Paris agreement," and the Justin Trudeau Liberal government have "marked a sea change from the previous administration," showing support for other governments as well in their decarbonization efforts, it can do more.

'This is actually the moment for total disruption'

Figueres remains optimistic because companies and financial institutions are embracing the 1.5 degree marker.

"Because it is so ambitious that it really unlocks ingenuity and total disruption, which is something that a lot of people actually quite enjoy and are very capable of," she said, gesturing to the Toronto Collision conference. "And this is not the moment for any gradual shift or any gradual change, this is actually the moment for total disruption in order to lay the groundwork for a much safer world."

She lists all the accomplishments the technology sector has made around the world: Harley Davidson is coming out with its first silent, electric motorbike. Most car manufacturers have set a date to move their automotive production services to electric.

But there are just as many challenges, Figueres notes. Electric vehicles won't make as big of an impact if we don't have clean grid. Right now, seven million people are killed every year because of air pollution, she said.

"Cities that are being built today need to be people friendly and not necessarily cement friendly," Figueres said. "They need to be community organized and not highway organized."

"Infrastructure policy is not being as aggressive as it should be," she added.

She also said that land-use policies are the weakest, in terms of tackling climate change. She said government could address this by taking action in areas such as climate-smart agriculture, reforesting degraded lands, restoring and regenerating degraded lands — everything that has to do with soil fertility and aquifer management.

Land-use changes were also identified in the UN biodiversity report as the key driving force of the extinction of one million species around the world.

Think that #ClimateChange is the only crisis facing #Nature?

The @IPBES #GlobalAssessment Report is the first to rank the relative impact of drivers of #biodiversity loss.

"I think it's become more normalized to apply advanced technologies and to continue to develop technologies for infrastructure and for energy and for transport. But we have a dearth of technologies that are going to help in the land use sector," Figueres said.

Technology can help solve this failure and, in fact, quicken the rate at which this sector responds to the climate crisis, she said.

"The big question that we’re facing right now is which of these two exponential curves is going to win the race," Figueres said. "Will we be succumbing to the threats of climate change because they are coming upon us faster and faster… or will we be able to grow the technological response in order to be able to at least abate the worst parts of climate change?"

"That is a race we have to win," she said. "In this century, we can’t have technology growing just for growth’s sake. It has to be purpose driven. There is a no other way."