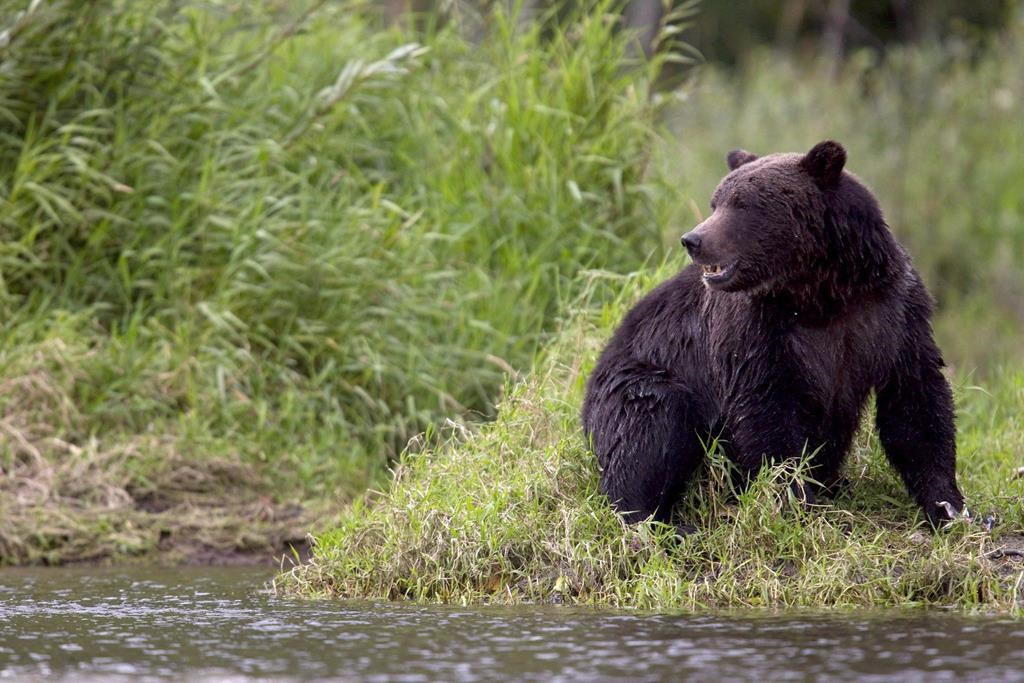 A grizzly bear is seen fishing along a river in Tweedsmuir Provincial Park near Bella Coola, B.C. on Sept 10, 2010. File photo by The Canadian Press/Jonathan Hayward
Previous story
Next story

A pair of American tourists were pinned between rushing rapids and an aggressive grizzly bear when wildlife officers arrived to rescue them from the rugged tundra of the Northwest Territories earlier this week.

Lee Mandeville, one of the officers, said the bear ripped their canoe to shreds, leaving the travellers with no mode of transportation. The bruin also destroyed their tent and took their food.

"By the time we arrived they were out of their bear spray and it was just perfect timing," he said from Yellowknife on Wednesday.

"They were under a lot of distress. They were worn out, exhausted, because they stayed up all night on bear watch."

RCMP in Yellowknife got word of a distress call Sunday from two people stranded around Hanbury Lake, about 500 kilometres east.

The Mounties called the territory's Environment and Natural Resources department for help the next morning. It took the wildlife officers two or three hours to get to the spot by helicopter.

As they came over the hill, they saw what was left of the couple's camp. The bear was still approaching the man and woman aggressively.

"All they could do is just sit and conserve energy and wait and hope for help."

The helicopter scared the grizzly away long enough for the couple — a husband and wife who seemed to be in their early 50s — to get into the helicopter.

"They seemed relieved that we were there and (they were ) not very talkative, just exhausted."

The bear was killed because it posed a threat to humans, Mandeville said, adding it was probably the same animal that had been harassing people in the area for years.

The rescue took place in an area popular with outdoor enthusiasts known as the Barren Grounds. Travellers get there by charter plane and then paddle along the area's many rivers and lakes.

"It's pretty abundant with wildlife and fish and beautiful waterways and terrain," said Mandeville.

The rugged area — dotted with shrubs and small, spindly trees — can be unforgiving and visitors should do their research and have a solid plan before venturing out, he said.

Mandeville said other than not having a firearm with them, the couple seemed to do everything right.

"Unfortunately they just came across that problem wildlife and it ended their trip pretty quick."

The RCMP got the report through the International Emergency Response Co-ordination Center. It is run by Texas-based company GEOS to help co-ordinate search and rescue operations around the world for people using satellite emergency devices. Mandeville said the couple sent a distress signal using an inReach device.

"The travellers were well prepared and had planned to bring a communication device with them on their trip, which definitely helped them with their misadventure," RCMP Staff Sgt. Yannick Hamel said in a statement

"We can't stress enough the importance to be prepared when venturing in the wilderness as anything can happen."

'Risk of bear mortality:' Study finds people, not roads, bug grizzlies the most