With New Perennial Grain, a Step Forward for Eco-Friendly Agriculture 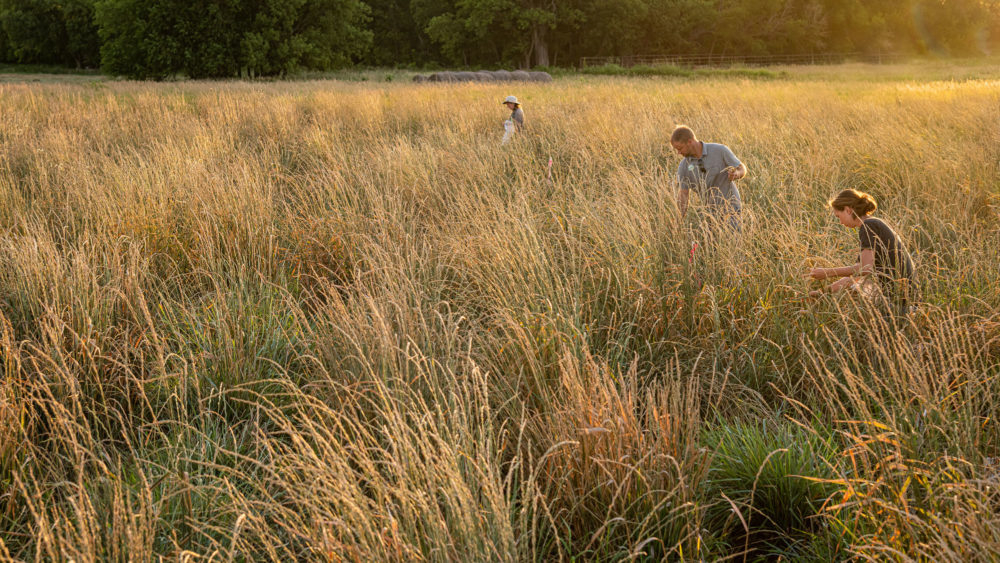 Harvesting heads of Kernza, a newly developed perennial grain, on a research plot in Salina, Kansas. The Land Institute
Previous story
Next story

Some 40 years ago, Wes Jackson, a plant geneticist, founded The Land Institute on the prairie near Salina, Kansas. Concerned that modern agriculture destroyed native grasslands, he asked a question that came to define his life: How can we harness the inherent strengths of the prairie ecosystem — the natural resistance of native plants to insects and weeds, the ability of those plants to grow perennially, and their evolved resistance to cold and drought — and marry those traits to the task of growing domesticated crops for food?

Jackson, the recipient of a 1992 MacArthur “genius grant,” set out to create a new kind of farming he called “natural systems agriculture,” which has the “ecological stability of the prairie and a grain and seed yield comparable to that from annual crops.”

After four decades of breeding and testing, the institute has introduced its first commercial grain, a trademarked variety called Kernza, a domesticated wild grass — intermediate wheatgrass — that has a long, slender head that resembles wheat seeds. Described as sweet and nutty, it is now being made into a cereal called Honey Toasted Kernza by Cascadian Farms, and Patagonia Provisions — an offshoot of the clothing company — has brewed it into beers, including Long Root Pale Ale. Both are being produced now in limited runs.

The development of Kernza is being held out as a prime example of a new way of doing agriculture that borrows from the perennial nature of the wild prairie. “The goal is to mitigate a lot of the problems inherent in annual grain farming systems,” said Tim Crews, research director at The Land Institute. For example, he noted, “Farmers write off 50 percent of their fertilizer as not being taken up by the crop.”

In a 2017 interview with Modern Farmer magazine, Jackson put it this way: “We are trying to get agriculture away from the extractive economy and into the renewable economy.”

Efforts are accelerating to develop a kinder, gentler agriculture to adapt to a changing world.

There is a growing movement these days for agrarian reform, from grain farming on the prairie, to agroforestry, to raising livestock more sustainably. That reform has been propelled, in large part, by the fact that farming is one of the most ecologically destructive things that humans do. Plowing large fields every year causes a mammoth loss of topsoil; erosion removes 30 tons of soil per hectare per year, on average, according to one study.

Farm field runoff with high nitrogen content spills into water bodies like the Gulf of Mexico and the Baltic Sea, creating giant dead zones; Crews noted that such zones now form at the mouths of 400 rivers around the world. The widely used herbicide, Roundup, is implicated as a carcinogen. Aquifers across the United States are being depleted. Monoculture crops are subject to diseases that can wipe them out. The fungus Tropical race 4, for example, has decimated the global Cavendish banana crop — the kind we all eat — largely because they are a genetically identical fruit grown in vast one-crop plantations. And every time a field is plowed it releases stored carbon into the atmosphere — agriculture is responsible for 9 percent of all greenhouse gas emissions.

While some of the ideas for more responsible ways to farm have been around for a long time, the growing specter of climate change has focused attention on these approaches as a way to sustainably feed a growing population in a warming world. Food security is a serious and growing global issue. Weeds, fungi, and pests are predicted to accelerate with warmer weather; food is becoming less nutritious; and prolonged drought and high temperatures are expected.

Just last week, the Intergovernmental Panel on Climate Change released a report warning that the ways we treat the land, especially modern farming methods, are an important contributor to climate change.

As a result of these growing concerns, efforts are accelerating to develop a kinder, gentler agriculture to adapt to a changing world.

“People are hungry for knowledge about how we’re going to survive the next century because of climate change,” said Jo Ann Baumgartner, executive director of the Wild Farm Alliance, which encourages more natural, environmentally friendly styles of farming, something known as agroecology. “Conservation, restoration, rewilding — they are all part of that because it offers so many different kinds of benefits.”

Dozens of researchers and other experts have signed a letter initiated by the Union of Concerned Scientists urging more funding for research in agroecology, which they define as a field “that applies ecological principles and relies, to the greatest extent possible, on ecological processes to address current and future farming challenges.” Current funding is “drastically inadequate,” the authors said.

Agroecology is in essence a big-picture look at agriculture, including consideration of the fact that it is part of larger natural and societal systems. While traditional agriculture often passes on its costs to society, agroecology is based on “understanding and managing ecological processes and biological functions to increase and sustain crop and livestock productivity… and build soil fertility, while minimizing harmful impacts on soil, air, water, wildlife, and human health,” according to the letter from researchers. It’s not only thought of as ecologically sound, but even regenerative, helping reclaim ecosystems damaged by past poor farming practices.

That’s the goal of The Land Institute.

Kernza is a domesticated version of intermediate wheatgrass, a wild relative of wheat.

Though it is being grown and sold commercially, Kernza is not yet ready for prime time and is available only in small batches. Last year, it was produced on just over 1,000 acres. That’s because the yield of Kernza is only a third to a tenth of wheat. It will take years more of breeding to increase the yields. The institute is developing other perennial crops, including rice and sorghum, though none are being grown commercially.

For The Land Institute though, perennialism is only part of the goal. Ultimately, it wants to create a self-sustaining perennial polyculture of diverse edible plants, from sorghum to wheat to wild sunflowers, which are grown for their oil. Lupines or clovers could be grown to fix nitrogen and obviate the need for artificial fertilizer. Without having to plow every year, the large root systems of these plants would develop and they would be able to reach water far beneath the surface, lessening soil erosion. And without annual plowing, soil carbon would remain in the ground.

While The Land Institute works on the prairie end of sustainable agriculture, agroforestry is another aspect that works with forest ecosystems. Agroforestry, generally, is the use of trees with crops to enhance biodiversity, prevent soil erosion, reduce wind damage, and improve soil conditions. Rather than clearing all trees off the land and planting rows of crops, forested farms seek to understand how trees and crops can work together.

The simplest kind of agroforestry is planting shade trees over and among crops. Amanda Rodewald, a researcher at the Cornell Lab of Ornithology, has studied coffee crops planted beneath trees. They can be a win-win situation, she says, providing more income for farmers and a healthier ecosystem.

Some, however, say that trees can do even more. Gloria Flora is a former U.S. Forest Service supervisor who, with her husband Marc, runs a 65-acre agroforestry farm in the Huckleberry Mountains near Colville, Washington. She founded the TerraFlora Permaculture Learning Center, which operates a demonstration farm and teaching center. Flora’s approach — which follows permaculture principles of understanding and capitalizing on natural processes — seeks to create a complex forest ecosystem that can be harvested.

It is derived in part from traditional indigenous forest gardens worldwide that use techniques that have been practiced for centuries. Mayan people, for example, still grow what are known as biodiversity gardens, unplowed but cultivated gardens in the forest that feature a wide range of crops, including many kinds of fruit trees — avocado, citrus, mango — and ground crops such as the “three sisters”: maize, beans, and squash. The Mayans also grow many sacred and medicinal plants in the mix.

Agroforestry with permaculture principles involves creating a kind of agro-ecosystem or a forest farm. Each separate agricultural ecosystem is called a guild, and Flora’s farm has five (unnamed) guilds. The guilds are based on how plants dovetail with others to create a designed natural ecosystem that produces a wide range of food and fiber (instead of just one crop), naturally fertilizes, reduces pests using domesticated animals, consumes less water, and stores carbon.

Each guild has seven layers of plants, a scheme that mimics the way nature forms layers — a vertical and horizontal strategy rather than the solely horizontal strategy of traditional farming. In a classic forest garden, tall trees usually form the canopy. In Flora’s farm, those are larch, pine, and other conifers. There is a second lower tree layer of trees and, beneath that, usually nut or fruit trees, and then a shrub layer growing currants and berries. Beneath that are perennial herbs and vegetables, with roots and tubers underground; ground cover plants; and, lastly, vines and climbing plants.

Shade from the overstory provides protection from the sun and wind to seedlings below, while leaves from deciduous trees turn into mulch and compost. Herbs such as mint and nasturtiums are planted where they best either repel pests or attract beneficial insects. Edible mushrooms grow in the understory. Chickens, turkeys, and ducks eat pests, and their feces fertilizes plants. Flora even has an ox, 6 feet 4 inches at the shoulder, named Hercules who eats weeds and underbrush.

This approach solves a lot of agriculture’s problems. It uses far less water, no or few herbicides and pesticides, and stores carbon. “Ecologically based agriculture is very significant in taking carbon out of the atmosphere,” says Flora.

Permaculture also has an ethical component. “It’s do no harm,” Flora says. “Care for the earth, care for people, and fair-share the surplus. It’s about consuming what you need but not over consuming. It’s about sharing resources, not just sharing within this generation, but sharing between generations.”