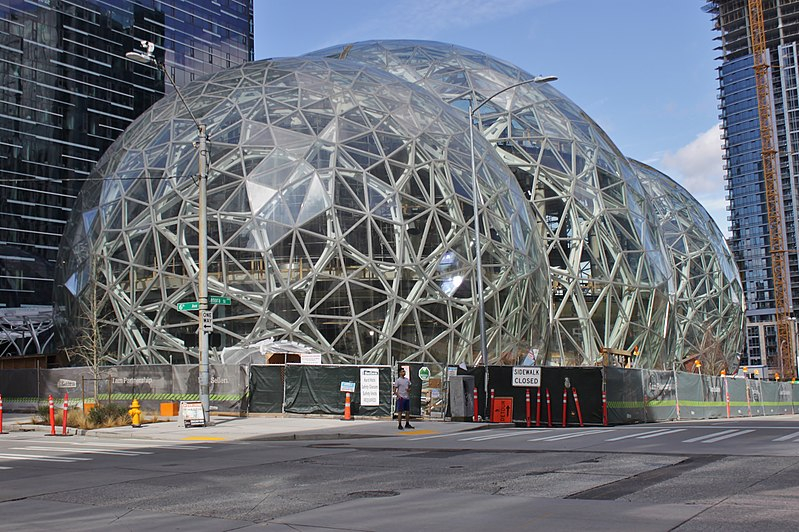 The Amazon Spheres, a tourist attraction on the Amazon headquarters campus in Seattle, seen under construction in March 2017. Author/SounderBruce [CC BY-SA 4.0]
Previous story
Next story

Over the past year, tech workers across the country have walked out to protest a wide range of issues. Google employees objected to the handling of sexual harassment claims. Riot Games workers demonstrated against forced arbitration. And WayFair staff left their desks after learning that the retailer profited from migrant detention centers run by US Immigrations and Customs Enforcement. Now it's Amazon's turn.

Over 900 Amazon employees have signed an internal petition pledging to walk out over their employer’s lack of action on climate change. The demonstration, scheduled to start at 11:30 am Pacific time on September 20, will mark the first time in Amazon’s 25-year history that workers at its Seattle headquarters have walked off the job, though many are taking paid vacation to do so. Most of the workers who have signed on so far work in Seattle, but employees in other offices, including in Europe, have indicated an interest in the event as well. The protest is part of a global general strike led by 16-year-old climate change activist Greta Thunberg taking place ahead of the United Nations Climate Action Summit on September 23.

WIRED spoke with three Amazon employees who signed the petition and plan to join the walkout. “It’s incredibly important that we show up and support the youth who are organizing this kind of thing, because I think it’s really important to show them, hey, you have allies in tech,” says Weston Fribley, a software engineer who has worked at Amazon for over four years.

"I have a chance here to influence Amazon to become a climate leader, and I think that’s the biggest impact that I personally can bring to the fight," says Maren Costa, a principal UX designer who has worked at Amazon for over 15 years.

In the petition, Amazon Employees for Climate Justice—the group of workers organizing the walkout—outlined three specific demands for the company and its CEO, Jeff Bezos. They want Amazon to stop donating to politicians and lobbying groups that deny the reality of climate change, to stop working with oil and gas companies to optimize fossil fuel extraction, and to achieve zero carbon emissions by 2030.

"There's so many tools and capabilities within Amazon that it can really be a leader in this."

The workers aren’t merely calling on Amazon to offset the impact of the greenhouse gases it emits into the environment; they want it to stop using fossil fuels entirely. Converting fully to renewable energy is an ambitious goal, especially for a logistics company that relies on gas-guzzling cargo planes and trucks to deliver goods to consumers’ doors in two days or less. But the employees joining the walkout say Amazon is the most ambitious company on the planet, and leading scientists have made it clear for years that drastic action is necessary to halt the climate crisis.

"There's so many tools and capabilities within Amazon that it can really be a leader in this," says Danilo Quilaton, who has worked at Amazon for over two years as a product designer at Twitch. "That's all I want as an employee of Amazon—to work for a company that's taking climate change seriously and leading the push forward."

The protestors' two other demands were informed, in part, by news reports published over the past several months. In April, Gizmodo reported that Amazon Web Services, the company’s cloud-computing division, has aggressively courted the business of oil, gas, and coal companies. In March, Andrew Jassy, the CEO of AWS, even spoke at a fossil fuels conference in Houston, where he stressed Amazon’s close relationship with the industry. The workers who plan to walk out want AWS to no longer sign “custom contracts” to help “fossil fuel companies to accelerate oil and gas extraction,” according to their internal petition.

“I think it’s totally legitimate to say this is a really harmful industry," Fribley says. "It’s accelerating climate change, it pollutes environments and communities in all these different ways, and it’s really dangerous—and we’re not going to do business with it.”

And in July, The New York Times reported that Amazon had paid $15,000 to sponsor an event organized by the Competitive Enterprise Institute, a libertarian think tank notorious for its attempts to sow public doubt about the scientific consensus on climate change for decades. In a Medium post published in July, Amazon Employees for Climate Justice said they were “heartbroken and angry” about the sponsorship and noted that Amazon had also donated to 68 members of Congress in 2018 who consistently voted against climate change legislation. Now, the workers want Amazon to stop funding groups like CEI, as well as politicians who deny the harmful impacts of a warming planet.

Amazon has previously set ambitious environmental goals but has yet to attain them. In 2014—just months after Greenpeace published a damning report on the company's energy usage—Amazon pledged to run 100 percent of AWS on renewable energy sometime in the future. It’s so far only met half of its stated goal. Both Google and Apple already power their operations with 100 percent clean energy, and Facebook says it is not far behind.

Earlier this year, members of Amazon Employees for Climate Justice met with company leadership to discuss the retail giant's plans to combat the climate crisis. Fribley says that, during the meeting, he was surprised to learn that Amazon appeared to have few specific environmental objectives. “I think everybody at Amazon knows that’s not how you get stuff done," he says. "That was kind of eye-opening—to hear that there weren’t goals around reducing the amount of carbon Amazon emits.”

Unlike more than 7,000 corporations around the world, Amazon doesn’t report on its environmental impact to CDP, a UK-based nonprofit formerly known as the Carbon Disclosure Project. This year, the retail giant said it would finally begin tracking its carbon footprint, but it’s developing its own secretive approach. Corporations that disclose data to CDP do so in a standardized way, whereas Amazon is developing its own methodology.

In an emailed statement, an Amazon spokesperson did not address the walkout directly. "Playing a significant role in helping to reduce the sources of human-induced climate change is an important commitment for Amazon," the statement reads, in part. "We have dedicated sustainability teams who have been working for years on initiatives to reduce our environmental impact."

Amazon has announced several new sustainability initiatives in recent months, including Shipment Zero, a goal to have 50 percent of all deliveries reach net carbon zero by 2030. Shortly after the Gizmodo investigation was published, Amazon also announced it would build three new wind farms, its first renewable energy projects in more than two years.

The planned walkout isn’t the first action Amazon Employees for Climate Justice have taken. Last year, a group of several dozen former and current employees, who were given company stock as part of their compensation packages, jointly filed a shareholder resolution that would have forced Amazon to issue a report on how it planned to grapple with climate change.

As the resolution began gaining support internally, Amazon publicly announced Shipment Zero. The next day, Mark Hoffman, a top lawyer at Amazon, asked the workers whether they would now consider withdrawing it. But they decided the goal wasn’t good enough. Instead of taking back their resolution, the employees published a public letter asking Bezos and Amazon’s board of directors to adopt it. Over 8,000 employees publicly signed their names. Though the resolution ultimately didn’t pass, it helped to raise public awareness and build support among employees inside Amazon—and ultimately led to the upcoming walkout.

Amazon employees have walked out previously this year, as part of a broader backlash against working conditions in its sprawling warehouses. In March, Amazon workers at a Minnesota warehouse left their posts—likely the first strike ever at an Amazon facility in the United States. Employees at the same fulfillment center went on strike again during the company's annual Prime Day sale in July. Several weeks later, another group of workers at a nearby delivery center in Minnesota also walked off the job.

The participants hope that if even a fraction of the roughly 45,000 people who work at Amazon's Seattle headquarters join the walkout, the demonstration will force the company to take climate change more seriously. Ultimately, they also hope it will impact more than just their own employer. “If Amazon stepped up to be a leader, imagine how many people would follow,” says Costa. “We have one of the most trusted brands in the world. It would mean so much for our customers, the next generation, and to our peers.”