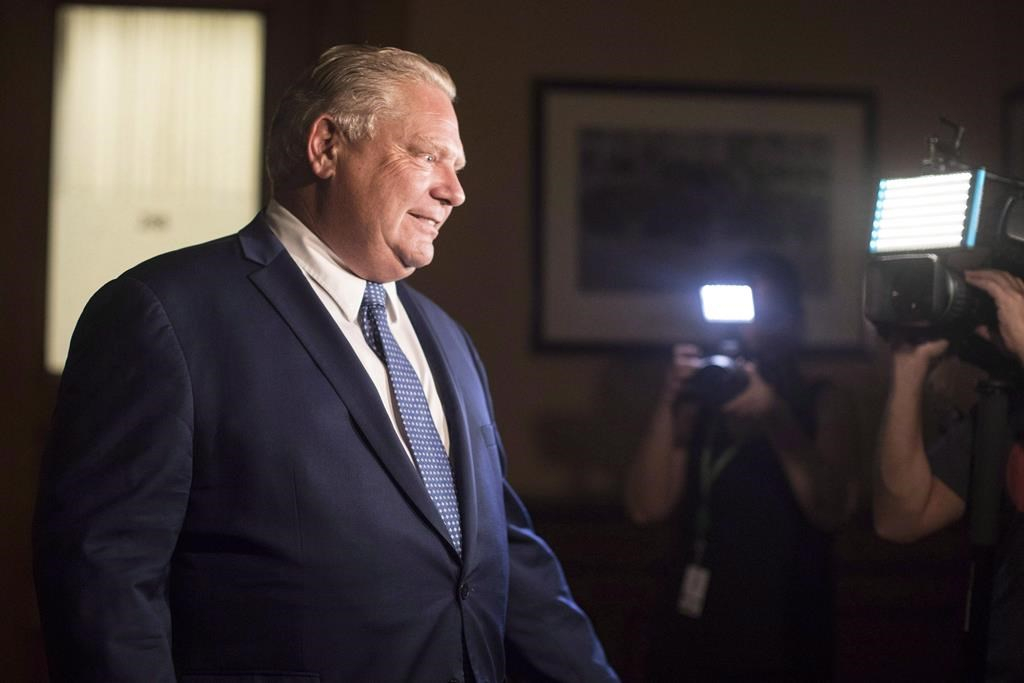 Ontario Premier Doug Ford makes his way to a press scrum before the Ontario Legislature holds a midnight session to debate a bill that would cut the size of Toronto city council, in Toronto, on Sept. 17, 2018. File photo by The Canadian Press/Chris Young
Previous story
Next story

Ontario's top court has upheld a provincial law that slashed the size of Toronto's city council nearly in half last year, saying the unexpected move did not interfere with candidates' or voters' ability to express themselves freely.

In a split decision, the Ontario court of appeal sided Thursday with Premier Doug Ford in his dispute with the City of Toronto, which had challenged his unprecedented intervention in the 2018 municipal election.

The right to free expression does not amount to a right to effective or successful expression, Justice Bradley Miller wrote for the majority of the appeal panel.

"The frustration of candidates in facing altered electoral circumstances — unanticipated rivals, losing allies, and needing to reach new voters — did not prevent them from saying anything they wished to say about matters in issue in the election or in promoting their candidacies," he wrote.

"The submissions of the city and some of the intervenors make the error of implausibly characterizing every negative impact on the candidates as an interference with expression."

Two judges dissented, however, finding the law did in fact interfere with the free-expression rights of candidates and should be struck down. The 3-2 split increases the likelihood the Supreme Court of Canada will have to weigh in on the issue.

The province said it was pleased with the ruling but would not comment further given the possibility of further appeal.

The city, meanwhile, said it would review the decision, but noted councillors had earlier directed staff to seek leave to appeal to the country's highest court if necessary.

At the time, Ford — a former Toronto city councillor and failed mayoral candidate — said the move would improve decision-making and save $25 million. Critics, however, accused him of political interference and flouting democracy.

The city turned to the court for relief, and a lower court found the law unconstitutional, saying it infringed on the free-expression rights of candidates by affecting their ability to campaign, and those of voters by denying them the right to cast a ballot that could result in effective representation.

Ford set off another wave of outrage when he threatened to invoke the notwithstanding clause in light of the ruling. The province then won a stay of the ruling pending the outcome of its appeal, and the election went ahead with 25 wards.

The city had asked the appeal court to confirm the lower court's findings but to leave the results of the municipal election as is until the next vote in 2022.

In its ruling Thursday, the appeal court said the lower court had misconstrued the meaning of section 2b of the charter by expanding it "from a guarantee of freedom from government interference with expression to a guarantee that government action would not impact the effectiveness of that expression in achieving its intended purpose."