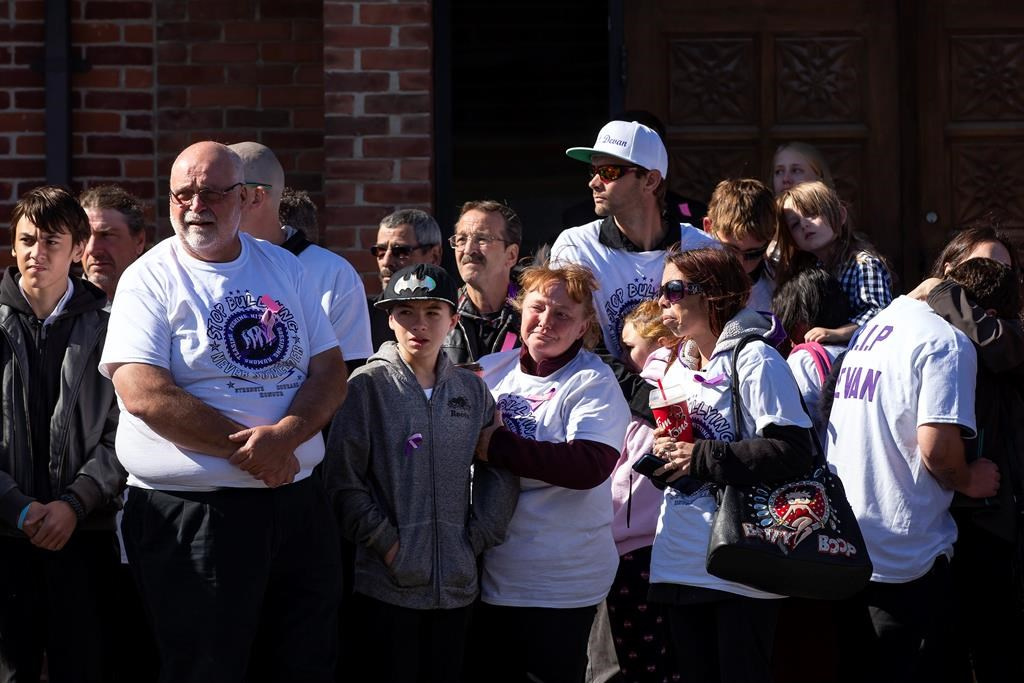 Shari-Ann Bracci-Selvey, the mother of Devan Bracci-Selvey, centre, looks on during a procession following her son's funeral service at Stoney Creek United Church in Hamilton, Ont., on Saturday, October 12, 2019. Photo by The Canadian Press/Tara Walton
Previous story
Next story

Many mourners grew teary-eyed and wore pink in support of anti-bullying campaigns as they gathered Saturday for the funeral of a 14-year-old boy who was stabbed to death outside his school in Hamilton.

Devan Bracci-Selvey was killed on Monday in an attack that unfolded in front of his mother after what his family described as weeks of bullying. An obituary for the boy described him as a loyal friend with a passion for old cars, video games and animals.

Dozens of drivers in classic muscle cars and an anti-bullying motorcycle club came to take part in the funeral procession, donning pink bands on their vehicles in solidarity with bullying victims.

A black hearse also had a pink ribbon tied to it as it carried the boy's casket away.

Craig Mcintyre, a member of the Black Hawks Motorcycle Club, said his anti-bullying group had been asked by the family to lead the procession.

"We're awful saddened by it," he said, offering his support to Devan's mother.

A visitation was also held for Devan on Friday.

Two teens — an 18-year-old man and a 14-year-old boy — have been charged with first-degree murder in the case.

The identity of the adult suspect is protected by a publication ban, while the name of the 14-year-old cannot be released under the terms of the Youth Criminal Justice Act.

While Hamilton police have been relatively quiet about the case, Det.-Sgt. Steve Berez did say they believe the 14-year-old suspect was the one wielding the knife.

He has also alleged there was "some element of pre-planning and premeditation."

Shari-Ann Bracci-Selvey told reporters Wednesday that her son's death came after a month of relentless bullying from fellow students at Sir Winston Churchill Secondary School, alleging Devan was failed by the systems meant to protect him.

The education director of Hamilton-Wentworth District School Board confirmed the school had received complaints about bullying against Devan, but did not provide details.

Manny Figueiredo said the board wil conduct a formal review of its Safe Schools practices when the police and school investigations are complete.

At the funeral Saturday, a mourner whose daughter goes to a nearby school said the incident makes her concerned for her child's safety.

"I'm actually scared to send her to school," said Sherry Albanise, whose 16-year-old daughter went to elementary school with Devan but attended a different high school.

"This should not have happened ... They should have done something but they didn't."

Her daughter, Kelsey Albanise, said Devan was a shy but well-liked kid who loved to wear purple.

"I'm going to remember that he's a loving kid and that he doesn't deserve this," said Kelsey.

She was frustrated with the lack of action in Devan's case, saying that bullying was a big problem at the school.

"They reported it to the school many times and the school didn't do anything," she said.

"They just kept brushing it off like it didn't matter, but it mattered because something happened."