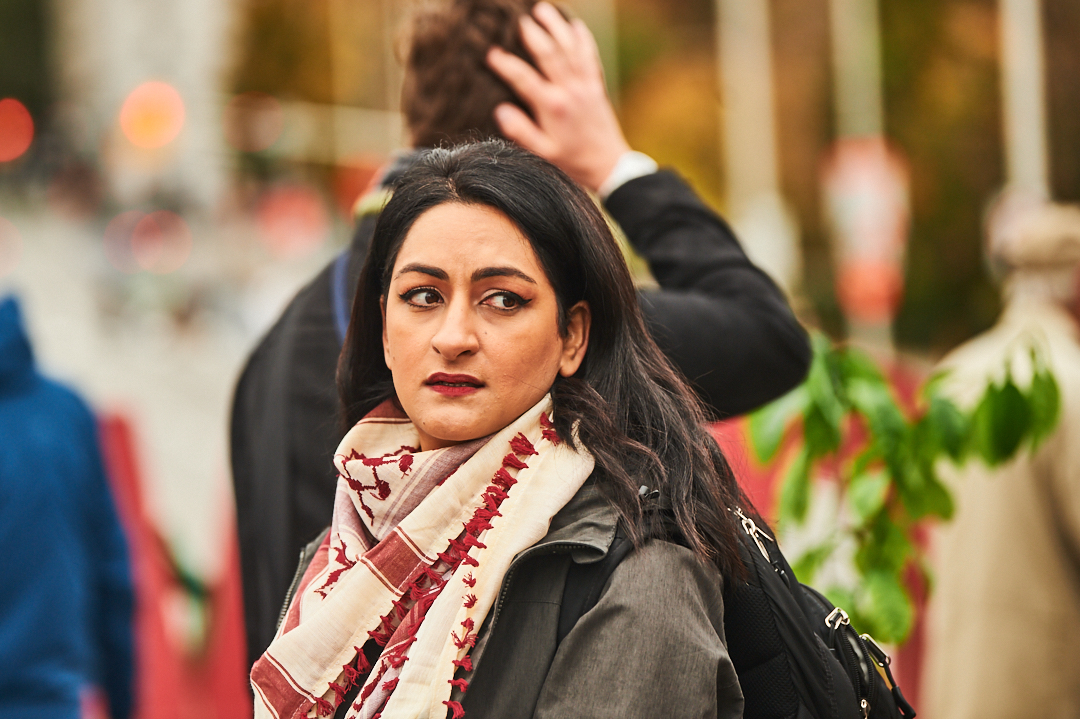 Amani Khalfan, a coordinator for Extinction Rebellion in Ottawa, at a protest on Oct. 18, 2019. Photo by Kamara Morozuk
Previous story
Next story

Amani Khalfan gives a hearty laugh when she's asked what she thinks of Canada’s election results.

As a coordinator for Extinction Rebellion (XR) in Ottawa, Khalfan finds it difficult to see much daylight between the promises made by Canada’s federal political parties — even between those on the left.

“No political parties, even the NDP or Greens, have committed to acting as quickly as needed to reduce global emissions, and (ban) new fossil fuel infrastructure,” she told National Observer.

“We can’t keep fighting individual pipelines or projects. Extinction Rebellion is about system change. Extractive capitalism and colonization got us to where we are, and political processes can’t save us.”

In Ottawa, "political processes" are never far away.

Last week, a freshly re-elected Prime Minister Justin Trudeau said Canadians "sent a clear message" that "affordability and the fight against climate change are really clear priorities that they want this Parliament to work on."

Canada's current carbon pollution reduction target is to cut 30 per cent below 2005 levels by 2030. But in order to meet that commitment, government projections show big national initiatives such as carbon pricing, and regulations on transport fuel and coal power will have to be bolstered with other actions such as increased use of public transit.

None of that is good enough, XR says: they want net-zero emissions by 2025.

The reason, they say, is clear: time is running out for many species on Earth, yet progress on environmental policy has been too incremental. Extinction Rebellion's logo, an hourglass inside a circle, serves as a reminder that the clock is ticking.

A United Nations report this year concluded that over one million plant and animal species are threatened with extinction, "many within decades," and driven in large part by pollution and climate change. Mass extinction of wildlife will threaten humanity's food supplies.

XR wants governments at all levels to tell the truth about the climate crisis and axe legislation that hinders action. And it wants a just transition led by a “people’s assembly” instead of politicians.

Their protests have disrupted events, occupied buildings and shut down parts of cities around the world, using non-violent civil disobedience to grab attention and generate support for tackling carbon pollution in a more serious way.

This month, organizers In Canada blocked traffic in Halifax, Toronto and Edmonton. In Ottawa, on Oct. 18, about 100 people showed up to block a bridge in the downtown core.

Police were present when Khalfan and others closed off the Laurier Bridge with a giant sign that read “Act Now” and a banner that said “Truth demands action.” Ottawa police were aware of the group’s plans beforehand and acted very hands off, Khalfan said.

XR’s demonstrations aren’t always so calm. In London, U.K., protesters identifying with the group clashed with angry commuters two weeks ago after gluing themselves to trains.

Extinction Rebellion is “decentralized and non-hierarchical,” Khalfan explained; it faced overwhelming opposition from within the movement about the London train tactic. She said she personally believed blocking public transit wasn't an ideal move.

Still, the movement has managed to "change public perception and awareness of the climate emergency much faster and to a much greater degree than any organization I’d seen before," she said. 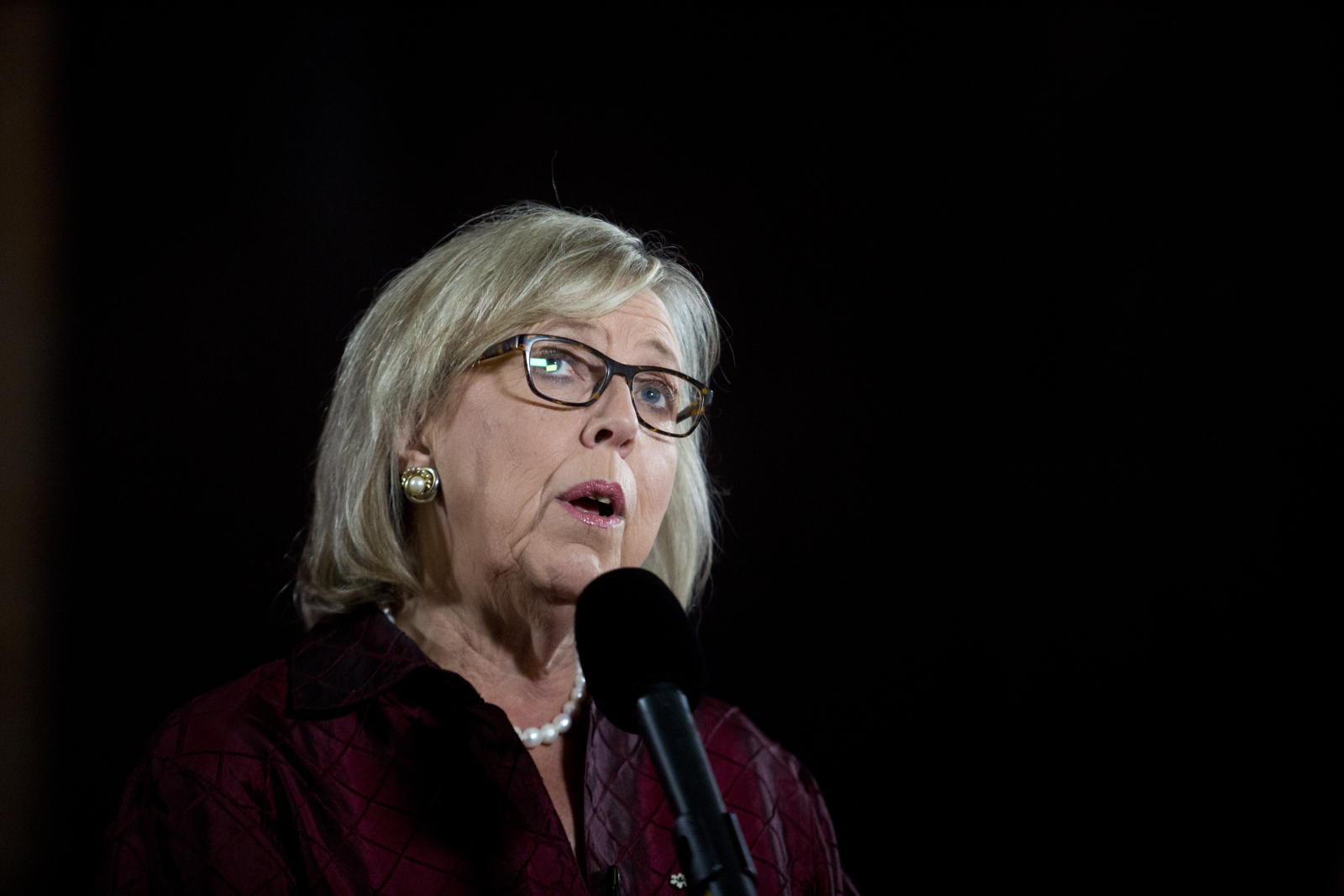 May: 'Critical that Canada assume a leadership role'

The Liberals say they want to do more in Canada. “The planet is burning and people are taking to the streets to demand stronger action to fight climate change...we must step up," Steven Guilbeault, then a Liberal candidate and now an elected MP, was quoted as stating in September.

But the party can no longer pursue any green agenda alone: they will need to partner with at least 13 MPs from other parties to achieve a 170-member majority vote in the House of Commons and pass legislation.

Those 13 votes could come from any combination of elected members from the other parties, including 32 Bloc Québécois, 24 NDP and three Greens.

The Liberals could also try to obtain votes from any of the 121 Conservatives. Michael Chong, for instance, a Tory MP who was re-elected on Monday, has said he agrees there is a climate emergency. (Chong and other Conservatives voted against a motion in the previous session of Parliament to declare that emergency; Chong said it amounted to empty rhetoric.)

Last Thursday, Green Party leader Elizabeth May said none of the three Green MPs would hold any confidence in the government’s grip on power, unless it tightens its carbon pollution targets beyond what was set in 2015.

“To improve humanity’s chances of survival, it is critical that Canada assume a leadership role, first ramping up our own ambition and then pushing for more ambition overall in global negotiations,” May wrote to Trudeau in an open letter.

'People can expect to see much more'

Khalfan said XR does not engage with partisan politics. It just wants governments to take the climate crisis with the urgency it requires.

“We’ve had decades of environmental campaigning, and (yet) things are getting worse. Emissions are still going up. It’s come to a point where we have no choice but to force governments to pay attention and ask people to join us," she said.

The Ottawa group is planning to carry out further events in order to do this.

“I can say that XR is growing pretty quickly in Canada, and that one of the main things about XR’s civil disobedience model is that it’s important to have a lot of people, and to go to the capital city, and to break the law, and to stay there in an occupation for as long as you need,” said Khalfan.

“People can expect to see much more long-term, active sit-ins and takeovers of important political and business districts next year.”

A lot can be done in 5 years, but I doubt that net-zero is attainable by then.
Perhaps National Observer might make it clear how this might happen without freezing people to death anywhere much north of Toronto.
I lived through a 15-day electricity knock-out in Toronto, around Christmastime a few years ago. The indoor temperature here, was several degrees below zero. I lived in snow pants and parka, kept the water tap dripping, and because I had a very old-fashioned gas hot water heater, was able to run a bath or shower occasionally to keep myself warm enough to stave off frostbite.
Our weather is very much warmer than most of our northern areas get in winter.
I once spent 7 hours out at the intersection of highways, hitch-hiking home for Christmas back in 1972, the night that began a two-week cold snap where temps didn't rise over -30F.
I'd have overnighted in a laundromat in town, had I known the highway no longer passed through town (Prince George).
I was very warmly dressed; had I not been thoroughly coached as a youngster in keeping moving, stamping feet, staying awake, etc., at the very least I'd have lost toes. The northbound bread delivery truck driver rescued me around 5 AM, and coached me through warming my feet slowly. He probably saved my life.
There is need to be practical; I don't believe practicalities demand ANY new pipelines, but a lot would be done by determining just how much oil we actually need in transition, and beginning a legislated shut-down of existing production.
I haven't been able to find any researched "plan" that will get us there under 2 degrees, even -- which by now we all know more than doubles in the far north.

If there are calculations and a plan available anywhere, perhaps this publication could pro-actively publish such.

And new building on TMX in BC continues apace, despite ongoing lawsuits that should, in a just system, hold up the whole thing.

well expressed. I think the

well expressed. I think the key point you made was this. "I don't believe practicalities demand ANY new pipelines, but a lot would be done by determining just how much oil we actually need in transition, and beginning a legislated shut-down of existing production."
A clearly laid-out transition process is vital. Many naysayers seem to feel that action on climate change will in itself be catastrophic due to too many changes all at once. Sure changes will have to be radical, but can be phased in .But we have to start NOW. The court challenge brought in by a group of young people demanding a clear action plan is a good start, but we all have to pressure government to clearly delineate targets for 2025, and each 5 years, and a clear transition plan to phase in new energy sources and industries as we phase out the old

It is like our collective house — the climate — is on fire. Some people will say it isn't. Some people will say, "The fire's not big enough to worry about." Some will say "Let's use a squirt gun to put out the fire." A very few will say, "This is a major problem; we need to do something big, and do it now."
The problem is that, while some/many people realize there is a challenge, they just don't want to pay for change. So nothing significant will be done. Nothing significant can be done, unless we all are prepared to pay more.