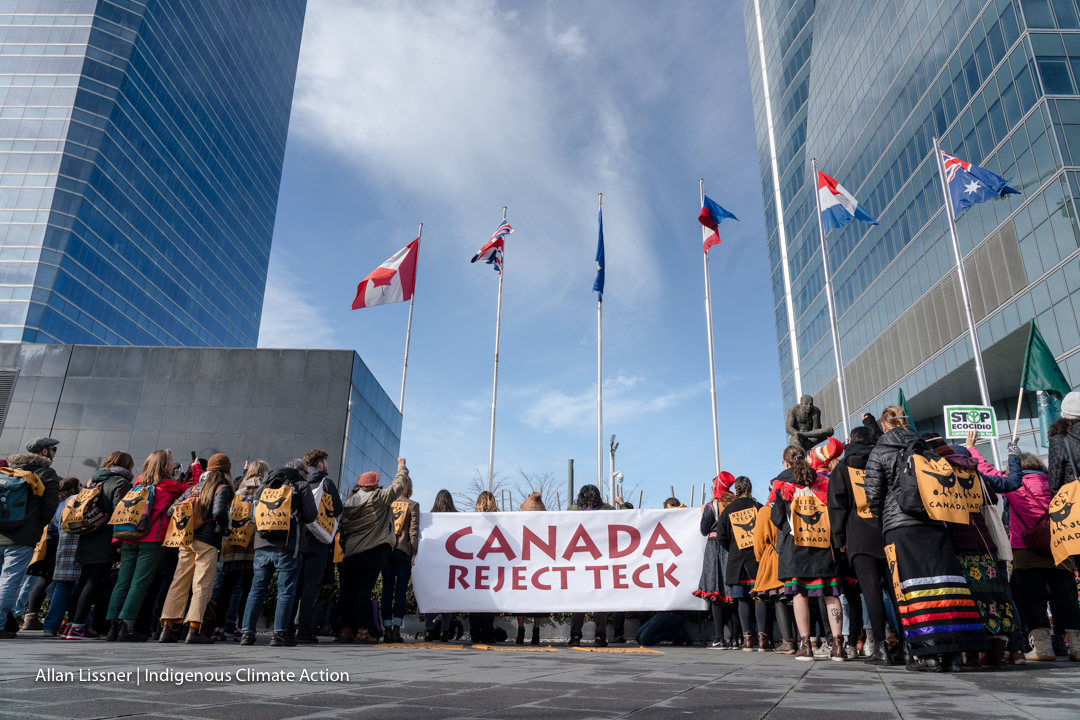 Pity the poor staffers assigned to Canada’s negotiating team at COP25, they must be suffering whiplash.

Walk the halls of this sputtering summit and you’ll find UN delegates gratefully heralding Canada as a bulwark against the global tide of authoritarians and extraction populists ignoring climate calamity. You’ll run into climate advocates praising Canada’s pledge to go zero carbon. But step into a side conference and you’ll find a panel of carbon experts PowerPointing the pollution impacts of Canada's rapidly expanding oil and gas industry. They’ve ranked Canada 55th out of the 61 biggest countries in the world, rating our performance “very low.”

Need some fresh air? Outside, activists from every corner of the world are protesting Teck Resources’ proposed mega-mine in the Alberta oilsands which the feds need to nix or approve in the next couple months. Canada's delegates would probably rather stick near the negotiating rooms where observers praise them for pushing stronger international climate rules. Or maybe head over to the finance panel where the United Nations rep is showcasing Canada’s Just Transition strategy for coal workers as a model for the world to follow.

After a miserable day mired in the inanities of United Nations procedures, you might want to head over to the Canadian embassy for a quiet drink. But it might not be so quiet because there you will find Indigenous youth who have occupied the reception area in protest, calling out the government for authorizing pipelines despite First Nations opposition, and approving mega projects which threaten their homes and future.

Canada’s experience at the Madrid COP is a bit of a microcosm of the country’s predicament. Canadians overwhelmingly want more ambitious action against climate change. Two-thirds of voters made that clear in the last election.

The federal government has brought in a package of climate legislation better than most in the world. Our electricity is among the greenest anywhere and is moving towards zero carbon. Provinces with good EV programs are selling electric cars as fast as dealers can get them on the lots.

In fact, 85% of the country is pretty much on track to meet the climate targets Canada pledged to the international community.

And yet, despite our tiny percentage of the world population, Canada is the ninth largest climate polluter in the world. The main reason is that we’re a top-five producer of oil and gas. Back when most of us hadn't realized the climatic dangers of burning fossil fuels, we built an industry that is a true wonder of engineering and technology.

We should have recognized, even then, that the foundation of this engineering marvel was crushing human rights while poisoning, fragmenting and, in many cases, obliterating the land and territories of Indigenous people.

But most Canadians benefited greatly from the wealth generated by the fossil fuel boom. What’s different today is that we are belatedly reckoning with the brutalities of colonialism. And now we do know — we know the climate impacts of burning oil, gas and coal. But we are only just beginning to reckon with these fossil fuel impacts. We are phasing out coal use domestically. But with oil and gas, we are doing exactly the opposite — we are doubling down, massively expanding the industry year after year. Fossil fuel production has levelled off in most countries, but it is still growing globally. About 85 per cent of that global expansion of new oil and gas projects is happening in the U.S. and Canada.

Countries are planning extract 120% more fossils by 2030 than can be burned to keep the #climatecrisis below 1.5°C, the @UNEP report shows. This difference between the least harmful and a dangerous level of fossil fuel supply is called the Production Gap. https://t.co/TCgNEpibOB pic.twitter.com/qSEbLeGp9p

That’s why the Trudeau government is taking heat from critics young and old. Greta Thunberg led a group of international youth calling out Canada at the beginning of the week. Making the case that continued fossil expansion amounts to abuse of the rights of children, the group called on Canada to "end the development and export of new oil and gas reserves, and set a plan to quickly phase out existing production fields.” Canada "must stop prioritizing short-term economic gains over the future of its children and all children around the world,” the group said.

Bookending the week, Jeffrey Sachs, presiding elder in the field of economic development and the fight against poverty, took to the stage to castigate Canada, and Justin Trudeau specifically: “It doesn’t work to try to have it like Canada’s Prime Minister Trudeau — to say 'we will be clean at home but export our crud around the world.'"

Sachs was being generous. Canadians might want to be clean at home, and we do now have real climate policies coming into force, but we still drive the dirtiest vehicles of any country on the planet, and we are still approving massive new fossil projects for LNG and oil. The feds have a moment of truth coming soon after they return home from Madrid — they’ve got to decide whether to allow the largest oilsands mine ever to go ahead right near the edge of Wood Buffalo National Park.

Teck Resources' mega-mine would be “an example of moving the line in the wrong direction,” says Eriel Tchekwie Deranger, a Dënesųłiné woman and member of the Athabasca Chipewyan First Nation. “Both on climate and addressing the legacy of colonial extractivism on Indigenous lands and territories… It’s time for the government to take a stand on Indigenous rights and a climate-stable future.”

As COP25 came to an ignoble end, one country gave a glimpse of the Canada we could aim to be. Norway, another northern oil and gas producer, stood up alongside island nations facing imminent inundation and angry at the lack of commitment by big polluters.

Norway’s government made the kind of commitment Canadians voted to get from Ottawa: “We have to cut 55 per cent by 2030 and to zero by 2050,” Norway pledged. "As an oil producer we need to prepare for that change. We have to diversify our economy just like every other country. And stop all fossil fuel use in the future."

Good article Chris Hatch, thank you, will share with my networks.

Thank you for sharing, Sharon

Thank you for sharing, Sharon.

First of all; many excellent points! Thanks for a thoughtful and thought-provoking piece.
However… Those UN delegates you purport (not report… that would require at least a quote) to hold that Canada is somehow providing "...a bulwark against the global tide of authoritarians and extraction populists" (presumably Donald Trump, Jair Bolsonaro, Rodrigo Duterte, Jeanine Áñez Chávez, Maxime Bernier, Doug Ford, Jason Kenney, Boris Johnston, Marion Le Pen, etc, etc., etc.) are mistaken. Canada’s and others’ so-called “centrist” positions on extraction is largely rhetorical and virtually indistinguishable in any deep or substantive way, from that of these right wingers, a paradox you duly note; “....the country is pretty much on track to meet the climate targets Canada pledged to the international community… And yet, despite our tiny percentage of the world population, Canada is the ninth largest climate polluter in the world.”

Anyway, that’s the message (e.g. largely rhetorical and virtually indistinguishable...) we’re getting from the protesters at COP25 and in cities around the globe, most of whom aren’t funded by big petro, big money, big anything! These messengers seems to many of us out here to have less complicated, less conflicted, less self-interested, more credible motives. Indeed there may even be a growing consensus of opinion that “bulwarks” such as Trudeau gov’t serve, as often as not, as enablers of the right. (Think Hillary “beating” Bernie in 2016 primaries, resulting in Trump. Or more recently the mistrust of Labour in Britain, in no small part a hangover of the Tony Blair, Gordon Brown, et al, “New Labour” cynicism resulting in the catastrtophic Tory landslide this week.) Notwithstanding fondly nostalgic hopes for a king-making NDP proding Justin and Bill Morneau toward progressive policies as in the Pearson and Trudeau were gov’ts of yore, it’s at least as likely that the initial working coalition for our hung Parliament will be with the Tories, once Scheer is replaced; perhaps before. Some bulwark.

Also; the story’s bald assertion; “...most Canadians benefited greatly from the wealth generated by the fossil fuel boom.” Evidence? Depending on what is meant by “benefited” this is pretty questionable. According to a research group at a major university in my community studying the overall “wellbeing” of Canadians, this is not reflected in the facts. Quite the contrary. Goto . Unless you mean that Canadians would be even worse off without the extractive fossil fuel industry. Maybe. Again though, please provide evidence, or at least argument.

Finally, there was a time when young reporters were more apt to examine the credentials of people like Jeffrey Sachs, "presiding elder in the field of economic development and the fight against poverty…”. Please be aware that there were many respectable eyewitnesses who documented his role in the plundering of the post-Soviet Russian economy to the benefit of the famously kleptocratic oligarchy long since institutionalized in Putin’s Neo-Czarist state. (Goto .) If Jeff was indeed involved in “a fight against poverty” during his sojourns in Moscow, he won spectacularly in the case of a very few individuals!, but lost overwhelmingly in the case of dozens of millions of ordinary Russians. Poverty spiked. Birth rates tanked. Death rates spiked. Handsome Harvard guys like Jeff barely got got their suits rumpled. Plenty of other World Bank and IMF "Washington Consensus" shenanigans. How journalists can quote guys like him without blushing is beyond my limited understanding of the inner workings of media. (Who knows?! Maybe you are blushing?)

Aha! You can't post links. For my first "Goto" search University of Waterloo Wellbeing or some such thing. There's a PDF report from 2016.
For my second Goto check out the Atlantic Magazine archives from 1998. Something about Harvard Boys.

Sorry again. Not The Atlantic

Sorry again. Not The Atlantic. The Nation. "Harvard Boys Do Russia"