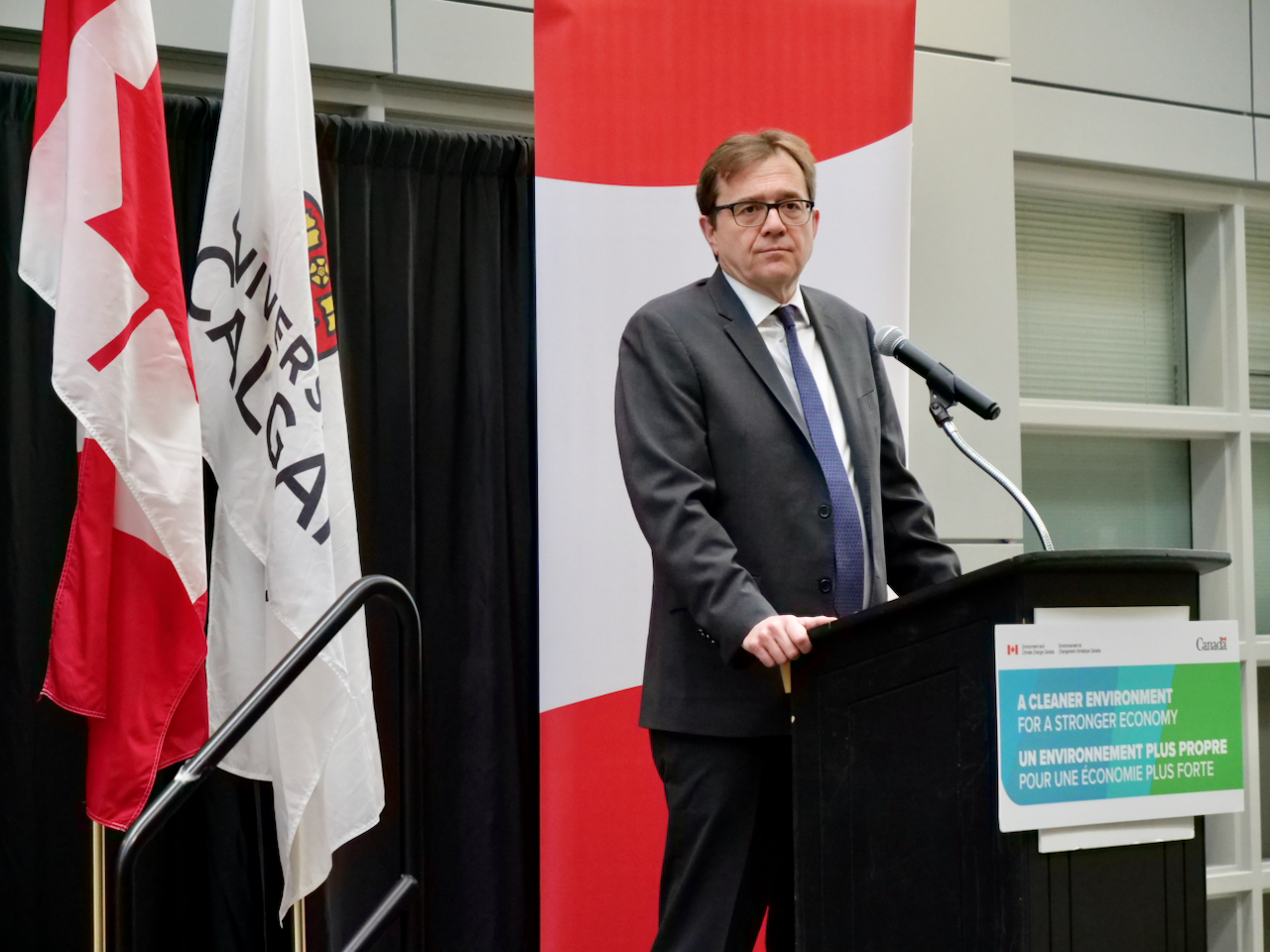 Federal Environment and Climate Change Minister Jonathan Wilkinson was in Calgary on Tuesday for a funding announcement. Photo by Sarah Lawrynuik
Previous story
Next story

Canada's environment and climate change minister, Jonathan Wilkinson, is in Alberta this week meeting with academics and energy-industry experts looking at how Canada can continue energy extraction while also meeting its new goal to be a net-zero emitter by 2050.

"My background is clean tech. I'm very interested in the discussions around how technology can enable us not simply to address emissions-intensity-related issues, but to help us think about how we might extract energy without pollution," Wilkinson said at a press conference in Calgary on Tuesday.

"Pathways to doing that, I think, are enormously important in the context of the conversation we will be having going forward. And that's part of what I'm going to be talking to folks about today."

The minister held the press conference after a funding announcement for an energy-savings project at the University of Calgary.

Conversations about how Canada's net-zero goal will mesh with continued energy development in the country's oil and gas heartland are centre stage as a new oilsands megaproject awaits approval from Ottawa.

Teck Resources' application to start work on their Frontier oilsands mine will be approved or rejected by the end of February. Alberta’s environment minister, Jason Nixon, has asked Wilkinson to expedite that process. However, Frontier will force the federal Liberals to make their first divisive climate change call of this term.

Teck has committed to the Frontier mine being one of the lowest-emissions-intensity oilsands projects if approved. But it is a long way from carbon neutral, as it is expected to emit roughly six megatonnes of CO2 equivalent annually, according to the Pembina Institute.

"That is something that we will have to be discussing and wrestling with as we make a decision one way or the other. I've had that conversation with Minister Nixon. He's quite well aware of that. And I think given the commitment to 2050, that's something that everybody is aware of," Wilkinson said.

Oilsands emissions are only projected to increase out to 2050 growing from roughly 70 megatonnes per year.

Emissions from Canada's oil and gas sector have increased by 84 per cent between 1990 and 2017 to 195 megatonnes of CO2 equivalent. Oil and gas production represents 27 per cent of Canada's overall emissions, according to Natural Resources Canada.

Minister Wilkinson needs just to do the math. The IPCC informs us that to have a chance of forestalling accelerating devastation of our shared environment, by heating our global average temperature more than 1.5 degrees C, we need to bring emissions down in excess of 7% per year for the next decade. We will have an easier time doing that, and affording doing that, if we don't start by green-lighting another climate burdening high-emissions fossil fuel mining project.

If he approves the Teck project, whose emissions impacts are likely underestimated (as with all such projects, seemingly), he is putting a demand on every citizen in the nation that WE do the work and take on the cost to reduce our emissions, that the government of Canada and Teck are not willing to do. I'm not sure how many citizens that would mean need to pay for an EV, give up driving, install solar panels, stop eating meat, etc, but I would bet it is a lot of us. Perhaps Barry Saxifrage could do the math for us, as it would make for an interesting article and viewpoint.

No new fossil fuel projects should be approved, very obviously, as we have the technology to now move away from fossil fuels for many purposes, most that involve burning these fuels, and what's more, we have the global urgent need to do so, preferably starting decades ago. There isn't any logic whatsoever that could justify making it harder for us all to prevent our planet becoming unliveable for ourselves, and our children and grandchildren. Is Mr. Wilkinson willing to sell off his kids' futures? If not, then he should not approve this project. My children also deserve better of him.