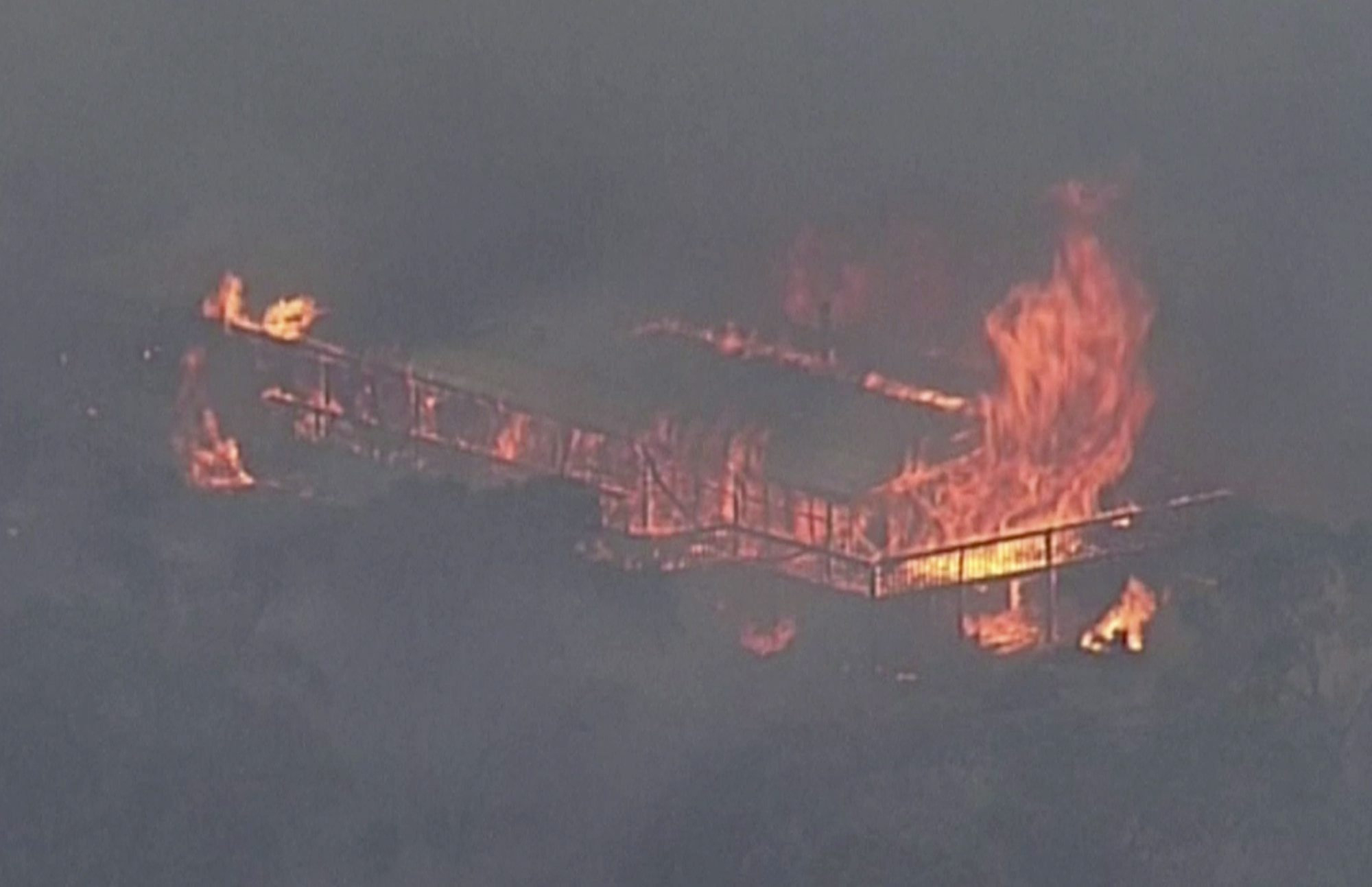 This image made from video shows a house on fire from a bushfire, Monday, Dec. 23, 2019, in Gumeracha, South Australia. Australia’s embattled prime minister has defended his government’s climate policy. (Australian Broadcast Corporation via AP)
Previous story
Next story

"I could have never — 25 years ago, when I started — I could just never have imagined the success of the climate change denial campaign," he said.

The Oklahoma State University professor is considered one of the founders of environmental sociology, and has spent decades studying public opinion on environmental issues and the politics of climate change.

But in recent months, the sophistication and successes of organized climate change denial has particularly resonated, as massive bushfires continue to rage across Australia amid severe drought and record high temperatures, and as the political debate around their causes has led to the repetition of longstanding false tropes.

In politics, that has included the downplaying of the seriousness of climate and emissions issues by key government leaders. Australia's Prime Minister Scott Morrison, for example, has been criticized for his assertion that greenhouse gas emissions from the country, which a recent UN report forecasted will be the sixth largest fossil fuel producer by 2030, have no links whatsoever to the ongoing bushfires.

Morrison's deputy prime minister, meanwhile, called environmentalists "inner-city raving lunatics" for linking emissions to the fires. While no single event can be entirely linked to climate change, most scientists hold that the increase in extreme weather events such as the bushfires can be at least partly attributed to its impacts.

"When [George W.] Bush came into office in the United States and was definitely set against signing the Kyoto Accord and taking any action on climate change, the U.S. administration recognized that [former Prime Minister] John Howard in Australia would probably be a good colleague, he would be someone who could join in and that they could oppose international climate change organization together," he explained. "And some of the American think tanks that had been leading exponents of climate change denial, with a group of contrarian scientists, they actually sent envoys to Australia and to critical conservative think tanks there like Institute of Public Affairs, which really started promoting climate change skepticism and denial in Australia."

Dunlap noted that climate change denialism emerged principally in the United States, as corporate donors from the fossil fuel sector asserted themselves, notably within the U.S. Republican Party, and then spread to other jurisdictions. This was supported, he said, by the emergence of a "conservative echo chamber," including Newscorp CEO Rupert Murdoch’s publications and Fox News television network. Multiple researchers have found that climate change denial taking root in politics and media has impeded policy actions from being taken to address the issue.

"Conservatives don’t like government regulations in general, and they realized dealing with global warming had regulatory implications," he said. "The Republican Party shifted over time to the right in the U.S., it gradually embraced climate change denial thanks to contributions from fossil fuel industries, and conservative think tanks were the leading exponents of climate change denial. Basically they infiltrated very effectively the Republican Party in the U.S. and a lot of conservative parties elsewhere, they were clearly helped by conservative media."

This, he noted, has made climate change denialism a sort of predecessor to the era of social media misinformation, which has emerged in the last decade.

"The climate change denial campaign is a key contributor to what we now call the ‘post truth society'," he said. "There were a lot of other factors going on, but this is one of the areas that pioneered ‘alternative facts’ and what is essentially an alternative reality. The populist element of this seems to be really strong anti-intellectualism, anti-science and those are hallmarks of conservative reactionary politics that we see today."

In recent months, posts on Twitter and Facebook have proffered extreme assertions, accusing environmentalists of starting the bushfires to increase fear around climate change. Users of the website 4Chan, which has frequently played host to alt-right conspiracies, have falsely claimed Australian Muslims started the bushfires at the order of the Islamic State.

National Party of Australia MP Barnaby Joyce baselessly alleged that Green policies have handicapped hazard reduction activities throughout Australia. But former New South Wales fire and rescue commissioner Greg Mullins wrote that it was the hotter and drier conditions that prevented agencies from doing their work, adding that “blaming ‘greenies’ for stopping these important measures is a familiar, populist, but basically untrue claim.”

“I think we're seeing that right now in Australia that there are elements of the political right that are deeply wedded to the fossil fuel economy that are willing to go to elaborate lengths in order to deny the existence of a climate signature on the crisis the country is facing," said Matto Mildenberger, a professor of political science at the University of California, Santa Barbara who studies the relationship between politics and global climate change. ​​​"And that has most disturbingly been expressed recently in this idea that the environmental community is to blame for what's going on. That's very similar to rhetoric that you saw during the Amazon fires last year from Brazilian President [Jair] Bolsonaro Bay, who claimed that US environmentalists are responsible for burning the country down."

Mildenberger said there has been similar rhetoric in Canada and the United States associated with wildfires, where forest benefit practices have been rhetorically linked to environmental groups and blamed essentially for consequences of climate change.

“I've been actually quite disturbed to see how in the Canadian right people very embedded within the fossil fuel economy and in Alberta have been trumpeting Australia talking points to try and dismiss climate change,” he added. “It strikes me as very sobering that, even at this moment of substantial and direct experience of crisis so much effort is being put in to denying the problem.”

However, Mildenberger noted that there are signs of hope.

For example, Morrison’s governing Liberal Party, as well as the political left in Australia, have both had pro-climate politicians alternately obtain and lose the leadership in recent years, suggesting a path forward for policies to address climate change on both sides of the political spectrum.

Mildenberger also said that voters in democratic countries, as climate change becomes a more visible issue through incidents like the bushfires, will necessarily prioritize climate policy more and more.

“But what it does do — and this is really important — is it strengthens the conviction and commitment to climate action among people who are already sensitive to the issue. And we know from public opinion polling that vast majorities of the public in most countries do want to see action on this. I've done a lot of work on Canadian climate opinion and you can see in every riding across the country there is a majority of people who want to see climate action," added Mildenberger.

"And so I think these events, they're not going to change Scott Morrison's mind, or the hearts and minds of these people who have been part of this network denial campaign for decades, but it will elevate the political prioritization of climate change among everyone else and it's going to make climate change a much more salient issue in the Australian elections, in Canadian elections, in the U.S. election because more and more people who believe in climate change are also going to become climate voters, which they haven't necessarily been in the past.”

Wildfires are getting worse, and so is the deadly smoke they bring with them

these wildfires are adding