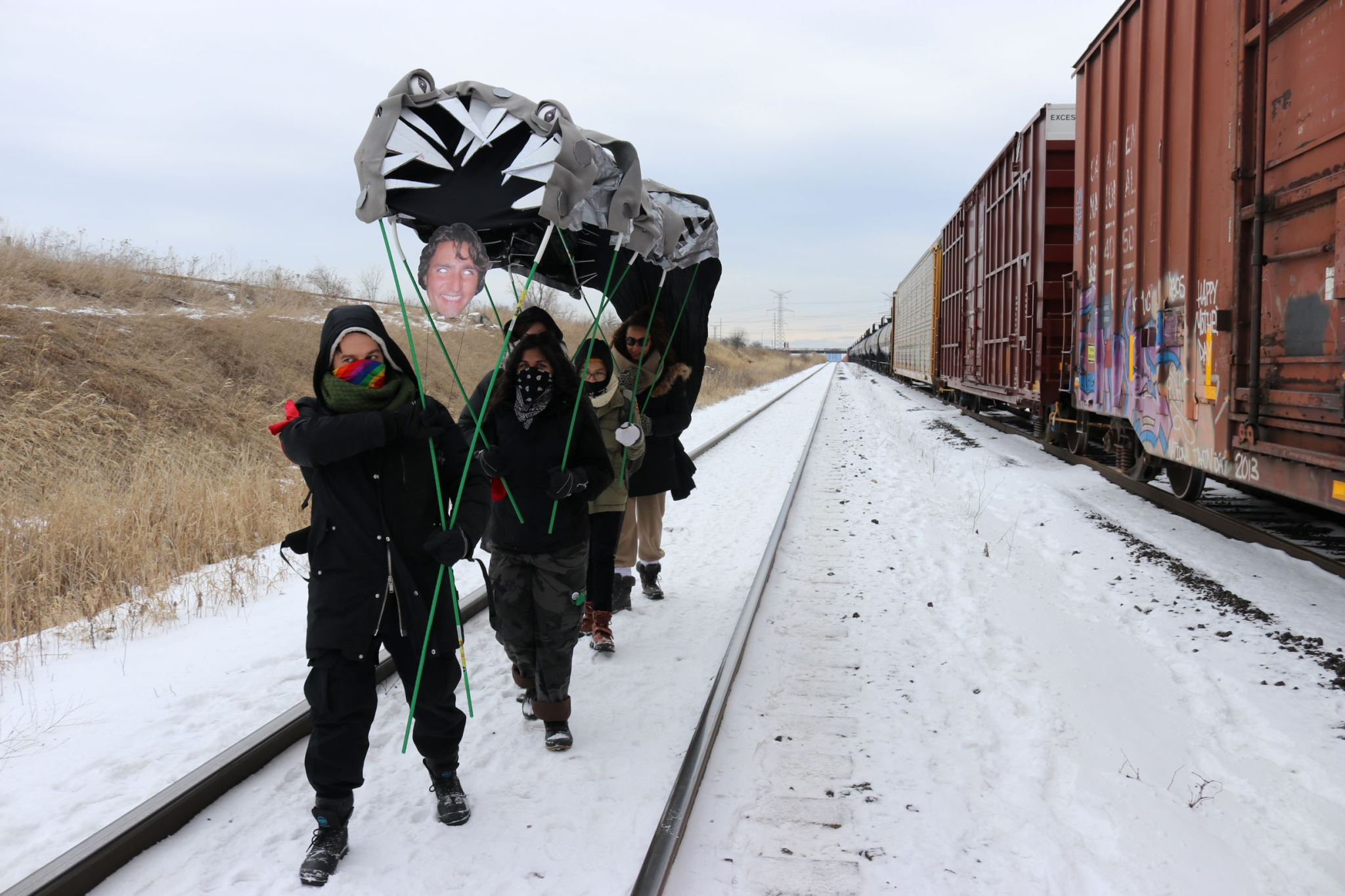 On a normal day, thousands of train cars pass through MacMillan Yard in Vaughan, just north of Toronto. Trains from the north, east and west converge here in one of Canada’s largest rail yards. On Saturday, instead of the rumble of freight cars, the cold air was full of songs, drumbeats, and chants against the RCMP and Prime Minister Justin Trudeau as hundreds gathered to stop the trains for seven hours.

“Our goal is to shut down Canada,” said Vanessa Gray (Anishinaabe). “We don’t want anyone who is facing police violence on their own Indigenous territory to feel alone.” 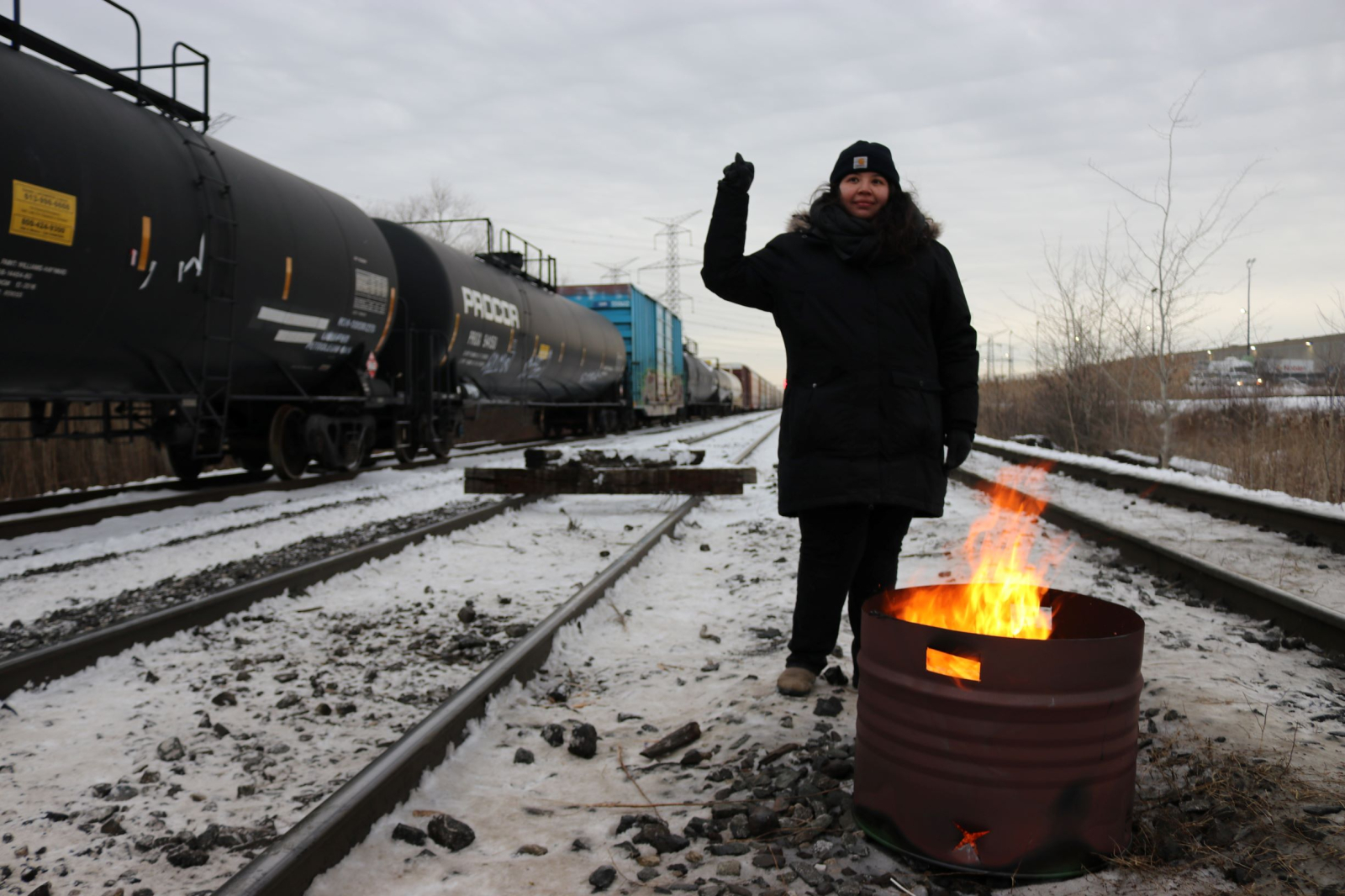 Blockades in support of the Wet’suwet’en pipeline protests have been spreading, bringing trains to a stop across the country and prompting a statement from Trudeau in the House of Commons Tuesday. He dismissed the possibility of arresting protesters and called for patience, saying there is no relationship more important to Canada than the one with Indigenous peoples. Tensions in the House were high and Trudeau had to pause his speech for the Speaker to silence hecklers.

Trudeau's statement comes after a busy weekend in Canada’s largest city, as protesters in Vaughan blocked all westbound CN rail traffic for seven hours. The Toronto protests joined the continued ten-day action of Mohawks of Tyendinaga which has shut down CN’s entire Eastern Canadian network along with a blockade in Vancouver.

When I arrived in Vaughan at 10:15 a.m. on Saturday, Gray was standing with a small group at the far end of a parking lot near the railway tracks. Footprints in the snow led away from the cement and onto CN property. I clambered down an embankment, across a makeshift bridge of planks through a ditch of tall grasses, and up to a CN freight train parked on the tracks just south of the MacMillan Yard. Climbing up and through the gap between two freight cars, I found 70 people standing on the tracks on the other side, blocking the western entrance to the rail yard. A fire was burning under the cold blue sky.

“Our goal is to shut down Canada,” said Vanessa Gray. “We don’t want anyone who is facing police violence on their own Indigenous territory to feel alone.”

The organizing groups of this latest blockade, Rising Tide Toronto and Porcupine Warriors, say they have tackled similar issues closer to home. Gray has organized in her home community of Aamjiwnaang First Nation against the nearby petrochemical megacomplex of Chemical Valley. “We’re all just land defenders,” she said, “trying to work together to make the message as loud as possible.”

A second wave of protesters arrived to a large cheer from the first group, swelling the number of people on the tracks to more than 300. Before long, some of them had also blocked the eastern entrance of the rail yard, a kilometre down the line. The temperature was a few degrees below zero, but winds of over 30 km/h made it bitterly cold. In both encampments, people warmed themselves at fires set between the rail lines or in metal drums.

Natali Euale Montilla, an organizer, said the protesters were blocking railways to affect the economy. She says she wants to stop any supply of materials heading to the Coastal GasLink pipeline. She said the ongoing situation at Wet’suwet’en makes it clear that the Canadian government doesn’t care about Indigenous people: “They talk about truth and reconciliation, but the truth is that reconciliation is dead.” Montilla’s family is Cuica; they are Indigenous to the Andes and emigrated from Venezuela when she was twelve. “As a person who has Indigenous ancestry from a different land,” she said, “I feel really connected to the struggles of Indigenous people in so-called Canada.” She said she finds it nerve-wracking that actions for the protection of the water and the land, intended for the benefit of all people, are policed so heavily.

People were constantly moving between and within the two encampments: tending fires, sharing pizza and hot coffee, stacking branches and rail ties, and dancing. A small group sang songs to the beat of hand drums, sprinkling sacred tobacco and sage on the fire. Cricket Guest (Anishinaabekwe Métis) led the Women’s Warrior Song to honour Indigenous women and girls, including the Wet’suwet’en matriarchs who were recently arrested by the RCMP. Guest said, “If the Canadian government is willing to do this to the Wet’suwet’en people, then they are willing to do it to any First Nations community.”

And, Guest says, they have.

Guest has family in the Algonquins of Pikwakanagan First Nation. Less than two hours’ drive from Ottawa, the community has been under a boil water advisory since 2008. “The reserve that my aunts live in, they don’t have access to clean water,” she said. “Grassy Narrows, Chemical Valley […] We already have seen how the effects of urban development and fossil fuel industries are impacting First Nations communities.” She says she’s tired after spending the last 10 days at blockades and other actions, but glad to see non-Indigenous people joining in. “I’m happy that settlers are supporting us, and using their voices and their bodies as well to show up for Indigenous people.”

In mid-afternoon, York Regional Police served the main group with an injunction. They burned it.

Injunctions allowing police to enforce the removal of protesters were also served in Tyendinaga and Vancouver. So far the Mohawks have ignored theirs. Injunctions are frequently sought and obtained by companies like CN to deal with protesters, but a recent Yellowhead Institute paper found that First Nations who seek injunctions themselves are rarely successful.

As the sunlight faded and the wind picked up, protesters regrouped at the main encampment. An oil pipeline puppet called “Piper”, complete with a mask of Justin Trudeau’s face, was held aloft while the remaining 130 people shouted chants of “When justice fails, block the rails!” and “How do you spell racist? R-C-M-P!”

Jessica Li, who is Métis/Cree, who came from the Windsor area to support the human rights of Indigenous people, said, “Half of our country doesn’t even know what our people have been through. I’m happy to be alive, that my bloodline survived genocide.”

Having stopped the trains for seven hours, protesters decided to leave rather than risk arrest as night fell. By 5:00 p.m, a police helicopter was circling overhead. A drone hovered above the tracks, just out of stone’s throw. York Regional Police vehicles flanked the rail line to the north and south, while a fire engine, a mobile command bus, and two fire vehicles waited farther back. Staff Sgt. Aaron Busby of the York Regional Police, on site since 10:00 a.m, declined to comment on the day’s events, saying a statement would soon be released (as of Monday evening, it has not).

The drummers sang a final song, voices lifting over the sound of wind and helicopter blades. The group departed, leaving fires burning between the rail lines. By sunset, the tracks were empty again.

Indigenous demonstrators break into cheers after a song. Video by Julia Duchesne

Two days later, on Monday, hundreds of people stopped traffic in the heart of Toronto with a march along the city’s main east-west street to the legislature. Justin Trudeau cancelled a planned work trip to the Barbados and met with key ministers about the nationwide blockades, saying he wants a quick and peaceful resolution to the situation.

Tuesday the Prime Minister said finding a solution would take determination, hard work, and cooperation. "We need Canadians to show both resolve and collaboration," he said. "Everyone has a stake in getting this right."

But impassioned words from the Prime Minister might not convince Vanessa Gray.

On a cold Saturday at the side of a blocked railway Vanessa Gray had this to say:

"The federal and provincial government has made it clear that reconciliation is dead by invading the Wet'suwet'en territories. It was never really alive, it’s the same genocidal government as ever before."

I don't know if Canadians, or

I don't know if Canadians, or even the indigenous communities realize just how significant the shut down of Canada's rail lines is. The ambition to "shut down Canada" has shown how easy it is to disrupt the entire Capitalist, exploitative production system that underlies the modern global economic network.

Protest/terrorist groups around the world are no doubt watching this unfold with laser-like attention. Moreover, this economic oligarchic shroud that has grown to enslave and dominate the planet is beginning to fray - around the edges and in the pockets of burning resistance that have erupted throughout its length and breadth.

Globalists have resisted the notion that eruptions of "nativism", of "extreme nationalism" of "religious intolerance and resistance", etc. are the inevitable result of the collective, collusive, corrupt and criminal economic oppression.

Like any species on earth, the reactions to overwhelming existential pressures are twofold - imperative resistance and evolution, or collapse. Either one is inevitably disruptive, possibly fatally destructive to the existing order of oppression.

Canada's indigenous population has, perhaps inadvertently, chosen the rail system as their point of attack. It was the railroad that consolidated the European colonial model and enabled the final domination of North America. It enabled the ultimate fragmentation and genocidal grip on Indigenous lands reducing the remnant populations to degradation and incarceration/starvation on reserves. Shutting down Canada is much easier because of its dependence on the single rail corridor. The US has multiple corridors, much easier to bypass blockades.

I'm surprised that desperate Canadian shippers are not resorting to making use of US rail capacity - but perhaps that is too expensive and one would not be surprised to find US rail corporations willing to goudge Canadians in this crisis.

Governmental reactions are exactly what would be expected. As soon as they feel the economic pinch they are refusing to negotiate and instead send in the unfortunate police/military? strike breakers.

This entire human fiasco is not specifically any one entity's fault. It is the reslt of generations of human, but irrational decisions. If anything it is the evolutionary fault of homo sapiens that it seems incapable of foresight, of decision making that encompasses ALL of the mis-understood/unrecognized factors at play.

We have been willing to sacrifice long term viability for short term gain, a pattern repeated ad nauseum throughout our evolutionary journey. Sometimes human adaptability triumphs, sometime not. There have been multiple dead ends in our evolution. Perhaps we are looking at another?