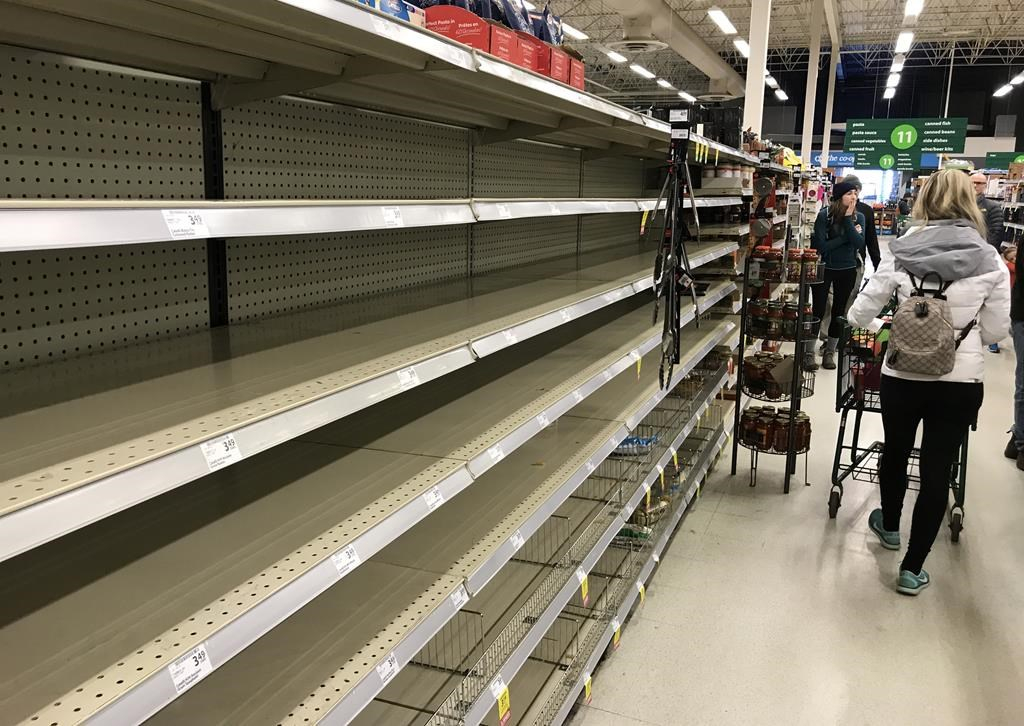 Near empty shelves are pictured at a grocery store in North Vancouver, B.C. on Saturday, March 14, 2020. Photo by The Canadian Press/Jonathan Hayward
Previous story
Next story

Canada's top public health officer raised the risk level associated with the growing COVID-19 pandemic on Sunday even as retailers and top politicians reassured Canadian that any restrictive measures would not result in shortages of food or other basics.

Both the Retail Council of Canada and Prime Minister Justin Trudeau said supplies of groceries and other basics would continue to flow even if the outbreak of the novel coronavirus triggered widespread store or border closures.

"Our window to flatten the curve of the epidemic is narrow," Dr. Theresa Tam said at a news conference. "We all need to act now. COVID-19 is a serious public health threat."

She did clarify, however, that Canadians returning from trips abroad should immediately go into self-isolation for 14 days rather than simply self-monitoring.

Fears associated with the COVID-19 pandemic have triggered a rush on drug and grocery stores across the country as people flocked to buy basics en masse.

While the Retail Council of Canada said the current high demand for food, toilet paper and other staples is understandable as the number of positive cases continues to climb, it urged Canadians not to succumb to panic.

Marc Fortin, president of the council's Quebec chapter, said supply chains continue to function as normal and goods will continue to flow even if major trading partners close their borders in a bid to curb the spread of the virus.

"Groceries and pharmacies are considered essential services, so they will remain open," he said. "We have plenty of food, plenty of goods."

Our window to flatten the COVID-19 curve is narrow, says Dr. Theresa Tam

Fortin said about 70 per cent of commonly purchased items are produced domestically, ensuring their continued availability in Canadian stores. He acknowledged the situation is more precarious for fresh produce and other items being imported into the country at this time of year, but said retailers have suppliers in a variety of countries and have contingency plans in place.

Trudeau also urged retail restraint on Sunday during an television interview with CTV's Question Period conducted outside his home, where he is currently in self-isolation along with his family.

He said Canada's supply chains to date have not been affected by the tightening border restrictions around the world, merchandise is still coming across the border, and there's no need to start hoarding supplies.

"Yes, stock up a little bit so you don't have to go to the store every two or three days like we usually do, but make sure that you're not taking more than you need," he said. "Your neighbours, or vulnerable people, will need to access supplies as well."

Trudeau said a measured approach will be important in all aspects of life as Canadians navigate the outbreak, which has so far infected more than 300 people in the country, and caused one death.

The number of cases continued to climb on Sunday, with Ontario reporting 39 new cases, bringing the total to 142. Health authorities in Quebec reported 11 new cases, prompting Premier Francois Legault to call for the closure of public places in the province such as bars, gyms, libraries and movie theatres.

Legault did not include stores or restaurants in his message, but urged eateries to operate at 50 per cent capacity in order to promote social distancing.

The Manitoba government reported three more cases in that province, bringing the total to seven.

And authorities in Nova Scotia said COVID-19 had officially reached that province after three people tested positive for the virus. Premier Stephen McNeil responded by announcing schools and day-care centres would be closed for two weeks following March break, which is set to begin Monday.

Most people diagnosed with COVID-19 experience mild or moderate symptoms, such as fever and cough, and the vast majority of those who contract the virus recover.

However, for some, including Canadians aged 65 and over, those with compromised immune systems and those with pre-existing conditions, the illness can be much more severe. Among the Canadians diagnosed with the illness so far, fewer than 15 per cent have required hospitalization.

The growing number of cases has prompted widespread closures of schools and universities, mass cancellation of large-scale events, multimillion-dollar economic stimulus packages from governments, and the suspension of the Parliament until April 20

— With files from Stephanie Levitz in Ottawa, Morgan Lowrie in Montreal, Keith Doucette in Halifax