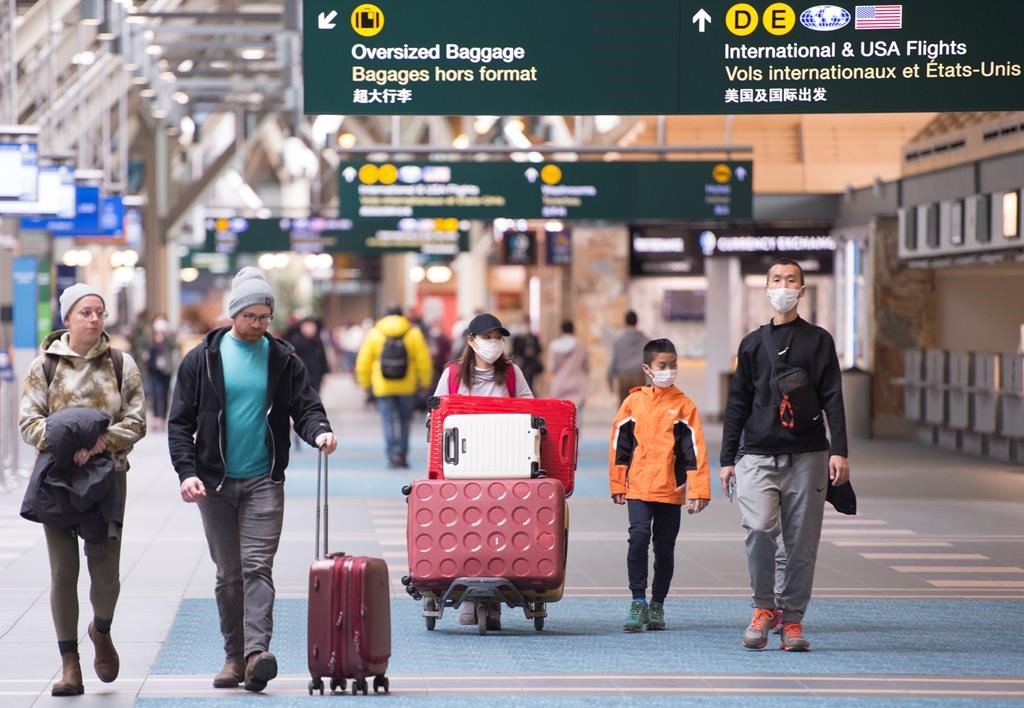 The federal government is restricting international flights to certain airports and boosting efforts to screen passengers for COVID-19 even as some provinces and municipalities start to take matters into their own hands over fears Ottawa isn't doing enough.

The measures announced Monday include redirecting all flights from Europe, Asia, South America and Africa to four Canadian airports after a weekend of disarray that saw many travellers report customs officials were not routinely providing direction to new arrivals.

Yet the government also defended its handling of the COVID-19 crisis, saying it has been adapting its response even as respiratory illness has quickly and dramatically spread around the world since first emerging in China in December.

"This situation, as we all know, has been evolving extremely rapidly," Prime Minister Justin Trudeau said during a news conference outside his home, where he has been self-isolating since his wife Sophie Gregoire Trudeau tested positive for COVID-19 last week.

"We're taking more measures, significant measures, today. I can understand people's frustration, and that's why we're ensuring that there is more that will be done every step of the way to keep Canadians safe."

The new measures will see nearly all international flights into Canada directed to the main airports in Montreal, Toronto, Calgary and Vancouver starting one minute after midnight on Wednesday morning. Flights from the U.S., Mexico and the Caribbean will not be affected.

The government is also closing the border Wednesday to non-Canadians, with some exceptions. Permanent Canadian residents, immediate family members as well as diplomats, aircrew and U.S. citizens will still be allowed into the country.

Airlines are also being told to screen passengers and bar anyone from boarding a flight to Canada if they show symptoms of COVID-19. Aircrew have also been told to notify ground controllers if someone on board a plane displays symptoms and they will be met at the gate by authorities.

And the Canada Border Services Agency has started to increase the number of border agents in airports, who Public Safety Minister Bill Blair said will be on the lookout for anyone displaying symptoms as they distribute information pamphlets to all international travellers.

Automated questionnaires administered through touchscreens at entry points have also been modified to ask everyone who is arriving from overseas whether they have coughs, difficulty breathing or are feeling feverish.

New arrivals are also required to confirm that they're being asked to self-isolate for two weeks to keep COVID-19 from spreading.

Blair acknowledged during a news conference with other federal cabinet ministers "the many questions and concerns that have been expressed by Canadians about the activities that are taking place at our border in order to screen arriving passengers."

But he said the new restrictions on international flights as well as the ban on most foreign travellers will ease the pressure on airports and Canada's border agents and public health officials, who are responsible for trying to keep the disease from further getting into the country.

"Important measures that have been announced today ... will make the critical work of our border officers far more effective," Blair said. "For example, by limiting international flights to our four main airports, it allows for the concentration and efficient use of our limited resources."

The measures follow a weekend in which some travellers reported they were not being properly screened for the respiratory illness as well as images of long lines and crowded spaces in arrival areas, contrary to instructions not to gather in large groups.

Work is underway to ensure "proper social distancing" in arrival areas, Blair said, adding: "By significantly reducing the number of non-Canadian travellers, we will see a significant reduction of those travelling to Canada and therefore a reduction in those who need to be processed."

Concerns about the situation at local airports — and complaints about the federal government's efforts to screen passengers — have sparked some provinces and municipalities to step up their own efforts.

Hours before the federal government laid out its latest plan, Montreal city officials announced they were sending civil security and public health workers to Montreal-Trudeau International Airport to remind travellers they must self-isolate upon returning to Canada.

The measures are needed because travellers arriving in the province did not appear to be taking seriously Quebec's order requiring two weeks of isolation, said Dr. Mylene Drouin, Montreal's director of public health.

Travellers will pass by the employees before they leave the airport and be given information sheets and asked to note their symptoms and take their temperatures twice a day during the isolation period, Drouin said.

Montreal Mayor Valerie Plante said travellers must be made aware that upon arriving in Canada, they cannot go to work, school or anywhere else for two weeks.

While he didn't address what was happening at the Montreal and Edmonton airports specifically, Trudeau said he welcomed efforts by different provinces and territories to limit the spread of COVID-19 given each "are facing different realities and risks."

"At the same time, we also need to keep building an aligned, Canada-wide approach," he said, later adding: "We have seen many provinces take aggressive steps to protect their communities. I want to thank them for their work. It's time to take every precaution to keep people safe."

Meanwhile, the union representing Canada's border officers was set to meet with the CBSA on Monday afternoon after raising concerns last week about a lack of information and guidance to its members, one of whom has tested positive for COVID-19.

Four people in Canada have died of COVID-19, while provincial authorities had reported another 403 confirmed cases by Monday afternoon, as well as 15 presumptive cases. Ten cases have been resolved.

This report by The Canadian Press was first published March 16, 2020.

—With files from Sidhartha Banerjee in Montreal