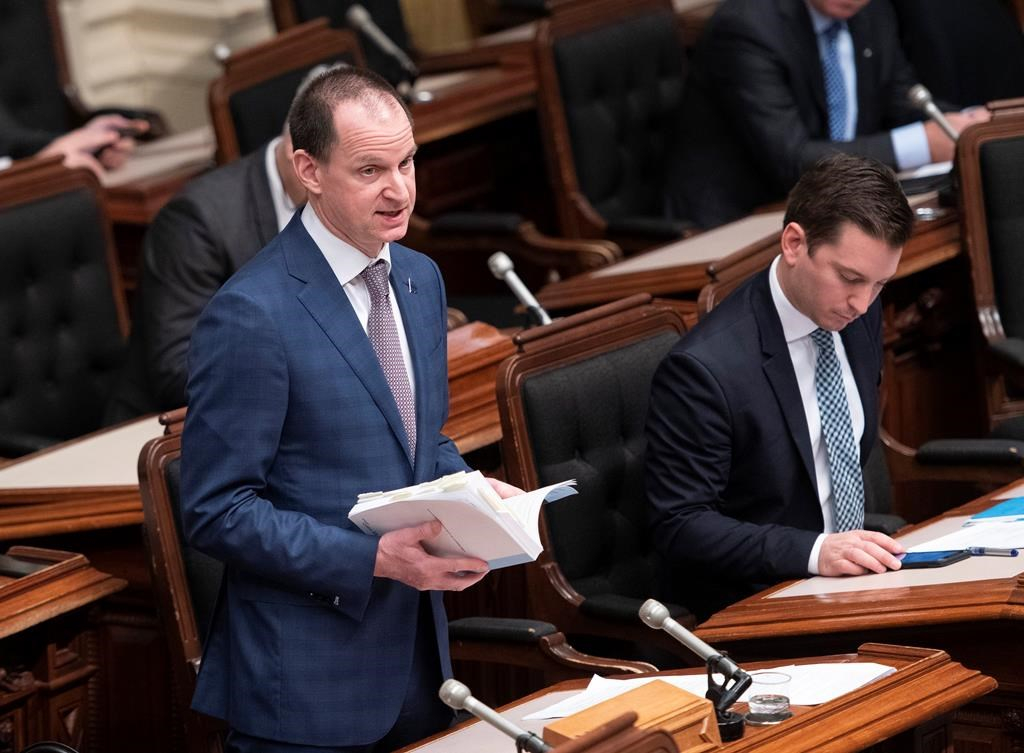 Quebec Finance Minister Eric Girard speaks on Tuesday, March 17, 2020 at the legislature in Quebec City. The legislature is adopting motions before shutting down until April 21. Photo by The Canadian Press/Jacques Boissinot
Previous story

Quebec Premier Francois Legault on Tuesday implored teens and young adults in the province to abide by extraordinary rules forbidding social gatherings amid the biggest spike yet in the number of cases of COVID-19.

Provincial authorities reported 24 more confirmed cases of COVID-19 on Tuesday, bringing the total to 74. The government says 2,949 people are awaiting results as it aims to increase the number of test clinics, while another 4,778 people have been given the all-clear.

Legault pleaded for athletes, artists, YouTubers and influencers — anyone with a young audience — to convince younger people it's not the right time to be hanging out.

"The information we have so far is that they don't take that seriously enough, they still like to be together and have parties," Legault told the province's daily briefing in Quebec City.

"What I want to say to young people today is (it's) not time for parties, it's not time to be together."

Legault said in Italy and South Korea, young people were shown to be integral in transmitting COVID-19.

Despite the premier's warnings, Health Minister Danielle McCann assured Quebecers that the province has the necessary equipment to deal with the crisis and is working with the federal government to get whatever else it needs.

McCann said Quebec has 18,000 regular hospital beds and 1,000 intensive care beds. The government will be freeing up 6,000 regular beds and 3,000 beds outside of hospitals to deal with any possible coronavirus-related crush.

Public health officials have run a number of different models to ensure they'll be ready for all eventualities, McCann said.

"We have to remember the large majority of people that will have COVID-19 will have mild symptoms, won't require hospitalization," McCann said.

Meanwhile, the province announced it is delaying the deadline for individuals and businesses to pay their provincial taxes in order to ease financial pressure caused by the novel coronavirus.

The measures, which will affect about two million individuals and 500,000 businesses, will immediately liberate about $7.7 billion worth of liquidity into the Quebec economy, Finance Minister Eric Girard said.

Girard said that instead of the usual April 30 deadline, individuals will have until June 1 to file a return and until July 31 to pay their taxes. Businesses will be required to follow their regular filing schedules, but can also wait to pay taxes until July 31. The delays, Girard said, will give individuals and businesses "more time, oxygen and liquidity."

Girard said the government is still encouraging anyone who can file and pay by the previous deadline to do so in order to reduce the financial impact on the province.

Quebec is the only province that requires individuals and businesses to file separate provincial and federal income tax returns.

Girard wouldn't say whether the federal government was getting ready to announce similar delays, but Prime Minister Justin Trudeau said he expects to make a major announcement on economic actions on Wednesday.

Trudeau said the Liberal cabinet would meet again Tuesday afternoon, and the government will have more to say about the upcoming tax season this week.

Girard added he was in constant communication with his federal counterparts, adding, "I can confirm that we are talking with them and collaboration is excellent."

The provincial delay will temporarily free up roughly $4.5 billion for individuals and $3.2 billion for businesses, Girard said, and the province will not have to borrow any money to make up for the shortfall.

"We already have the liquidity," he said.

He told reporters Quebec has never "been in a better financial position" to weather a global economic slowdown or any other burdens imposed by the spread of COVID-19.

The provincial budget, which Girard tabled March 10, projected a $2.7-billion surplus and increased program spending by 5.1 per cent over the previous fiscal year.

Government House Leader Simon Jolin-Barrette said the province would have a fiscal update in the near future as he announced earlier Tuesday that the provincial legislature was adjourning until April 21.