Trudeau says Canada won't be able to get all Canadians home 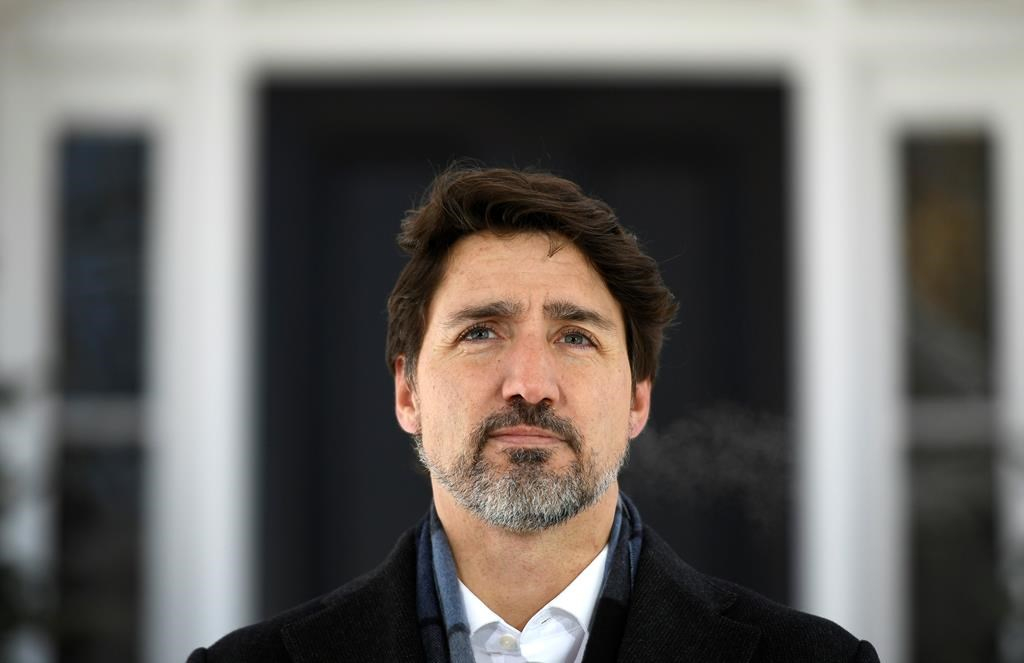 Prime Minister Justin Trudeau speaks at a press conference on COVID-19 at Rideau Cottage, his residence on the grounds of Rideau Hall in Ottawa, on Saturday, March 21, 2020. Photo by THe Canadian Press/Justin Tang
Previous story
Next story

As the federal government scrambles to bring Canadians home from foreign countries that have closed their borders and airports, provinces and territories are wrestling with what limitations need to be placed on internal travel to slow the spread of COVID-19 within Canada.

Close to 300,000 people around the world have been infected with the novel coronavirus, and the death toll was creeping close to 13,000 Saturday. In Canada, there are now more than 1,200 confirmed cases, and at least 18 deaths, including four deaths announced at the same Quebec care home.

As countries around the globe scramble to stop the spread of the virus, slamming shut borders and cutting off international travel, Canadians woke up Saturday to a new reality: the world's longest undefended border is no longer open for routine, casual traffic between Canada and the United States.

The ban on non-essential cross-border travel went into effect at midnight ET and will stay in place for at least 30 days as both countries scramble to curb the rapid spread of COVID-19.

Within Canada, Newfoundland and Labrador and Prince Edward Island are now requiring any one arriving in their provinces to self-isolate for 14 days, both domestic and international travellers. PEI added new screening measures at its borders to look for symptoms of COVID-19 among those arriving by car, ferry or air.

The Northwest Territories meanwhile ordered a ban to all arrivals except for existing residents looking to return home and some critical workers, including health care, law enforcement and people part of the supply chain for food, gasoline and other essentials.

The Northwest Territories reported its first confirmed case of COVID-19 Saturday, hours before the travel order was put in place. Until today none of Canada's three territories had any confirmed cases. The north is considered to be among Canada's most vulnerable locations to an outbreak of COVID-19, because of the limited health care access.

Northwest Territories travel order will also require individuals who do arrive in the territory to self-isolate in Yellowknife, Fort Smith, Hay River or Inuvik, hoping to keep any chance of someone with COVID-19 from spreading it to the smallest communities. Disobeying the order is punishable by a fine of up to $10,000 and six months in jail.

Health Minister Patty Hajdu said Saturday that closing internal borders is not something she wants to see happen but acknowledged it has been one of the things discussed between provinces and the federal government.

"That's a very live issue right now that we're talking about," she said.

Trudeau says Canada working hard, but won't be able to get all Canadians home

"Whatever we do as a country it has to be based on the best science available," she said.

Many Canadians have now spent an entire week practising the social distancing and self-isolation recommendations public health officials say are necessary to keep COVID-19 from spreading too fast for the health care system to manage. While most people who contract the virus will experience mild symptoms, including a dry cough and fever, a small portion will develop a critical pneumonia that will require intensive hospital care.

Canada has ramped up testing for COVID-19 dramatically in the last week, with more than 83,000 tests now completed, more than 80 per cent of them since March 14. That includes more than 20,000 tests conducted on Thursday and Friday.

Schools are now closed in most of the country, restaurants and bars mostly open only for take-out service, and movie theatres, concert halls and other public gathering spaces locked up.

Dr. Howard Njoo, Canada's deputy chief public health officer, said Saturday Canadians who have so drastically changed their daily lives to try and do their part to stop COVID-19, deserve a big thanks, but he warned people not to let up any time soon.

"There is no doubt our efforts are having an impact and not making these efforts is simply not an option," he said.

Hajdu added her thanks to the Canadians who are heeding the advice, and warned people to brace for the fact that these precautions are not going to end any time soon.

"We will be in this situation for a while," she said. "This is about months of social distancing."

Canada already requires anyone who is returning to the country to self-isolate for 14 days whether or not they have symptoms. Hajdu warned Saturday that you may not feel too sick from COVID-19 but if you ignore the advice and spread the virus around, you can kill someone else.

Anyone who is already showing symptoms of the virus is not permitted to enter Canada, but Prime Minister Justin Trudeau and Foreign Affairs Minister Francois-Philippe Champagne both said Saturday there are some herculean efforts underway to bring as many Canadians home from abroad as possible.

It is not known how many Canadians are outside the country and struggling to find a way back, though Global Affairs Canada said Friday more than 430,000 people have registered with embassies abroad to let them know their whereabouts.

Champagne said any Canadians in countries where commercial flights are still available are expected to make their own arrangements but he is negotiating with countries that have closed airspace and borders to try and get Canadians out. An Air Canada flight from Morocco to Montreal was scheduled for Saturday, and additional flights are in the works to bring Canadians home from Peru and Spain. Negotiations are also underway with governments in India, the Philippines, and Ecuador, Champagne said.

Trudeau said Canada is helping to fund the cost of the flights but that passengers will be expected to pay "a responsible" price for a ticket. Champagne said the best thing for someone trapped abroad to do is register with the local embassy, and they will receive information via text message about what kind of assistance is available to them.

The government is warning that not everyone who is trying to get home will be able to find a way to do so.

"So we are going to ask people to stay safe, to make smart choices and do the best they can in a situation that is unprecedented, exceptional and very difficult," Trudeau said.

This report by The Canadian Press was first published March 21, 2020.