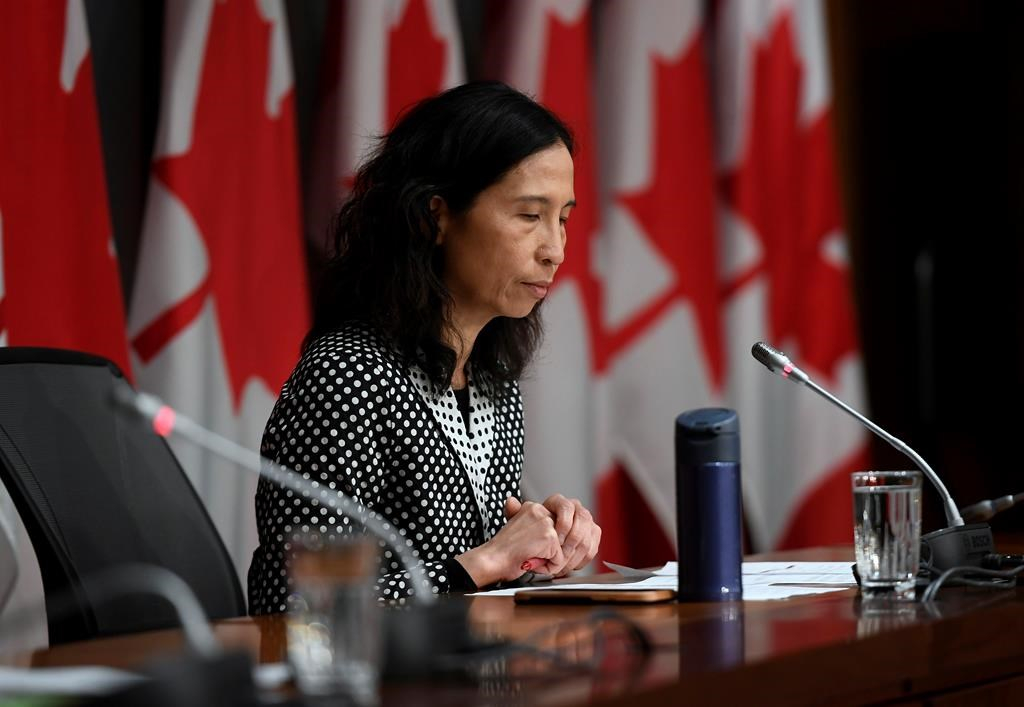 Chief Public Health Officer of Canada Dr. Theresa Tam listens to questions at a press conference on COVID-19 at West Block on Parliament Hill in Ottawa, on Tuesday, March 24, 2020. Photo by The Canadian Press/Justin Tang
Previous story
Next story

Regions across Canada are ramping up efforts to identify people with COVID-19 but some labs are facing a backlog due to diminishing supplies of essential chemicals needed for tests.

The World Health Organization has said expansive testing is the way to curb the pandemic, but global demand has outpaced the supply of reagents — the specific chemicals needed by laboratories to complete the tests.

The Center for Disease Control in the United States has also said that important reagents are "now are in short supply," a worry echoed by medical associations around the world.

They are all looking for the chemical solutions at the same time and, as a result, some Canadian health authorities and labs are seeking alternative supply chains.

Ontario Premier Doug Ford on Monday linked that province's huge testing backlog to a lack of reagents. He said health officials were doing everything they could to get more of the chemicals.

Agriculture Canada has been providing reagents to the provincial lab in Alberta as it waits for an order of the testing solution to arrive, said Alberta Health spokesman Tom McMillan. The lab is also working with the University of Calgary, University of Alberta and the University of Lethbridge to find any available supply.

"If the reagents run critically low, there are testing contingencies in place that will ensure we do not have to slow or halt COVID-19 testing," he said in an email.

Manitoba's chief public health officer, Dr. Brent Roussin, said this week he couldn't quantify the shortage in that province but noted it is a major factor in slowing down tests.

"Right now the major roadblock is the reagent and that is worldwide."

Manitoba's provincial lab is working on a solution, Roussin added, which may involve manufacturing its own reagents.

Health Canada is also exploring alternative COVID-19 tests and the national lab in Winnipeg is working to determine their efficacy.

Certain groups are being prioritized for testing in Canada, including anyone in long-term care facilities, patients who are already hospitalized and health-care workers.

"This virus has spread unbelievably quickly," said Jason Kindrachuk, a research chair in emerging viruses at the University of Manitoba.

"We didn't appreciate how quickly it would be spread across the globe."

He said when the novel coronavirus began to emerge in early January, some countries purchased significant amounts of important supplies. Those countries, including Australia, South Korea and Singapore, have been able to do expansive testing and have had success in mitigation and containment.

The pandemic has also resulted in critical shortages of personal protective equipment, ventilators and the swabs used in testing.

Kindrachuk said he saw similar supply issues when he was leading diagnostic efforts in Liberia during the Ebola outbreak in 2014.

Not everyone who should have been tested was, he said. The most important shift in that fight was getting people to keep distance from one another, he said.

"When we talk about physical distancing, this is not only keeping six feet away from people when you are out getting essentials. But this applies to everything that you do.

"All the short-term sacrifices will help us in the long term."

This report by The Canadian Press was first published March 25, 2020

— With files from Allison Jones in Toronto