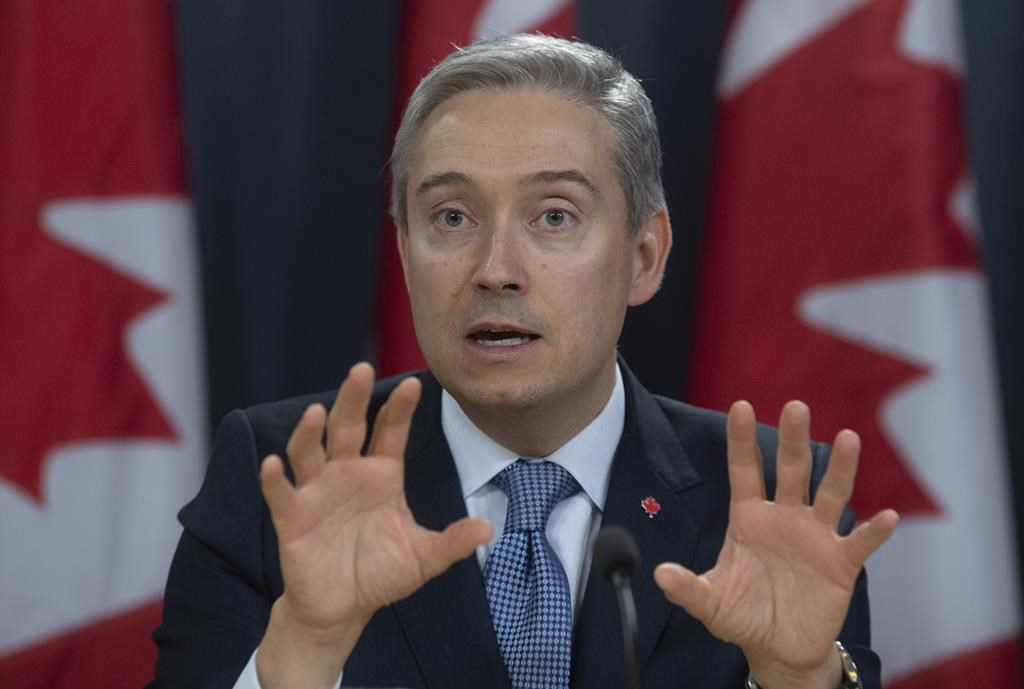 Foreign Affairs Minister Francois-Philippe Champagne responds to a question during a news conference in Ottawa on March 9, 2020. File photo by The Canadian Press/Adrian Wyld
Previous story
Next story

Canada and its G7 counterparts are concerned about the spread of disinformation in the COVID-19 fight, Foreign Affairs Minister Francois-Philippe Champagne said Thursday, stressing the need for a co-ordinated world response based on science.

Champagne was speaking the day after he and his G7 counterparts were able to speak via video conference to U.S. Secretary of State Mike Pompeo following President Donald Trump's heavily criticized pledge this week to end the American pandemic lockdown by Easter Sunday, April 12, for the good of the U.S. economy.

Trump took to Twitter on Wednesday to denounce the "Lamestream Media" for trying "keep our Country closed as long as possible in the hope that it will be detrimental to my election success.'' Days earlier he told Americans to practice social distancing and stay at home to prevent the virus from spreading.

In an interview with The Canadian Press, Champagne said he and his counterparts stressed the need to rely on science to make proper decisions in combating the outbreak now, and in the post-virus recovery phase.

"A lot of the talk we had was around co-ordinating our actions around the coronavirus," Champagne said when asked about the discussion with Pompeo. The group affirmed the need to "ensure essential people can cross borders, that global supply chains still function, and we have air bridges."

Champagne said he and his fellow ministers stressed the need to act in tandem and support international institutions, including the G20, whose leaders met Thursday by teleconference.

"What I'm concerned is about disinformation," Champagne said.

"We need to speak with one voice to say that we need to stick to science, we need to work with the multilateral organizations. We need, as the world democracies, as the West to strengthen the institutions that embody the international rules-based order."

Champagne didn't mention Trump by name, but he stuck to the foreign-policy line that the government has maintained to navigate the actions of the mercurial U.S. president who has shown disdain for world bodies, ranging from the United Nations, NATO, the World Trade Organization and others.

"Whether it's the UN system or the World Health Organization ... we need to be behind them. But also the G7, that we have a role to play, that we combat disinformation at a time when we need to inform citizens."

The G7 ministers also discussed the need to ensure the free flow of key medical supplies and research towards developing a vaccine against the virus, Champagne said.

"When it comes to science and making sure we work together towards a vaccine these initiatives are already ongoing. If there was a time in history, where we need to co-ordinate, consult and co-operate, this is the time," he said.

In his daily briefing on Thursday, Trudeau defended Canada's decision to send 16 tonnes of medical equipment to China in February to help it cope with the initial COVID-19 outbreak. He said it was part of Canada's response to a global crisis.

"I can assure everyone that the federal stockpiles have been sufficient to meet the needs of the provinces until this point," Trudeau said, adding that in the coming days the government would be receiving "millions more items" that are needed.

He said Canadian businesses "are tooling up production to make sure that we have enough, not just for Canadians, but for friends and allies around the world who need it."

When the initial outbreak occurred in China, Canada's chief public health officer, Dr. Theresa Tam, said the World Health Organization asked other countries to help China with medical supplies in a bid to contain the spread of cases.

"We can only overcome COVID-19 if we take action together as a global community," said Trudeau. "That means making sure the World Health Organization and our public health agencies have the resources they need. It means working together to develop a vaccine, identify treatments and increase testing."

Meanwhile, flights for Canadians stranded abroad are continuing into next week, but Champagne said it is becoming harder to sustain them.

"Countries are facing more and more airspace closures, border closures, airport closures, and so it's becoming increasingly difficult," he said.

"Countries are taking very severe measures in their countries to restrict the movement of people, to protect the health and safety of all citizens. So, we will continue, but it's true it's becoming increasingly difficult."

Champagne has said previously that not every stranded Canadian who wants to return will be able to do so. Global Affairs Canada has said it will offer consular assistance to Canadians who remain in foreign countries.

And leaders need to stop

And leaders need to stop acting like parents of 5 yos, who can't know the facts, in addition to swallowing some of their own medicine, keeping abreast of the science and stop playing follow the leader. Show some gumption, and require their own people to review recent science and tell the people what it says.
Mr. Trudeau, who is, after all, a trained actor, could drop the tone of a daddy speaking to a naughty pre-schooler. Sometimes his words are right, but the tone reads a different message from the words themselves.