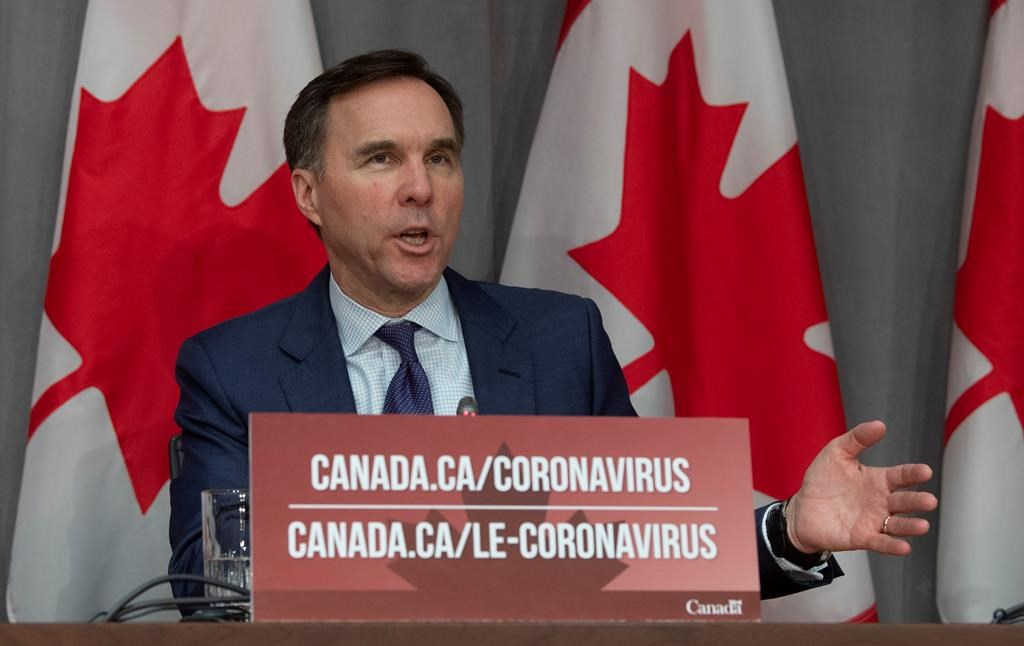 Minister of Finance Bill Morneau responds to a question during a news conference in Ottawa, on Friday, March 27, 2020. File photo by The Canadian Press/Adrian Wyld
Previous story
Next story

Parliamentarians will soon find themselves voting anew on spending measures to help the country to combat the financial fallout from COVID-19 — help that is going to cost the federal treasury at least $95 billion — as the result of changes the Liberals have promised in recent days.

It was just last week that Parliament hastily passed a suite of spending and lending to help businesses and workers affected by the pandemic, in a special sitting with only a handful of MPs.

On Wednesday, Prime Minister Justin Trudeau said he's planning to have MPs and senators come back for another sitting to pass additional items in what he described as perhaps the biggest economic bailout and social program this country has ever seen.

The legislation created a 10 per cent wage subsidy for small businesses, but officials briefing reporters about a new 75 per cent subsidy program said the bailout bill didn't include the expanded program.

The Liberals didn't put a timeline on when Parliament will be recalled — a process that, under the practice used last time, will require picking a small group of parliamentarians to review and vote on measures.

"The magnitude of the measures that we know are necessary means that it would be a good idea to bring Parliament back to work on them," Deputy Prime Minister Chrystia Freeland said during a midday press conference.

Opposition parties will have a chance to hear more from Finance Minister Bill Morneau when he appears Thursday afternoon in a teleconference meeting of the House of Commons finance committee.

Conservative Leader Andrew Scheer said his party is ready to amend the law, but argued the problem shouldn't have happened in the first place.

The Tories objected to a clause that would have given the Liberals the power to spend and tax without parliamentary approval through to December 2021, which the Liberals ultimately backed down on.

"Instead of focusing on legislation to help businesses get through this crisis, they spent their time focusing on a massive power grab to give themselves new and unprecedented powers," Scheer said during a press conference in his home city of Regina.

In a statement, Bloc Quebecois Leader Yves-Francois Blanchet said the wage subsidy would have been part of the original bill if not for Tories who asked for its removal.

He asked the government to provide the wording of the new bill to all parliamentarians and that the parties agree on the final text before anyone travels to Ottawa.

The new subsidy will cost $71 billion while a direct benefit to out-of-work Canadians will cost about $24 billion, Morneau said in his own news conference Wednesday. The combined measures bring direct financial aid for the economic crisis to more than $105 billion, he said. On top of that is $85 billion in tax deferrals for individuals and businesses, and $65 billion in loans.

Companies that qualify for the larger wage subsidy will need to show at least a 30 per cent drop in revenues due to COVID-19 compared to the same month last year — or a more recent month for a reasonable comparison for a business that is less than a year old, like a startup.

For charities and non-profits, some eligibility details are still being worked out, officials said.

Employers receiving the benefit can be of any size, but can't be publicly funded, and recipients will be expected do whatever they can to pay the remaining 25 per cent of their employees' wages.

Officials said it will take between three and six weeks to flow funding that will be capped at $847 per employee, per week.

The Canadian Federation of Independent Business said several design features and unanswered questions may prevent the program from meeting its goal of reducing layoffs.

"If employers are not able to know with certainty whether they will qualify for the subsidy, many will be forced to lay off workers," CFIB president Dan Kelly said in a statement.

Any worker who receives the wage subsidy can't also receive a $2,000-a-month emergency benefit that requires an eligible recipient to not be earning any money.

Kevin Milligan, a University of British Columbia economics professor, wrote this week that the government will have to consider how to use the benefit to help those with a severe drop in earnings, as well as students.

His report for the C.D. Howe Institute said "more policy work is needed to fortify" the benefit so it can fully help "bridge our economy across the crisis."

The schedule was designed to avoid overwhelming already taxed systems.

In the last two weeks, some 2.1 million people have applied for employment insurance benefits, Employment Minister Carla Qualtrough said —a number dramatically higher than what the program normally sees. Federal workers have processed more than 430,000 claims, and a new system being implemented Wednesday will help quickly address the backlog, Qualtrough said.

Those approved for EI will be automatically moved over to the new benefit.

All this talk of billions of

All this talk of billions of dollars, but no discussion about what is a dollar? With the international economy tanking spectacularly, savings and investments rapidly shrinking, Tarsands crude at 5 bucks a barrel, what gives our dollar value? How will we pay for all this "debt" with a wrecked economy?

I am terribly concerned about

I am terribly concerned about the huge debt we are creating for ourselves. How are we to repay these billions and billions of dollars if we keep "printing dollars"? Do we not devalue our dollar by increasing debt? If the dollar drops in value does not all the existing debt require more dollars (devalued) to pay for existing debts as well as all these new billions? At what point does the government send out letters to pensioners for example stating they can no longer fund the pension? There is something dreadfully wrong with attempting to save an economy by "printing money" which ultimately destroys that same economy. Is the government attempting to create a false economy to save the banks?