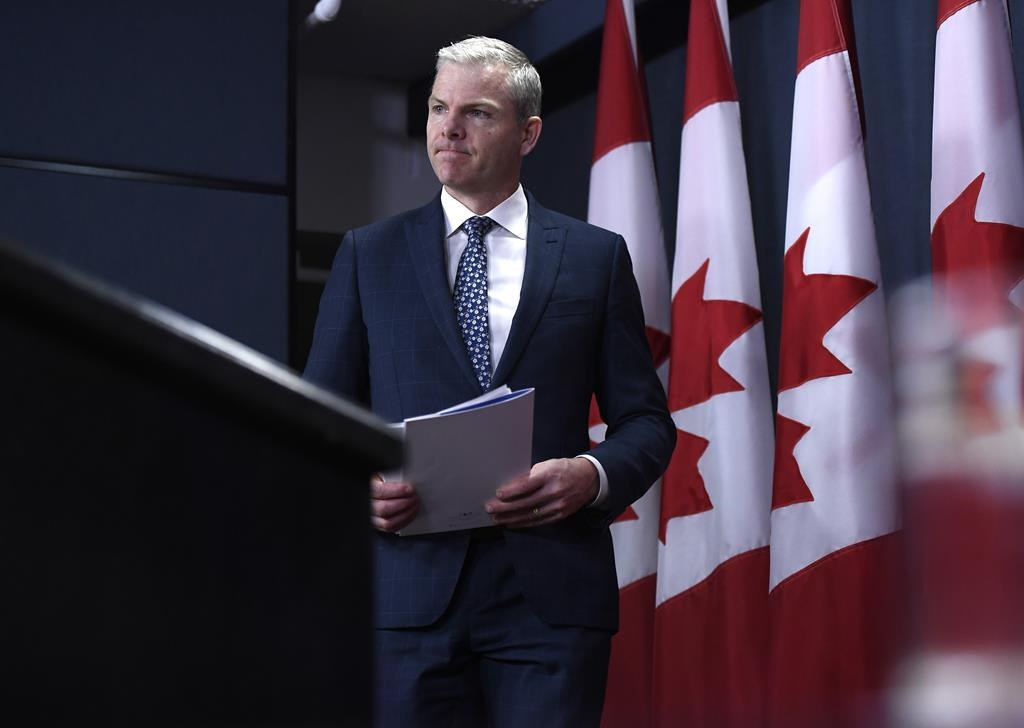 Tim McMillan, President and CEO of the Canadian Association of Petroleum Producers, arrives for a press conference in Ottawa on Monday, June 3, 2019. File photo by The Canadian Press/Justin Tang
Previous story
Next story

Canada's oil and gas producers have asked the federal government to freeze the carbon tax and delay new climate change regulations while the industry weathers the storm of COVID-19.

The combination of plummeting demand and a production war between Saudi Arabia and Russia pushed prices down all over the world. In Western Canada, heavy crude prices fell below $5 a barrel again this week, less than a tenth of what it traded for a year ago.

The crisis has led to an all-hands-on-deck lobbying effort, with CAPP recording at least 29 meetings with federal officials and cabinet ministers between March 12 and March 29.

Environment critics, however, see the list of demands as the industry's attempt to use the COVID-19 crisis as cover to curb health and safety policies, and put off regulations that will help the environment.

He said many of the requests are about things CAPP has repeatedly lobbied against without success up to now, including the carbon price, clean-fuel standards, and restrictions on methane emissions from oil production.

In an interview with The Canadian Press, McMillan said the root of the requests come from the industry's need to maintain safe and essential operations as it follows health guidelines. That includes limiting employees on worksites and maintaining physical distancing for those who need to be there.

The industry also wants to ensure no new laws or regulations are implemented until proper consultations can be completed, and that the industry is given time to recover from this price shock. McMillan told O'Regan the fossil fuel sector wants to both survive the crisis and be part of Canada's economic recovery when it has been resolved.

"We encourage them to have a tools-down approach until we have a resolution of the crisis," he said Thursday.

Among CAPP's requests are delays to reporting requirements for greenhouse gas emissions, deferring the 2020 requirements for a number of reports on compliance with environmental and safety recommendations, and extending deadlines for on things like air and water pollution.

The industry also wants promised changes to the Canadian Environmental Protection Act to be put off because the needed consultations can't happen while public gatherings and travel are not allowed. The law, which governs toxic substances, has been under review since 2016 and the House of Commons environment committee recommended more than 80 changes to it in 2017. The Liberal government held off on implementing any of them until after the 2019 election.

Finally, CAPP wants the Liberal government to delay some major policies and regulations allow the industry to recover from the economic shock. That includes freezing the carbon price at $30 a tonne for the foreseeable future, putting off plans to implement a clean-fuel standard from 2022 to 2025, and doing nothing more to cut greenhouse gas emissions, including bringing in its promised legislation to set five-year, legally binding targets on its way to net-zero emissions by 2050.

Marshall said the industry is saying it isn't safe to send in people to do the required monitoring and testing to meet environmental standards, but is continuing to have hundreds of people on oilsands worksites. There was a COVID-19 outbreak at one of those sites this week.

Marshall said the industry says this is about health and safety but much of what it wants delayed or suspended puts human health at risk from more air or water pollution.

Mia, do you think the

Mia, do you think the petitions and letters flooding into PMO are having any counter effect on the fossil lobby's power?

CAPP's environmental agenda is unchanged since the Harper years:
• Cut back on research and information-gathering. What we doesn't know won't hurt us.
• Download the costs of cleanup onto the public purse, future generations, and the environment.
• Privatize the profits, socialize the costs. Let corporations walk away. Stick the public with the cleanup tab.
• Out of sight, out of mind. If people aren't living nearby, no need to clean up contaminated sites. If First Nations are nearby, never mind.
• Slash govt programs to reduce the financial deficit, but leave our children with a massive environmental and public health deficit.

"Happy to oblige, Harper's team introduced two omnibus bills— the so-called "budget bills" C-38 and C-45—that incorporated hundreds of pages of legal changes repealing or amending many federal environmental laws.
"… The changes included replacing the Canadian Environmental Assessment Act with weaker legislation, scrapping over 3,000 environmental reviews in the process; gutting the Fisheries Act by weakening fish habitat protection, removing protection for most non-commercial fish species and broadening the govt’s powers to allow harm to fish and fish habitat.
"Other key changes included handing environmental oversight of major energy and pipeline projects to the National Energy Board (NEB); and lifting legal protection to over 99% of Canada’s lakes and rivers by changing the Navigable Waters Protection Act to, tellingly, the "Navigation Protection Act"— shifting the focus of the law away from protecting water to protecting transport."
Fisheries and Oceans Minister Keith Ashfield (2012): "…the amended Fisheries Act will provide flexibility and establish new tools to authorize deposits of deleterious substances."
"How Big Oil lobbied itself out of its biggest projects" (National Observer, 24 Nov 2015)
•www.nationalobserver.com/2015/11/24/news/how-big-oil-lobbied-itself-out-...

-The oil industry also tried to silence environmental critics via Revenue Canada audits.
-Harper got rid of The National Round Table on the Environment and the Economy.
-Harper instructed the RCMP to spy on environmental and indigenous groups.
-Harper stifled govt scientists.
-The Harper Govt shut down "B.C.'s command ctre for emergency oil spills at a time when the province is facing 2 possible pipeline projects and a potential spike in tanker traffic in West Coast waterways."
"Feds to close B.C. oil-spill centre amid talk of expanded pipeline projects" (Canada.com)

CAAP's contempt for the environment and all Canadians whose health and economic well-being depend on it is shining through.

I dont know who you are but

I dont know who you are but you sound very informed and willing to share your detailed knowledge. I really appreciate it .
My #1 nightmare of Herr Harper's regime was the trucking away of thousands of precious books from national libraries that held decades' worth of detailed maps and charts about species and waterways TO THE DUMP WHERE THEY WERE BURNED -- contracted out to private companies for profit of course . And scientists smuggling some books to their homes to save them--- our equivalent to citizens in Mali burying ancient texts from the library in Timbuktu to save them from the marauding Boko Haram.
But we continue that regime with the exact same destroying mob of nobs here in Ontario right now as in their obscene"pay to slay" ****environmental protection leg"!!!!!!!!! Makes me physically ill just to think of it

This, after the Alberta oil

This, after the Alberta oil industry just came off a year of record executive pay increases and awarded stock options, some individual packets approaching $30 million. It's hard to reconcile that with the now 6-year recession due to outside forces lowering world oil prices beyond Alberta's control.

What CAPP is not telling us is that not all companies are complaining about low oil prices. The ones who own refineries are in fact doing very well because they mine their own bitumen feedstock and deliver it to their own refineries (some located in the US and employing American labour) at very low prices, then enjoy the huge price spread between the raw feedstock and the refined products.

The Russia-Saudi price war is one more object thrown onto the precarious pile where the balance is tipped at the slightest breeze. Oil has had its economic cake for 50 years, but now it is seen increasingly as economically unstable as well as a threat to the planet.

The CAPP-recommended delay in carbon tax increases and new environmental policies to 2025 will place it smack in the middle of the ramped up schedule of convoys of ships delivering electric vehicles under all the major brand names en masse, but at much lower prices than we see today. It's hard to imagine a CAPP PR flack issuing a counterpunch argument to that, but I wouldn't be surprised to hear one or two going rogue and calling for border closures and import bans on perfectly legitimate products.