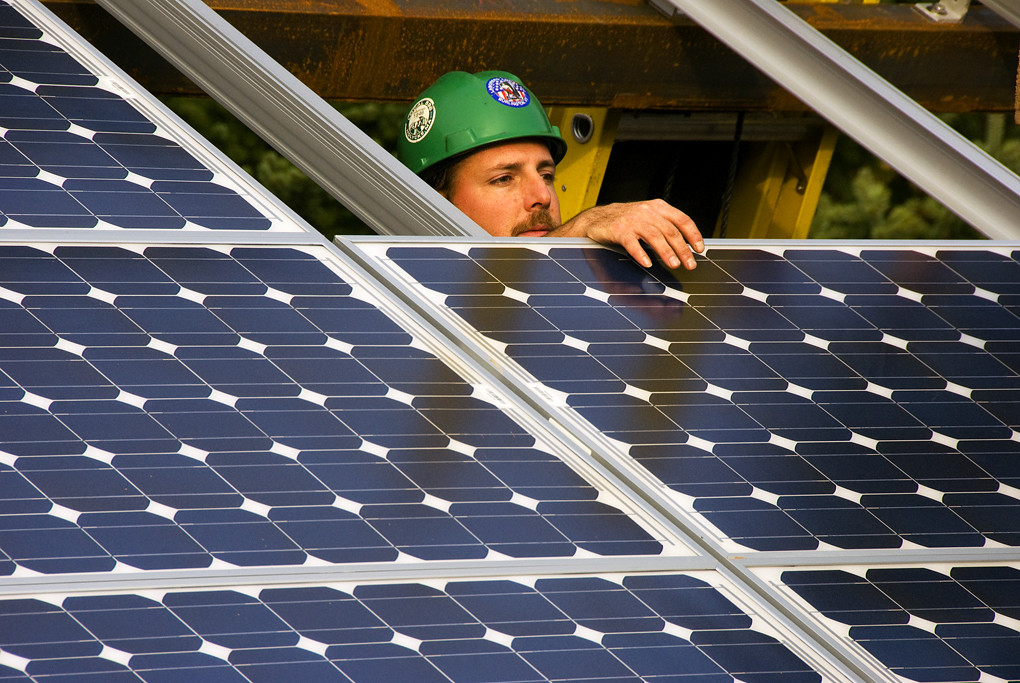 A worker checks the placement of a solar panel. Photo:Flickr/Oregon Department of Transportation (CC BY 2.0)
Previous story
Next story

In early March, when COVID-19 cases began popping up across the U.S., the Philadelphia-based company Solar States was having a really good year, with at least six months’ worth of contracts already lined up. The 30-person company installs solar panels on homes and commercial buildings and hosts workforce training programs for high school students and unemployed Philadelphians, often hiring its graduates.

The fallout happened fast. The first thing Solar States did was distribute masks and gloves to workers, company founder Micah Gold-Markel told Grist. But with the number of cases going up and guidance from officials changing on a daily basis, soon the company was holding a meeting every morning at 6:30 AM to check in with the staff and rearrange crews based on who was still comfortable going into houses. Eventually clients didn’t want workers coming inside at all. The company considered continuing with whatever external work they could do, but a lot of clients were financing their panels through loans that would not pay out until the entire project was complete.

“It was becoming a real logistical nightmare,” said Gold-Markel. By late March, there was no alternative — Solar States closed up shop.

Gold-Markel said he applied for a Paycheck Protection Program loan to be able to pay his employees through the crisis but hasn’t received anything yet. On Wednesday, the White House announced that funding for the program, which was part of the $2 trillion economic relief act passed less than two weeks ago, has already run out.

This story is not unique to Solar States, of course. All kinds of companies and their employees across the country experienced a similar free fall last month, and now 22 million Americans have filed for unemployment. But the clean energy sector has been hit especially hard. Solar States’ 30 laid-off employees are among more than 106,000 clean energy workers who lost their jobs in March, according to a new analysis released on Wednesday. BW Research Partnership, which performed the analysis, projected that number will go up to 500,000 by the end of June.

According to E2, a clean energy advocacy group that commissioned the analysis, “clean energy” is a vast sector that employed nearly 3.4 million Americans in 2019. It includes more than 2 million jobs in energy efficiency, like weatherizing houses and manufacturing Energy Star appliances; half a million jobs in renewable energy, including solar, wind, hydropower, and geothermal; more than 250,000 jobs building hybrid and electric vehicles; about 150,000 jobs in power grid modernization and installing energy storage for the grid; and another 40,000 jobs in biofuels like ethanol and biomass. In total, clean energy workers outnumbered fossil fuel workers three to one last year.

“It’s a huge and important part of our economy,” E2 executive director Bob Keefe told Grist. “Anything that Congress does to get our economy back on its feet and to get America working again should absolutely include a focus on an industry of that size.”

Once people begin to move freely again, whenever that may be, Keefe is concerned that spending money on energy efficiency retrofits and solar panels will not be at the top of anyone’s list of priorities. Advocates are calling on Congress not only to rescue clean energy firms in future recovery packages, but also to use the industry as an economic driver to help the country rebuild, as it did in 2009 with the American Recovery and Reinvestment Act.

In an updated version of its 2020 Clean Jobs America report, E2 outlines what such a package should include: a $30 to $90 billion program to upgrade transmission lines, improving grid resilience and preparing it for widespread renewable energy deployment; a program to build a national electric vehicle charging network; a building electrification program. The report also calls for increasing funding to various Department of Energy programs like job training and research and development.

Keefe believes some of these initiatives don’t need to wait until the threat of COVID-19 has passed. “Why can’t we get some of the 150,000 or so people who work in grid modernization at utilities and in energy storage out there upgrading our ancient power grid in America?” he said. “You can do some pretty good social distancing when you’re a couple hundred feet up on a power line somewhere.”

Coronavirus has wiped out 106,000 clean energy jobs so far. Can the US get them back?

Advocates are also asking Congress to extend and expand federal clean energy investment tax credits. Gold-Markel of Solar States said this was hugely important. The company had promised clients it would get their projects done by the end of the year so they could take advantage of the 26 percent solar tax credit, which will be downgraded to 22 percent next year, and is set to expire entirely at the end of 2022. “It’s going to be a much different value proposition for the customer if they don’t get it,” he said, “and it’s going to put us in a sticky situation.”

Despite getting the rug pulled out from under his company, Gold-Markel thinks that in the long term, the solar industry will bounce back. “I think solar is inevitable. It is the way of the future,” he said. “I just don’t know whether this year we’ll recover right away, or it’s going to be next year, or the year after.”