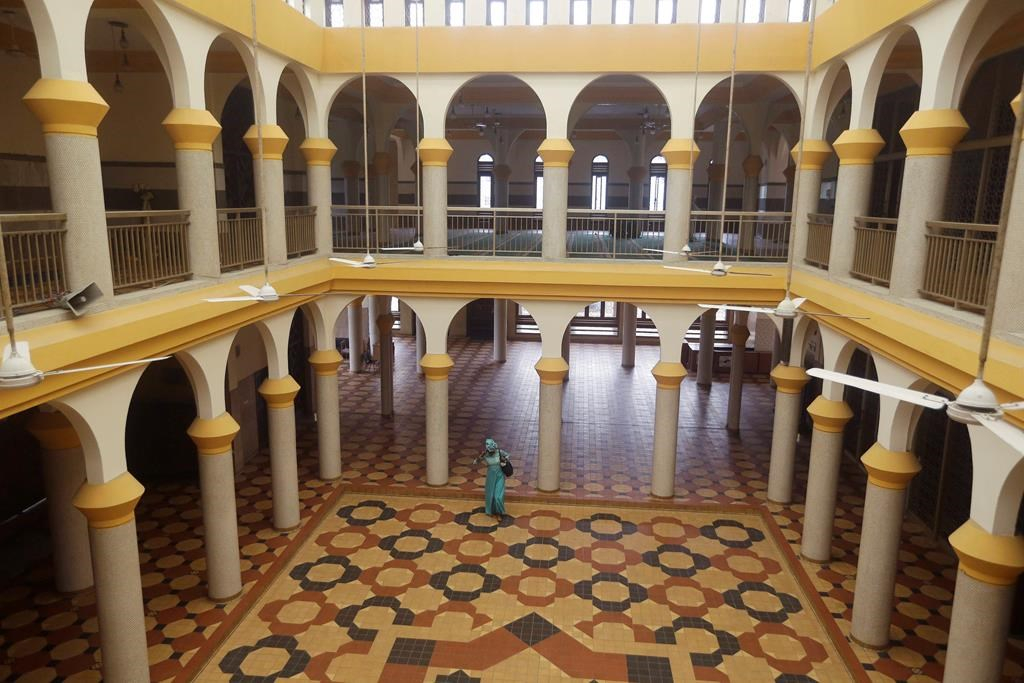 In this March 20, 2020 photo, a woman takes a call inside the empty central mosque in Lagos, Nigeria, after the government banned all religious activities for four weeks following confirmation of coronavirus cases. File photo by The Associated Press
Previous story
Next story

This week is usually when kids in the Muslim community get excited about an annual trip to see the new moon that marks the start of Ramadan, says Cindy Jadayel, a member of the Mosque of Mercy in Ottawa.

But she says it'll be one of many community events that will be cancelled during Ramadan this year.

The month of Ramadan — in which Muslims go without food or drink from sunrise to sunset every day — often features gatherings where families and friends break fast and pray together. It's set to start on Thursday based on the Islamic lunar calendar, and will last until May 23.

The moon sighting trip follows an early tradition where religious leaders would declare the start of the new month.

"(Kids) get excited about it," said Jadayel, who works on the committee for the Mosque of Mercy.

"There's times when you drive out and you see something, that it's a new month," she said, adding that there's always a sense of suspense because it can often be too cloudy to clearly see the moon.

Those events, as well as nightly congregational prayers and community events at the mosque, will be cancelled due to the COVID-19 pandemic.

Not having the community aspect of Ramadan this year "is going to be challenging," said Jadayel.

"We have to work harder this year to have families happier in the home because we can't go out and celebrate with others."

Sallah Hamdani, a former president of the Islamic Society of St. Catharines, Ont., says Muslims will try and look on the bright side of the time alone this year.

"You might not have to focus on hosting a dinner," said Hamdani, pointing out that it can be stressful for families to put together elaborate dinners at home while already dealing with a difficult fast.

"Instead you can enjoy that dinner or breaking the fast with your immediate family and creating a new custom that you probably had not implemented previously."

Daily prayers and weekly sermons have been cancelled, as well as Arabic classes, day camps and Qur'an readings that are often hosted by mosques.

"It was a shock, but since then we have almost all of our programs online," said Jadayel, who said they have hundreds of students studying online in various classes, as well as an online pre-recorded sermon that is posted every week.

She says congregants are also meeting on group calls to maintain a sense of community.

"We're meeting every week and we can feel that sense of gathering, it's like we're in the same room together."

In St. Catharines, Hamdani says one of the hardest events during physical distancing this year will be Eid al-Fitr, a multi-day holiday that celebrates the end of Ramadan.

"Not being able to get together for Eid will have a larger impact on the community than any other thing," said Hamdani.

"Whether you are a practising Muslim or not, Eid is a day of joy and a day of getting together and remembering your family."

Jadayel also pointed out that some mosques may see a drop in donations because up to half of all donations come during Ramadan.

Nonetheless, the Mosque of Mercy is still trying to provide for the community during Ramadan, and is offering packages of non-perishable food to seniors and people with compromised immune systems — for Muslims and non-Muslims alike.

"We don't want people to feel like they're in dire straits and that there's no one available to help them," she said.