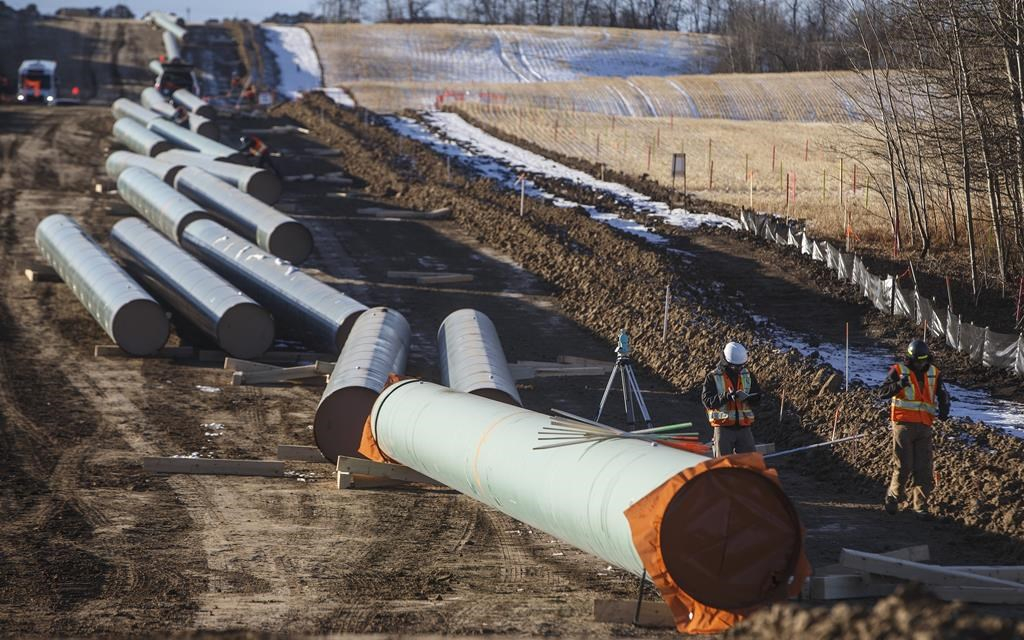 Workers survey around pipe to start of right-of-way construction for the Trans Mountain Expansion Project, in Acheson, Alta., on Tuesday, Dec. 3, 2019. File photo by The Canadian Press/Jason Franson
Previous story
Next story

Andrew Leach, an energy economist at the University of Alberta, said the long-term forecast for both natural gas and oil remains steady, even as some companies scale back workforces to meet safety protocols.

"I think the consensus amongst most people is that there isn't a big impact of what we're seeing right now beyond the timeline of the pandemic and the recovery," he said.

Global oil prices recently plunged amid oversupply concerns as storage tanks near capacity while refineries are reducing output as economic activity slows during the pandemic. The low prices have forced some producers to cut production in Canada's oilpatch.

Werner Antweiler, an energy economist at the University of British Columbia, said the oil industry is facing a "double whammy" of a global decrease in demand coupled with a Saudi Arabia-Russia price war. A recent agreement by OPEC and other countries to reduce production doesn't go far enough to balance supply with falling demand, he said.

But pipelines face slightly different market forces than the producers who fill them. There may be increased pressure on pipelines as Canadian producers seek to get oil to markets at the best price possible, while the spectre of American protectionism could also increase the pressure to get Canadian oil to Asian refineries if U.S. ones becomes unavailable, Antweiler said.

Trans Mountain said in a statement that construction on the expansion project is progressing well at its terminals and along the right-of-way in B.C. and Alberta with COVID-19 safety measures in place.

Current oil prices don't have a direct impact on the project, the company said. Its customers have made 15- and 20-year commitments for roughly 80 per cent of the capacity in the expanded pipeline. It's still due to come into service in late 2022, the statement said.

The existing Trans Mountain pipeline operated at its maximum capacity for the first quarter of 2020, the company said.

LNG Canada has reduced its workforce to manage the risk of spreading COVID-19, director of corporate affairs Susannah Pierce said in a statement. But the company and its engineering procurement and construction contractor, JGC Fluor JV, continue to hit "critical construction milestones," she said.

Trans Mountain, LNG Canada say they are on track despite pandemic

Antweiler said liquefied natural gas has a good long-term outlook because of the ongoing switch from coal to gas globally and the increase in demand for energy in Asia.

"These two things, they will continue once the economy returns to normal."

In the case of Coastal GasLink, the 670-kilometre natural gas pipeline that would feed LNG Canada's export terminal on the B.C. coast, the pandemic may never rival the disruption earlier this year by its opponents, Leach said.

Construction on most projects that are underway could be vulnerable to disruptions caused by outbreaks but otherwise appear to be continuing at status quo. Leach biked through a Trans Mountain construction zone in Edmonton on Thursday and it seemed unchanged, he said.

"It feels like it's going full speed ahead," he said.

A pipeline like Trans Mountain, which is regulated by the Canadian Energy Regulator, is not a commercial venture in the sense that it doesn't take full merchant risk and has bounds on the tolls it can charge. It's also largely able to pass any extra costs on to producers, Leach said.

"They can't charge whatever the market will bear at any point of time and as a consequence of that they also have some protection for their capital investments," Leach said.

The wildcard project is Keystone XL for several reasons, including that it doesn't have all its permits and is not materially under construction, he said.

"It's relatively early in the process and the cross-border nature of it, the length of it, all these sorts of things make it more challenging in the current market. So that's probably one of the projects that is most likely to be affected," Leach said.

TC Energy, which owns the project, did not respond to a request for comment.

While some have mused that the oil price plunge signalled the beginning of the end for oil, Leach and Antweiler don't buy it.

It would take broad public policy shifts or an energy technology revolution to stimulate a mass shift away from oil dependency. If anything, Leach said physical distancing habits could discourage drivers from making the switch to public transit, for example.

"I'd love to see the oil industry fade away more quickly than it will, but as an energy economist I still know we depend on oil for transportation," Antweiler said.

He said he expects demand for oil to remain stable for the next few years and it will be up to countries around the world to curb demand through policy until cleaner options become more cost effective.

"There will be potentially a reduction in demand for oil but it won't be as fast as some hope," he said.

This report by The Canadian Press was first published April 26, 2020.

delusional spin.
without immediate ,massive transition away from fossil and the rampant gobbling of planetary systems, this will be only the first of ever more devastating pandemics. (see Guardian opinion today)

Protesting crap like this should be declared an essential service.

Please stop printing Canadian Press corporate puff pieces. This is not real journalism, and it's shilling is readily available in our neo-liberal MSM.