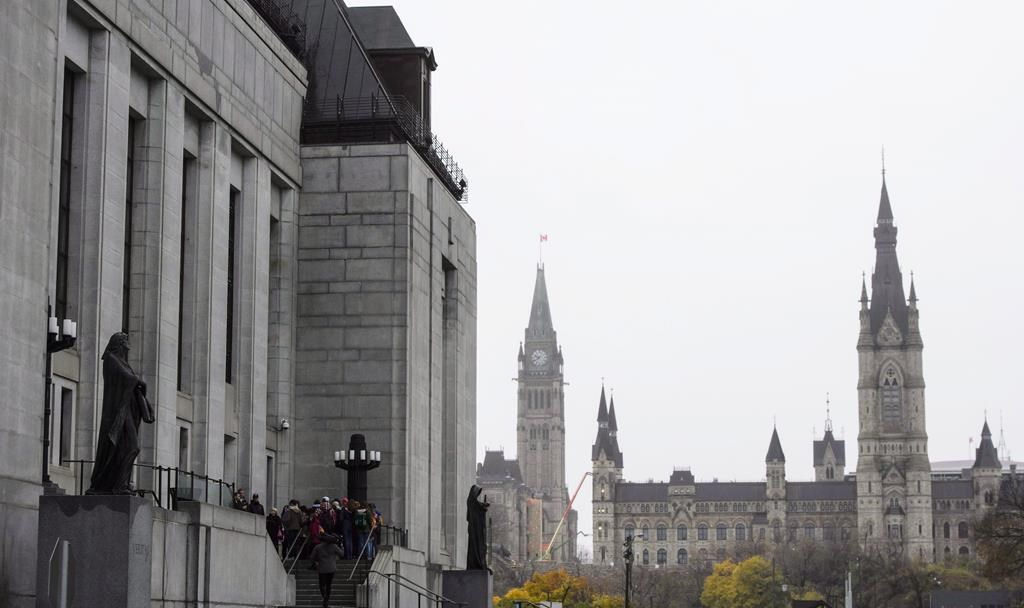 The Supreme Court of Canada is shown in Ottawa on Friday, Nov. 2, 2018. File photo by The Canadian Press/Sean Kilpatrick
Previous story
Next story

Canada's national fight over the carbon tax won't get sorted out at the Supreme Court of Canada until the fall.

The Supreme Court says appeals from both Saskatchewan and Ontario over cases that upheld Ottawa's right to impose a carbon price on provinces will be heard in September.

The cases were to go forward last month but were postponed along with all others scheduled for March, April and May when the court shut down due to the COVID-19 pandemic.

Four hearings, including three involving criminal trials, will be heard by videoconference in June.

The court has agreed to hear the two carbon tax cases and two unrelated matters in September.

All other cases will be rescheduled for the court's fall sitting, which is set to begin Oct. 5.

Chief Justice Richard Wagner thanked everyone for being flexible.

"Your creativity and resourcefulness have helped ensure that we continue to deliver the justice our duty to parties and all Canadians requires," he said in a statement.

The carbon tax battle has been raging in Canada for several years. On one side is the federal Liberal government, which implemented the national price on pollution last year. On the other, provincial conservative governments who argue Ottawa is overstepping its bounds.

It is a critical part of the Liberal government's plan to cut Canada's emissions to 70 per cent of what they were in 2005 over the next 10 years. To offset the financial impact to consumers, Ottawa issues carbon rebates on tax returns that for most Canadians exceed how much more they pay because of the carbon tax.

Several provinces say carbon taxes don't cut emissions, they just raise prices for consumers. The federal carbon tax applies only to provinces that do not have an equivalent price on pollution of their own.

Saskatchewan and Ontario both challenged the tax in court, and in both cases courts ruled Ottawa was within its rights to enact the policy. Both provinces appealed to the Supreme Court of Canada.

Alberta won a court challenge in that province this past winter, but last month appealed that decision to the Supreme Court hoping to have the case heard at the same time as the other two provinces. The court has not yet determined if that will happen.