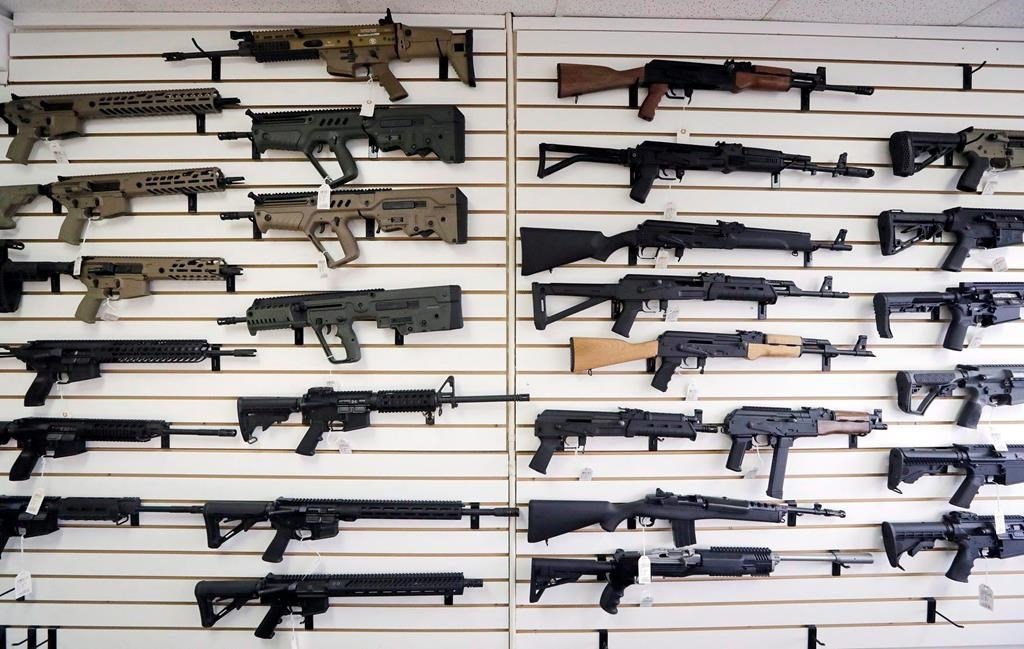 In this Oct. 2, 2018, semi-automatic rifles fill a wall at a gun shop in Lynnwood, Wash. File photo by The Associated Press/Elaine Thompson
Previous story
Next story

The federal government is poised to begin fulfilling a key electoral promise by banning a variety of assault-style rifles, including the type used in the 1989 mass shooting in Montreal.

During the fall election campaign, the Liberals said guns designed to inflict multiple human casualties have no place in Canada.

One source familiar with the plan, but not authorized to speak about it publicly, said the government intends to issue orders-in-council within days to ban several rifles, including the Ruger Mini-14 used to kill 14 women at Montreal's Ecole Polytechnique.

Owners of legally purchased firearms that fall under the ban would be offered fair-market prices through a buyback program.

Prime Minister Justin Trudeau said Thursday there is a "large consensus" among Canadians who want less violence and fewer deaths from firearms.

"There is no need in Canada for guns designed to kill the largest amount of people in the shortest amount of time," he said during a news briefing on a number of issues.

"We will have more to say on this when we make an announcement around what we're doing to strengthen gun control in the coming days."

The government was almost ready to introduce measures to outlaw specific guns, including the popular AR-15 rifle, when Parliament suspended in March because of COVID-19, Trudeau said.

It also plans to empower provinces and cities to take steps to manage the storage and use of handguns within their individual jurisdictions, given that they have different concerns.

Trudeau has faced renewed questions about the pledges following the recent deadly shootings by a Nova Scotia gunman.

Public Safety Minister Bill Blair has come under pressure to move quickly on measures that do not require legislation — now even more of a factor given the severely curtailed parliamentary agenda due to the novel coronavirus.

The group PolySeSouvient, which includes students and graduates of Ecole Polytechnique, urged Blair in November to take action.

"If this was an urgent public safety issue, why did Bill Blair and the Liberal party insist on waiting until after the 2019 federal election to even contemplate seizing and destroying these guns?" the Canadian Shooting Sports Association asked last month.

The Canadian Sporting Arms and Ammunition Association tweeted Thursday the public should be concerned about "this overstepping of emergency powers" to advance an election agenda during a national crisis.

"This was one of the key planks in our election campaign, and we received a strong mandate from Canadians to act on gun control. This was our intention and it is our intention," she said.

"I felt, as someone knocking on doors during the election campaign, this is something Canadians are ready for and they want, and we are going to deliver very soon."