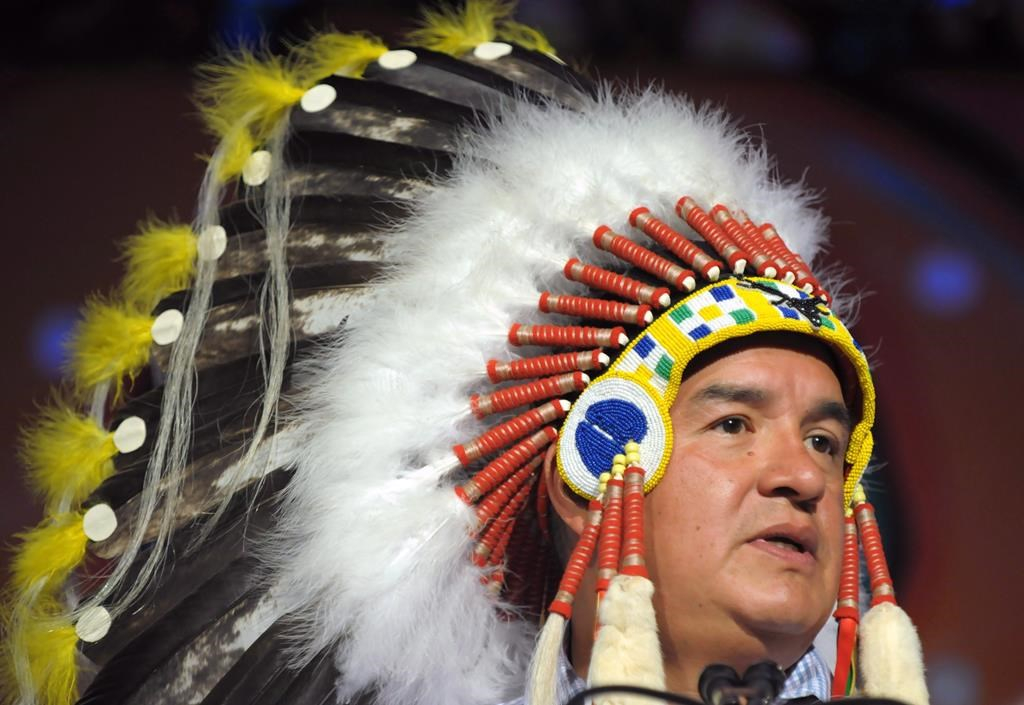 An Indigenous leader is telling the RCMP to stay off reserve land after armed officers were dispatched to break up a sacred ceremony.

"These are First Nations lands. This is Indian land. Stay off our lands unless you are invited," said Chief Bobby Cameron of the Federation of Sovereign Indigenous Nations.

Public health orders do not supersede First Nations law and treaties, asserts Cameron, who added that maintaining tradition and ceremony is even more important during the COVID-19 pandemic.

"Our ceremonies, our sun dances, our sweat lodges, our pipe ceremonies will continue and no matter what any government or what the RCMP may try to say or do, those ways are going to continue."

While powwows across the country have been cancelled, traditional ceremonies cannot be delayed, Cameron said. They cannot move online, like many church services, because they are inherently connected to the land.

Concern arose last weekend when about 35 people took part in a sun-dance ceremony organized by Clay Sutherland on the Beardy's and Okemasis Cree Nation, about 90 kilometres northeast of Saskatoon. An elder had received a vision that it was important to hold the sacred ceremony to support people during COVID-19 and to empower scientists and researchers to find a cure, Sutherland said.

A public health order in Saskatchewan limits gatherings to 10 people.

Sutherland said precautions were put in place and direction from the First Nation's leadership was followed. People coming to the ceremony from off-reserve had their temperatures checked and were advised to self-isolate for the following two weeks.

On Friday night, Sutherland was informed by the First Nation's chief that he had been contacted by the federal First Nations and Inuit Health branch and was directed to shut down the ceremony. However, Sutherland said, the chief allowed it to continue.

'Stay off our lands:' RCMP attendance at Indigenous ceremony raises ire of chief

Saskatchewan RCMP say they received two reports of a large public gathering at the First Nation on Sunday.

Sutherland said RCMP vehicles pulled up outside the lodge. Officers had their firearms on them, which are not allowed on sacred grounds, he said.

"I told them firearms and RCMP are not allowed on these grounds," he said. "I didn't want to be confrontational, basically because of RCMP, guns and the history of native people. They don't have a good history."

The officers left, but returned later and had a brief confrontation with another person, Sutherland said. No one was arrested or ticketed, but it reminded many people of the days ceremonies had to go underground, he said.

A federal ban on Indigenous ceremonies and potlatchs came into place in 1884 and lasted until the 1950s. Sutherland said Indigenous people are unwilling to go back to that time.

"I was actually willing to go to jail for my people."

RCMP Cpl. Rob King said at no time did officers ask for the ceremony to stop.

"Our focus continues to be on educating members of the public of the potential health and enforcement consequences that can result from non-compliance with the public health order," King said in an email.

Indigenous Services Canada did not responded to a request for comment.

Premier Scott Moe said he planned to get in touch with Cameron.

"The virus is indiscriminate," Moe said during a news conference Wednesday. "There are other religious and cultural gatherings that have gone to great lengths to modify their worship services."

The ceremonies are how Indigenous people heal and find strength, said Andre Bear, a ceremonial dancer and law student. He said if there were real concern for the community's health, the federal government should stop "detrimentally underfunding" health care and supplies like personal protective equipment for Aboriginal people.

Bear knows of two lodges that have decided to go underground because of what happened at Beardy's. He said any action by the federal government or RCMP against a constitutional right to ceremony is never acceptable.

"What we do for traditional healing practices and what we have been doing for thousands of years is absolutely none of their concern. We need to set that precedent right now."

This report by The Canadian Press was first published May 13, 2020

—With files from Stephanie Taylor in Regina

Interesting, isn't it? The

Interesting, isn't it? The authorities clamp down on sacred ceremonies on unceded Indigenous lands citing the danger from the COVID -19 virus. Yet they ignore the much more serious risks of the 'man camps' with 100's of men from various locations travelling back and forth from Oil and Gas infrastructure projects to their homes. How can these Infrastructure projects be deemed "essential" in these times of crashing oil and gas prices and the urgent need to reduce emissions? Not only are these activities exacerbating the existential Climate Crisis, but they will spread the epidemic to Indigenous and other local communities, as well as to and through their home communities. Is this the new 'face' of smallpox blankets?

Absolutely! And this is just

Absolutely! And this is just one more example of precious indigenous knowledge and culture that, instead of being suspicious about, we non-indigenous colonialists need to become educated about!!

RCMP intervention with guns at this sacred ceremony on unceded land is insupportable, and should have been inconceivable. Blundering orders led to fear and heartbreak for the participants-- at a place where ceremonies were being conducted for the good of all of us.
Misbegotten enterprises like this must never happen again. If weapons are needed, may the RCMP please consider their use at any of those notorious "man camps," which are associated with attacks on and and deaths of nearby native women.