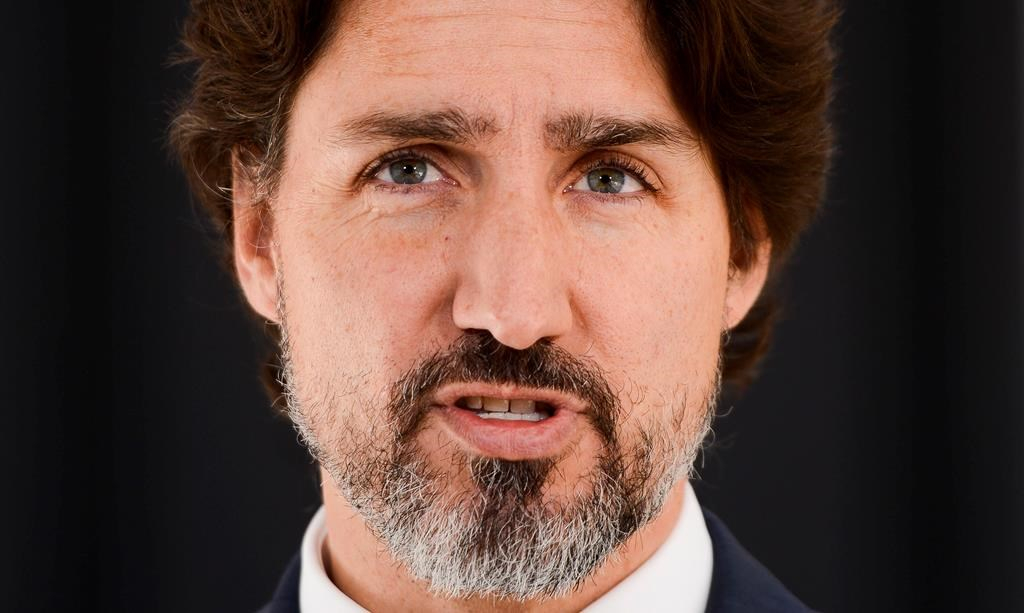 Prime Minister Justin Trudeau takes part in a press conference at Rideau Cottage during the COVID-19 pandemic in Ottawa on Wednesday, May 13, 2020. Photo by The Canadian Press/Sean Kilpatrick
Previous story
Next story

Canada is not yet prepared to confront the challenges inherent in reopening the shared border with the United States, Prime Minister Justin Trudeau said Wednesday, stopping short of confirming that a ban on non-essential travel will be extended to June 21.

The federal government has asked to extend the current ban, which is currently set to expire May 21, and a favourable response is expected from Washington — but likely won't come for a few more days, a source familiar with the ongoing discussions, but not authorized to talk about them publicly, told The Canadian Press. News of the request was first reported by the Globe and Mail.

"Right now, we're making decisions for right now," Trudeau said when asked about the possibility of keeping the border closed even after June 21, regardless of the wishes of the U.S., which is dealing with the worst COVID-19 outbreak in the world.

"Obviously, there are reflections on what next steps could be and might be in different situations and different progressions of COVID-19, but every step of the way in this unprecedented situation, we're reacting to and responding to the realities we see now, and that's where we will stay focused."

One of those realities is also the starkest: more than a million active cases in the U.S. — 42 per cent of the world's active caseload — and a death toll that was closing in Wednesday on 83,000 people, growing at a rate of more than 1,000 fatalities a day.

Another is the level of unbridled political urgency, much of it emanating from the White House and Republican-led state capitols, to reopen shuttered businesses and ease restrictions on personal mobility, often in defiance of the Trump administration's own guidelines.

Not everyone is in a hurry. In New York, home to fully one-quarter of the U.S. COVID-19 cases, Gov. Andrew Cuomo still has his foot firmly on the brake. Reopenings there will be slow, with stringent monitoring of variables like hospital admissions and diagnostic and antibody testing to ensure the virus isn't flaring back up.

"We must stay alert because we are still learning," Cuomo warned as he rattled off a list of initial beliefs about COVID-19 that proved false, including that antibodies promised immunity and that children were largely impervious.

"What we thought we knew doesn't always turn out to be true," he said. "This virus has been ahead of us every step of the way in this country."

Businesses, regional officials and other stakeholders in and around border communities are beginning to realize that their traditional model of counting on cross-border traffic may be at an end, said Laurie Trautman, director of the Border Policy Research Institute at Western Washington University in Bellingham, Wash.

"I think that's just starting to kind of hit home," Trautman said. "We're no longer just sort of waiting out the end of this, but we're actually going to need to start thinking in a whole new way."

She cited the example of Vancouver International Airport, once one of Canada's largest transborder travel hubs, which is now coming to terms with the fact that its annual passenger load was just cut in half, and likely won't recover even after travel restrictions are lifted.

"They're not weathering the storm, either. They're completely shifting to a new model."

Montana, which abuts Alberta, B.C. and Saskatchewan, has seen a steady decline in cases in recent weeks and allowed its stay-home measures to expire two weeks ago. Ohio, which shares Lake Erie with Ontario, reopened retail stores Tuesday and has allowed certain industries to resume operations. Pennsylvania, too, has begun easing restrictions, primarily in the northern regions.

In Minnesota, which borders northwest Ontario and Manitoba and currently has a total caseload of nearly 13,000 and more than 630 deaths, Gov. Tim Walz was expected to address residents Wednesday as the state's current emergency declaration and stay-at-home restrictions approach their expiry dates.

But all of it is happening before a backdrop of dread.

Rick Bright — ousted last month as head of the Biomedical Advanced Research and Development Authority after clashing with the Trump administration over the president's fondness for a now-discredited drug therapy — is expected to warn Congress on Thursday that without a national strategy, the U.S. could be facing a prolonged pandemic that will lead to more sickness, death and "the darkest winter in modern history," CNN reported.

Kathryn Friedman, a law professor at the University at Buffalo and an expert on Canada-U.S. issues, said the conversation on both sides of the border among stakeholders, local and regional leaders and members of Congress has shifted.

"People are starting to turn from stabilizing the situation to thinking about recovery, easing restrictions and opening the border," Friedman said.

For one thing, Canada and the U.S. will need to ensure their principles and regulations for lifting the restrictions were aligned, and it will be essential to ensure that regional and local leaders are in close contact.

"I think it would be very difficult if, for example, Canada had health and safety first as a guiding principle, and the U.S. was economic recovery — I think that would be a little more challenging."

B.C. Premier John Horgan and Washington Gov. Jay Inslee are in touch regularly, she noted, while Cuomo and Ontario Premier Doug Ford are not.

"There are people who are very much advocating that New York and Quebec and Ontario at least share information on the stages and how they're opening up and any concerns that they might have."

Others have recommended adding a representative from Ford's office to the task force on reopening that Cuomo established last month with fellow governors from New Jersey, Delaware, Rhode Island, Pennsylvania, Connecticut and Massachusetts.

KEEP THE BOARDER CLOSED FOR

what level of quarantining will be enforced for anyone crossing? their oral word they arent infected? NZ and Greece made mandatory gov supervised two weeks quarantine upon entry. Truck drivers are advised to not get out of their trucks and buy nothing in USA now. Do we disinfect their tires ? their load exterior when they return?
Governments seem to be falling into two categories: citizens not dying is job one and the economy will recover later. OR my friends' companies making money especially if workforce is expendable immigrants you dont care to give $ support to or care if they die like flies anyway (US, Brazil,UK)