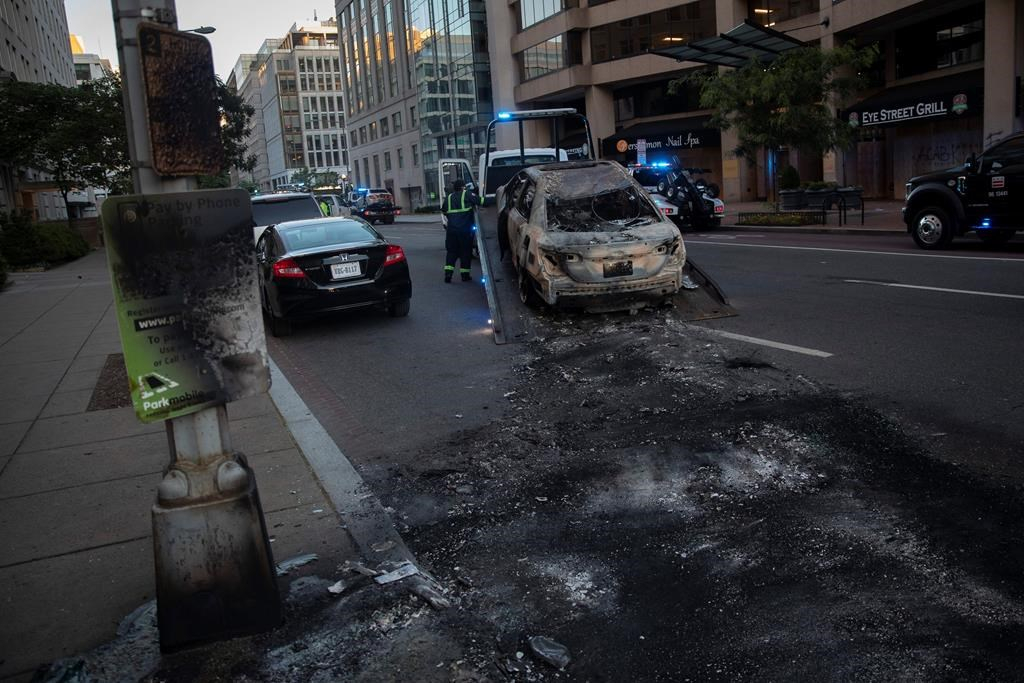 A city employee works to remove a burned out vehicle from I Street NW in Washington, on Monday, June 1, 2020, after a night of protests over the death of George Floyd. File photo by The Associated Press/Carolyn Kaster
Previous story

Americans venting their grief and anger at the death of George Floyd in police custody are being confronted nightly with tear gas, rubber bullets and truncheon-wielding, armour-clad riot police — the merciless approach they set out to protest in the first place.

It's a response not to the peaceful protests against racial injustice that have raged across the country for a full week since Floyd's death, but to the pockets of destruction — police cruisers set ablaze, rocks and bricks sailing into police lines — that some activists say risk marring the underlying call for just and equal treatment for the country's black community.

The "militarization'' of urban police forces across the U.S., as well as in major Canadian cities, is a symptom of a decades-long arms race between criminals and the cops that's been going on since the days of gangsters and Tommy guns, said Arthur Rizer, a former police officer and military lieutenant-colonel who now works at R Street Institute, a Washington think tank.

Modern police officers are well aware of the effect their methods, appearance and equipment have on public attitudes, said Rizer, who has spent the last several years surveying his former colleagues and researching their attitudes towards the evolution of their jobs and tactics.

"They know that it scares the public, and they're OK with it,'' he said.

"We have police forces around this country that are feeling like they're at war, and when you feel like you're at war, you want all the tools necessary to win that war. And I find that to be the scary part of it.''

In Washington, D.C., clashes between protesters and police in the shadow of a darkened White House are becoming a nightly feature in a part of the city usually overrun with scooter-riding tourists, strolling family members and merchants hawking T-shirts and American flags.

Tear gas and smoke from concussion grenades wafted over Lafayette Square again Monday as protesters found themselves confronting a newly aggressive police presence. That included officers on horseback and members of the National Guard — at the precise moment President Donald Trump emerged from the White House to deliver a statement in the Rose Garden.

"I am your president of law and order and an ally of all peaceful protesters, but in recent days our nation has been gripped by professional anarchists, violent mobs, arsonists, looters, criminals, rioters, antifa and others," Trump declared.

"These are not acts of peaceful protest. These are acts of domestic terror."

He promised a dramatic crackdown by mobilizing "all available federal resources, civilian and military" to enforce nightly curfews, dispatching thousands more "heavily armed soldiers" on D.C. streets, and confirmed that he had encouraged state governors and mayors to summon National Guard resources in order to "dominate the streets."

If they don't, he added, "I will deploy the United States military and quickly solve the problem for them."

Moments later, a defiant-looking president marched directly through Lafayette Square to survey the damage and to pay a photo-op visit to boarded-up St. John's Episcopal Church, a tiny historical building that caught fire Sunday. Once there, he brandished a Bible and posed for photos.

Activists, including some of Floyd's own family members, pleaded Monday for an end to the violence.

"Let's do this another way. Let's stop thinking that our voice don't matter, and vote."

Earlier in the day, Atlanta Mayor Keisha Lance Bottoms, a Democrat, made it clear during an interview on CNN that she'll take no advice from Trump, even if he is the president of the United States.

"Leaders lead, and he is not leading — he is causing further disruption to our cities," she said.

There have been displays of police compassion, as well — including footage of officers joining peaceful marches, providing solace to weeping protesters, taking a knee in a show of solidarity and paying silent tribute at Floyd's makeshift memorial.

Former Minneapolis officer Derek Chauvin, the man seen on cellphone video kneeling on Floyd's neck for nearly nine minutes, has been charged with manslaughter and third-degree murder, but activists are demanding charges against the other three officers involved.

"The most precious and valuable and powerful tool is constitutional engagement with members of the community,'' said Chicago Mayor Lori Lightfoot.

But she pointed to the almost unanimous condemnation of the actions of the police in Minneapolis, including from the law enforcement community, as a clear sign of progress that wasn't there in America 20 years ago.

"The fact that we were uniform, police and community alike, in denouncing this officer, who dishonoured and besmirched his badge — it may not feel like it, but that was a big moment that we can't forget,'' Lightfoot said.

"That to me is momentous, and I don't want to lose sight of that.''

Rizer said he doesn't believe there's a direct line between Trump's embrace of authoritarian rhetoric and the tactics that police are choosing on the streets every night to enforce the law.

What it does do, he said, is encourage those with the necessary power and influence to work all the harder on countermanding some of that influence to help ensure that marginalized Americans, including communities of colour and those in low-income neighbourhoods, aren't provoked into escalating things further.

"It's very disheartening, to be honest, because I've been working with members of his inner circle on trying to do some stuff that's good, and then this stuff just makes it so much harder,'' Rizer said.

Any honest student of

Any honest student of American History must acknowledge that the nation was founded on principles, not of life or liberty, but on principles of conquest and genocide.

The original 13 colonies were, willy nilly, built on the mercantile colonial enterprises of the European adventurers. So was Canada. Champlain was, throughout his Canadian career, funded by "investors" ranging from the Royal crown to the venture capitalists of France's merchant class. In Ontario the infamus Family Compact embodied the British Empire's colonial economy which had in common with every colonial power; extraction, asset stripping and exploitation as its core goal.

Given this structural framework - which, of course, still exists - only more so - it is inevitable that the resulting society would be layered in the age old pattern of exploiters and exploited. What the enforcers of these systems, soldiers, police, security operatives, and even politicians and bureaucrats have failed to grasp, are still failing to grasp, is that they are not the masters of the machine, but merely another tool in the hands of the exploiters.

It is especially ironic that the very people on the front lines of sustaining the exploitative structure are as much victims of the juggernaut, as those they, in turn, oppress.

Truly they are cannon fodder, bamboozled into thinking they are "serving" some ideal of law and order - when the reality is they are only employed to preserve the privilege of the upper layers of the rotten cake.

To preserve their sanity, they must justify and take on the mind set of the kleptocrats who exploit their lives as well as the lives of the underclass.

The few probative people in the praetorian guard column who are aware of their relative positions of illusory power and comfort are overwhelmed by those who have "bought in" to, and glory in, the myth of their pillars-of-society status. Mr. Chauvin is experiencing how fragile his grasp on power and control is and how unlikely it is that the superior layers of his hierarchy will support his usurpation of "life and death" privilege.