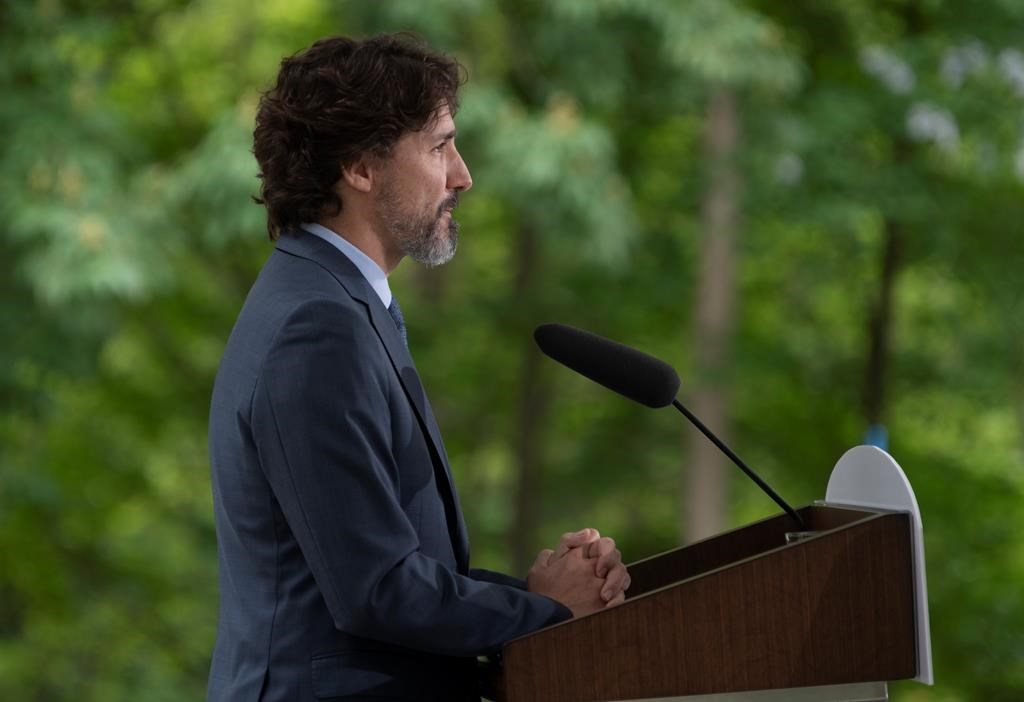 Prime Minister Justin Trudeau pauses before responding to a question on racism in the United States during a news conference outside Rideau Cottage in Ottawa, on Tuesday, June 2, 2020. Photo by The Canadian Press/Adrian Wyld
Previous story
Next story

Prime Minister Justin Trudeau waded Tuesday into the foreign policies of Israel and China, expressing concerns over separate but controversial positions that he says undermine peace in both places.

Trudeau denounced Israel's plan to annex parts of the occupied West Bank. And he said he has expressed Canada's disagreement over the proposed annexation directly to Israel's Prime Minister Benjamin Netanyahu and Benny Gantz, the country's "alternate" prime minister under a power-sharing agreement.

"I've been very direct with the Israeli leaders," Trudeau said.

"We deplore such actions, which are going to delay any prospect of lasting peace in the Middle East. So, we should be working while respecting the concept of dialogue. And we are very concerned."

Trudeau reiterated Canada's view on the conflict between Israel and the Palestinians — Canada favours a two-state solution and does not approve of "unilateral" actions by either side.

"I have highlighted both publicly and directly to Prime Minister Netanyahu and alternate prime minister Benny Gantz the importance of staying away from measures that are unilateral and our deep concerns and disagreement with their proposed policy of annexation."

Bessma Momani, a Middle East expert at the University of Waterloo, said Trudeau's comments could be viewed as a move to win support among Arab countries in Canada's bid for a temporary seat on the United Nations Security Council.

"Annexation of the West Bank is clearly an issue that most UN members disagree with and this is likely to be seen favourably by those states sill trying to gauge what kind of Canada they would get on the coveted UNSC," she said.

Adam Chapnick, a professor at the Royal Military College of Canada, said while Trudeau's comments could be viewed as a move to win support for the council bid, they are more likely an attempt to differentiate Canadian Middle East policy from U.S. President Donald Trump's.

Trump's Middle East policy is in sync with Israel's annexation plan, and has been rejected by the Palestinians.

Prime Minister Justin Trudeau waded on Tuesday, May 2, 2020, into the foreign policies of Israel and China, expressing concerns over separate but controversial positions that he says undermine peace in both places.

"One could interpret (Trudeau's) statement as a message to the international community that Canada simply does not back Washington on this issue," said Chapnick, the author of a recent book on the Security Council.

Trudeau's statement wasn't enough to sway a pro-Palestinian group in Canada that is sending letters to UN ambassadors urging them not to support Canada's Security Council campaign against Norway and Ireland.

"Today's comments by the prime minister do not change this long-standing entrenched track record of acting as an asset for Israel. Ireland and Norway have not voted against any UN resolution on support of Palestine during this century," said Karen Rodman, a spokeswoman for Just Peace Advocates, a coalition of 100 organizations and people.

Trudeau also called on China to engage constructively with the people of Hong Kong after Beijing imposed a new national security law that has fuelled widescale protests. He said Canada is concerned about its 300,000 citizens in Hong Kong "and millions of others who are fighting for justice and peace."

Canada, Britain, the United States and Australia have jointly denounced the new law as a violation of Hong Kong's freedom from Chinese communist interference.

"We will continue to stand up for peace, for dialogue, for de-escalation of tensions and for Beijing to engage constructively with the people of Hong Kong," the prime minister said.

On Monday, a Canadian legal activist called on the federal government to grant asylum to democracy activists in Hong Kong and expand settlement to those with links to Canada before China prevents them from leaving.

"Canada is a country that has always welcomed people around the world fleeing persecution and violence," Trudeau said Tuesday.

"We have a strong immigration system that looks at individual cases, looks at systemic challenges and responds to them."

"They discussed our co-ordination on responding to urgent global challenges, including the PRC's (People's Republic of China) unilateral and arbitrary decision to impose national security legislation on Hong Kong," Pompeo's spokeswoman Morgan Ortagus said on Tuesday.

The spokesman for China's foreign ministry reiterated his government's position when its conduct is criticized by other governments — he told Pompeo to butt out.

"We hope the U.S. will do more that is conducive to stability and prosperity in Hong Kong and development of China-U.S. relations."

This report by The Canadian Press was first published June 2, 2020.