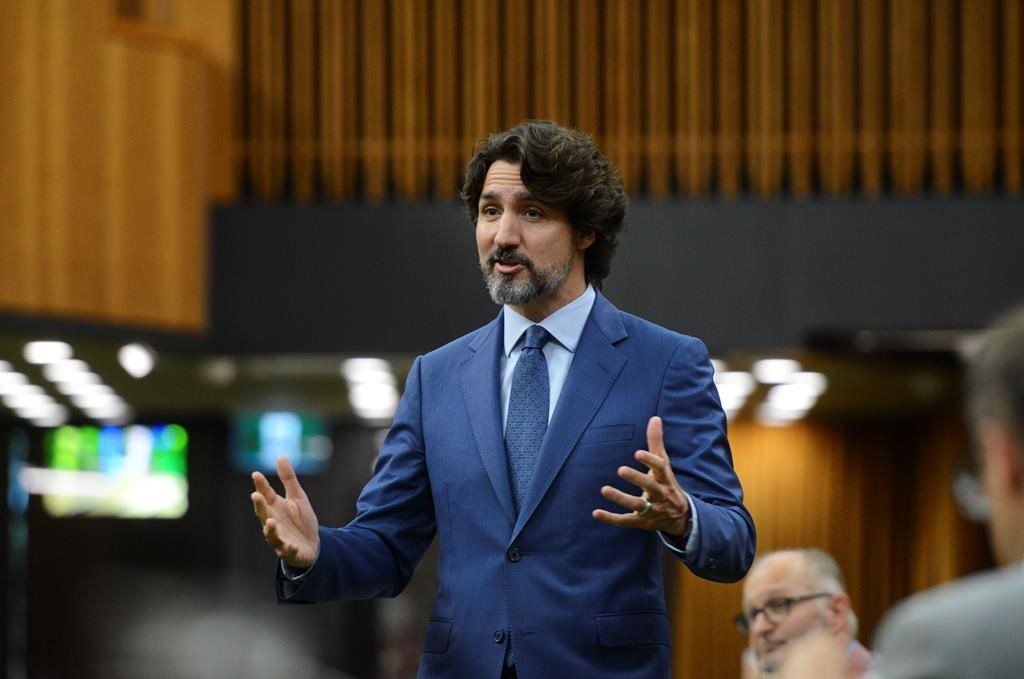 Prime Minister Justin Trudeau speaks during the special committee on the COVID-19 pandemic in the House of Commons on Parliament Hill in Ottawa on Wednesday, June 10, 2020. File photo by The Canadian Press/Sean Kilpatrick
Previous story
Next story

Prime Minister Justin Trudeau and Conservative Leader Andrew Scheer angrily traded accusations Thursday over who is to blame for blocking an emergency benefit to help Canadians with disabilities weather the COVID-19 pandemic.

Trudeau used his daily news conference to lambaste the Conservatives for refusing to give the unanimous consent necessary to swiftly pass a bill Wednesday that would have delivered on his promise of a one-time, tax-free benefit of up to $600 for people with disabilities.

The bill included a number of other measures — including controversial penalties for Canadians who fraudulently claim the Canada Emergency Response Benefit and an expansion of the wage subsidy program to cover more seasonal workers.

For a variety of reasons, some of them unrelated to the content of the legislation, no opposition party was prepared to give the unanimous consent needed to debate and approve the bill within a matter of hours.

The government then proposed splitting the bill to deal quickly with the disability benefit separately. The other opposition parties agreed but the Conservatives nixed that idea, holding out instead for a full resumption of business as usual in the House of Commons.

"Politics got in the way of actually helping Canadians," Trudeau said Thursday.

He said the government remains committed to getting the benefit to Canadians with disabilities "but it's going to be harder because opposition parties chose to play politics instead of working together."

Trudeau was particularly incensed with the Conservatives, whom he accused of holding up the benefit in a fit a pique over their failure to win enough support for their push to have the House of Commons resume normal operations. Instead, the Liberals, supported by the New Democrats, decided last month to continue with an expanded special COVID-19 committee that has served as a stand-in for the Commons.

"So, because they didn't get their way two weeks ago they continue to complain and play politics and they blocked help to Canadians with disabilities because they're still trying to argue something that they lost the debate on two weeks ago," Trudeau said of the Conservatives.

Scheer shot back later during a meeting of the special committee, accusing Trudeau of "shamefully misleading Canadians, trying to shirk responsibility for his failures in providing help for people with disabilities.

Prime Minister Justin Trudeau and Conservative Leader Andrew Scheer angrily traded accusations on Thursday, June 11, 2020, over who is to blame for blocking an emergency benefit to help Canadians with disabilities weather the COVID-19 pandemic.

"He is the one who waited months before bringing proposals forward to help people with disabilities; and then yesterday, when Conservatives proposed a motion to have Parliament meet to debate this legislation, it was Liberals who said no," Scheer said.

The Conservative motion called for the Commons resume normal sittings.

Trudeau was not in the Commons to respond but Deputy Prime Minister Chrystia Freeland suggested the Conservatives may have mistakenly blocked the disability benefit.

"The mistake yesterday was Liberals' shamefully saying no to allow Parliament to deal with that legislation and then disgustingly today trying to play petty politics on the backs of people with disabilities," Scheer retorted. "That's shameful, and Canadians won't forget it."

Freeland shot back: "What is shameful is to allow partisan politics and procedural manoeuvring to stop Canadians with disabilities who are truly facing additional challenges because of coronavirus. What is shameful and, indeed, disgusting, is to prevent those Canadians from getting that $600."

The finger pointing escalated despite a call from the chair of the Council of Canadians with Disabilities for all federal politicians to work together to help disabled Canadians weather the COVID-19 crisis.

"We are absolutely concerned that partisan politics reared just (as) some people living with disabilities might have seen relief during this pandemic," Jewelles Smith said in an email.

"We hope the parties realize that citizens with disabilities are struggling and seeking support from their government. There is a great deal of despair from those at the furthest margins right now."

Smith said she hopes the government will reconsider the parameters of the proposed benefit, which critics have said will cover just 40 per cent of Canadians with disabilities.

The benefit, along with other measures in the bill, are now in limbo.

Government House leader Pablo Rodriguez has vowed to continue negotiating with the opposition parties to try to find a resolution.

Most likely, that will involve introducing a separate bill for the disability benefit, which could be passed relatively quickly if at least one opposition party is prepared to support it and agree to limit the amount of time for debate.

The NDP has indicated it would not block the proposed benefit if it was dealt with in a stand-alone bill, even though New Democrats maintain the benefit is inadequate.

Gaining support for other measures in the bill could prove to be more difficult. The NDP is adamantly opposed to imposing fines or jail time on Canadians who fraudulently claim the CERB — despite Trudeau's assurances that the penalties are intended only for the small number who deliberately defraud the government.

This report by The Canadian Press was first published June 11, 2020.