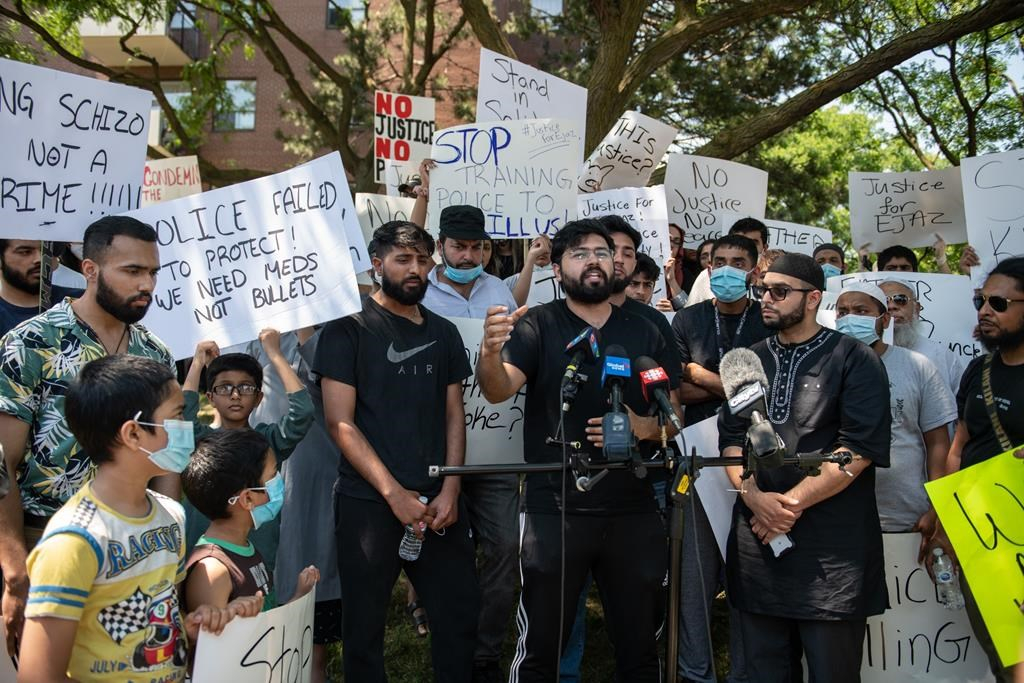 Hashim Choudhary addresses the media in front of the apartment building where his uncle, Ejaz Choudry, was shot by Peel Police and died at the scene the previous night, in Mississauga, Ont., on Sun., June 21, 2020. Photo by The Canadian Press/Galit Rodan
Previous story
Next story

The family of a 62-year-old man who died after being shot by police west of Toronto over the weekend called for a public inquiry into the death, citing a lack of faith in the province's police watchdog to conduct a fair investigation.

Hasim Choudry, the man's nephew, argued police in Mississauga, Ont., used excessive force in shooting his uncle, who he said was suffering from a schizophrenic episode and had threatened to hurt himself.

"We don't want an investigation with the police and the (Special Investigations Unit)," a visibly emotional Choudry said on Sunday. "We want a public inquiry with politicians involved to help bring this to justice. This is cruel and injustice to the limit."

The incident began at 5 p.m. on Saturday, Peel Regional Police said, when officers were called to the man's home because he was in crisis due to a medical condition for which he reportedly was not taking his medication.

Police said officers believed the man had access to weapons and entered the home after he stopped communicating, leading to an "interaction" where police fired a stun gun, plastic bullets and a gun.

The SIU has launched an investigation, and has already indentified one officer as its subject, with nine others who witnessed the shooting.

Nine investigators have been assigned to Saturday's incident, and the SIU said a police-issued firearm, a stun gun, an anti-riot gun and a knife were found at the scene.

The Muslim Council of Peel, which spoke alongside the family at a Sunday press conference, identified the deceased as Ejaz Choudry.

Family members said they asked police to allow them to try to calm their uncle down, but were told by officers to be patient.

The family also said that officers were shouting at Ejaz Choudry in English, which he didn't understand.

The family of a 62-year-old man who died after being shot by police west of Toronto over the weekend called for a public inquiry into the death, citing a lack of faith in the province's police watchdog to conduct a fair investigation.

"Anyone in distress knows that ... when anyone you know that really cares about you comes and tells you 'hey its going to be OK,' it makes a difference," said Hassan Choudry, another of his nephews. "None of us were able to go up there and say, 'uncle, you're going to be OK.'"

Family members said officers were shouting to Ejaz from the front door when they saw more officers enter the apartment from the back at around 8:30 p.m. They said they heard multiple shots ring out shortly after.

Ibrahim Hindy, president of the Muslim Council of Peel, told the press conference that police didn't do enough to de-escalate the situation.

"It's clear from everything that the family has already shared, from the eyewitness reports, from the video evidence that we have, that the senseless acts of Peel police yesterday was wildly excessive," Hindy said. "It's Father's Day and he's been robbed from being with his children."

Hindy said he had no faith in an investigation by the SIU and called on political leaders to get involved.

Later on Sunday, crowds of people marched through the streets of Mississauga to protest the police's actions. Eventually, Peel police said, they occupied an intersection near where Choudry lived, setting up tents and chairs in the street.

Choudry's death comes a month after the high-profile police-involved death of Regis Korchinski-Paquet, a Black woman who fell from her balcony and died after Toronto police responded to a mental health call.

The death prompted thousands of people to protest against racism and use of force by police in Toronto and across Canada.

The SIU continues to investigate both incidents.

Elsewhere in Canada, the police watchdog in Quebec is investigating after a 51-year-old man died during a police intervention in Montreal on Saturday.

Investigators said officers used pepper spray to subdue the man and handcuffed him after a chase, but noticed after that he'd lost consciousness and didn't have a pulse.

And in nearby Oakville, Ont., an officer was suspended this weekend in relation to an online video that appears to show a cop pushing a man to the ground.

This report by The Canadian Press was first published June 21, 2020.

This incident highlights the

This incident highlights the need for specialized personnel to deal with mental health crises. The advice to families dealing with a psychotic episode is often to call 911. But police do not always have the right training or tools. This issue is broader than a policing issue - it highlights the lack of attention to mental health issues.

The fact that the man could

The fact that the man could not understand the language being spoken would hinder all types of emergency responders!