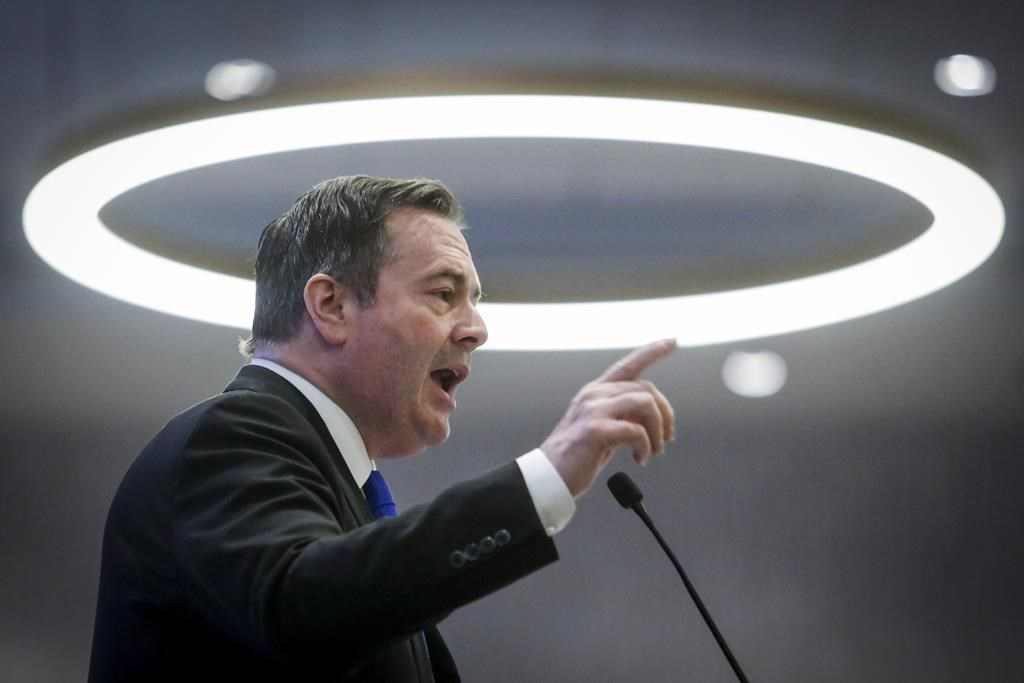 Alberta is cutting business taxes, pumping billions into infrastructure and making a full court press to lure jobs from Toronto, Montreal and elsewhere to rebound from the COVID-19 pandemic.

"We're going to be placing a huge emphasis on finance and financial technology," Kenney said Monday in Calgary.

"We're going to be telling them that they can save money for their shareholders, for their workers, for their operations by relocating financial and fin-tech jobs to places like downtown Calgary, downtown Edmonton."

Kenney said they will also target companies in other locations such as Montreal, Houston and New York as his province works to dig out of a cratered provincial economy caused by the pandemic and by a global oil price war that sent profits into a tailspin.

Alberta has flattened the curve on COVID-19 and has reopened much of its economy, albeit with health safety conditions, and Kenney said now is the time to get the economy back on its feet.

This year's budget deficit is expected to balloon from $7 billion to $20 billion.

Kenney announced an immediate $10 billion will be spent on a range of infrastructure projects, including roads, health-care facilities, and schools to create construction jobs, with spinoff benefits to other service providers.

Kenney cut the corporate income tax rate to 10 per cent from 12 per cent after taking office last year. That figure was to go down to eight per cent in the coming years, but Kenney announced it will be done this week. That makes it four percentage points lower than key competitors such as British Columbia.

Albertans already have the lowest tax regime in Canada and pay no sales tax.

Alberta is cutting business taxes, pumping billions into infrastructure and making a full court press to lure jobs from Toronto, Montreal and elsewhere to rebound from the COVID-19 pandemic.

There will also be an Innovation Employment grant to encourage high-tech companies and investment. The grant replaces tax incentives put in place by the previous NDP government, which Kenney scrapped on the grounds the incentives were too narrowly focused.

Details on this fund, and other sector-specific initiatives are expected in the coming days.

NDP Opposition Leader Rachel Notley said the $10 billion will help as a short term "shock absorber" but called Kenney's other ideas unimaginative, adding the corporate income tax cut didn't bring back jobs before the pandemic, and won't bring them back after.

"There's very little new that is in here and it proves that this government is already out of ideas," said Notley.

"The measures announced today will help business operators get back on their feet so they can begin rebuilding our economy," he said.

The plan is a marked departure from the laissez-faire economic platform Kenney championed and won on in the election. Kenney chastised then-premier Notley's NDP at the time for heavy spending on infrastructure and on day-to-day operations, saying it would cripple future generations with unsustainable debt.

Since then, as the oil and gas economy has been slow to recover, Kenney assumed a more direct interventionist approach.

In March, his government agreed to provide $1.5-billion, plus a $6-billion loan guarantee, to Calgary-based TC Energy Corporation, enabling the completion of the KXL pipeline.

Finance Minister Travis Toews said Monday that "there's good debt and bad debt." Bad debt, he said, is borrowed money for operations while good debt invests in infrastructure that in turn lures businesses to the province.

"This is an incredible ditch that we have to get through, and so it warrants a significant investment," said Toews.

This report by The Canadian Press was first published June 29, 2020

Very few workers are going to

Very few workers are going to choose to heed Kenney's siren song. Not if they've been paying attention. His attempts to revive the zombie fossil industry will fail. His "Critical Infrastructure Defence Act" is an authoritarian exercise in stifling dissent. His grab for public employee pension funds is theft. He is a product of the Stephen Harper school of disdain for democracy and science. He's ripped up the contract that governed the province's relationship with doctors. What awful austerity measures are yet to come? Who would willingly move to such a jurisdiction?

Let's not forget the huge

Let's not forget the huge environmental liability in the oil patch. Decades of conservative misrule have left us with a costly mess and no money for the cleanup.

Again, the main beneficiairies of Kenney and the Conservatives will be the wealthy and the powerful. Maybe a little bit will trickle down to the people but not much, is any. Alberta, where the rich get richer!

Here’s an idea for Alberta:

Here’s an idea for Alberta: join the rest of Canada — instead of the territories and Nunavut — and have a provincial sales tax to bring in revenue. Or is that political kryptonite?