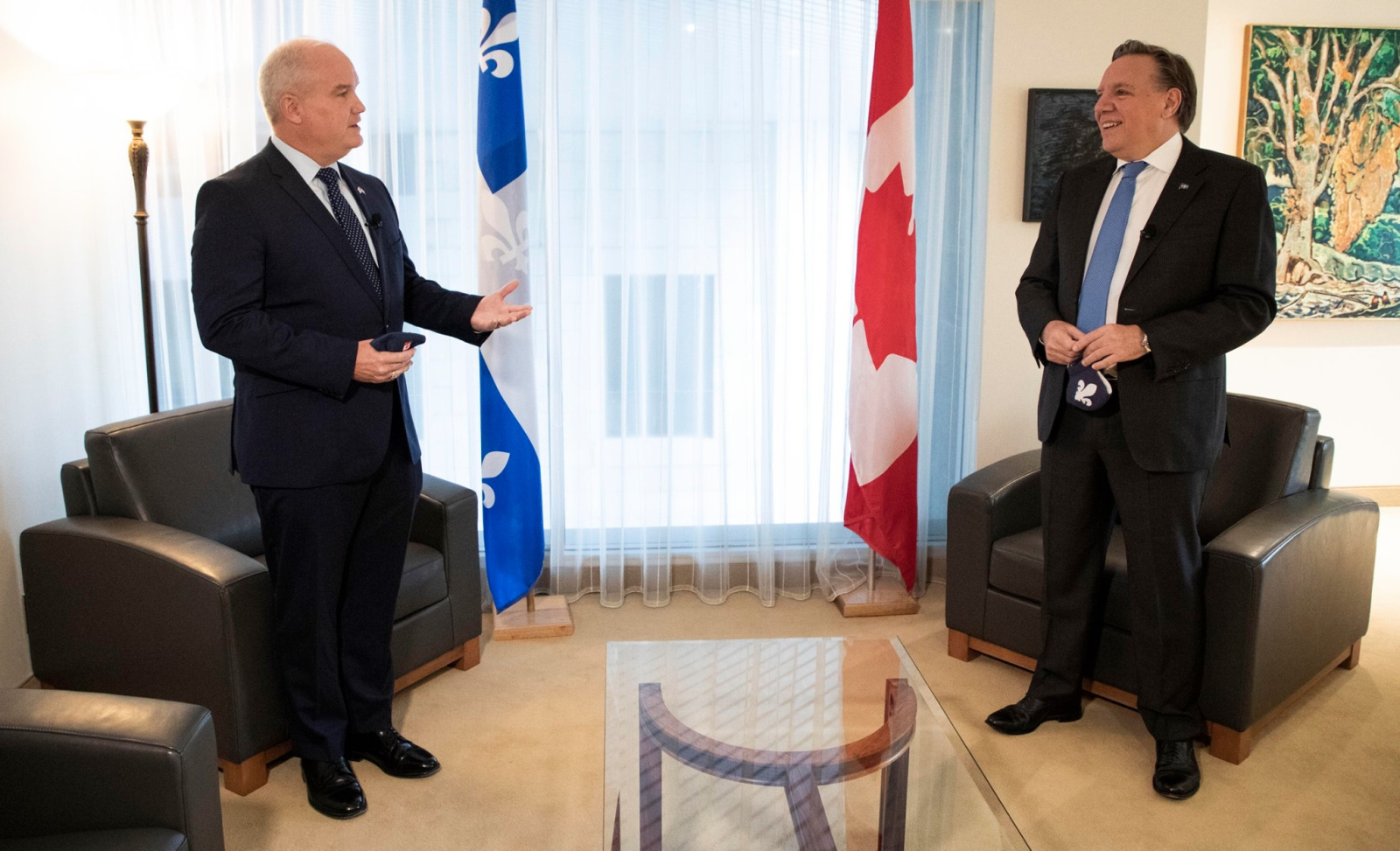 Conservative Leader Erin O’Toole meets with Quebec Premier François Legault on Sept. 14. O'Toole said he was getting tested and going into self-isolation two days later. Legault said it was a low-risk exposure and so he won't isolate. Photo CPC
Previous story

Prime Minister Justin Trudeau said Wednesday that “one of the core elements of our democracy” could be at risk just hours after Conservative Leader Erin O’Toole announced that he, his family and some of his staff would be tested for COVID-19 and self-isolating.

Trudeau was referring to the ability of parliamentarians to vote on behalf of their constituents during the upcoming session of Parliament without putting themselves, their families or their communities at risk of contracting the virus.

Word of O’Toole’s isolation came a day after the Bloc Québécois confirmed its leader, Yves-François Blanchet, as well as Bloc caucus members were self-isolating after Blanchet’s partner had tested positive.

Trudeau was asked Wednesday, at the end of a two-day cabinet retreat in Ottawa, whether the news about the party leaders had caused him to rethink the opening of the House of Commons next week.

“The challenge that we’re also moving forward with is understanding that one of the core elements of our democracy, of the privileges of individual parliamentarians, is to be able to vote for your constituents,” he said.

“It would be extremely unfair for MPs in more remote sectors, or particularly vulnerable sectors, to not be able to speak up for their constituents. And that’s why we’re going to be moving forward with a form of distance voting that will allow every parliamentarian to make sure that their community is heard as we move forward on important measures.”

O’Toole’s office said a member of his staff who was travelling with him had tested positive, and while he hadn’t shown any symptoms, he was undergoing testing anyway in order to be careful. Other staff travelling with O’Toole were getting tested and will be isolating.

“Today was going to be Jack’s first day back at school, but instead we will be getting tested and self-isolating per public health guidelines. The health and safety of my family and all Canadians is my top priority,” said the Conservative leader.

On Monday, O’Toole had made an official visit to Quebec, meeting with Premier François Legault. The two had been photographed inside with masks off.

The premier tweeted on Wednesday that he was in touch with public health authorities who told him that it was a “low-risk exposure” and that they did not recommend isolation or screening, but to monitor for symptoms.

The Bloc said Blanchet was also doing “perfectly well,” but understood the importance of physical distancing, wearing masks and washing hands. Blanchet is now in isolation and was set to undergo testing in Mauricie, Que.

PM Trudeau said Wednesday that “one of the core elements of our democracy” could be at risk, hours after Conservative Leader Erin O’Toole announced that he, his family and some of his staff would be tested for COVID-19 and self-isolating.

MPs converging on Ottawa ‘not what we want’

The throne speech, which will open the second session of the 43rd Parliament of Canada, is scheduled for Sept. 23. With one week left to go, the Liberals are negotiating with federal opposition parties over how virtual voting will be carried out.

Trudeau said he was looking forward to sitting down with opposition leaders, “mostly virtually,” to discuss priorities.

The Liberals have proposed to temporarily use video conferencing, as had been deployed in committee meetings over the last few months, and was used by the Legislative Assembly of British Columbia this summer. That would mean that only some MPs will be physically in the chamber, while others will vote virtually over video.

“Having 338 MPs converge on Ottawa from every corner of the country is probably not what we want to see from our leadership in this country,” said Trudeau on Wednesday.

Government House leader Pablo Rodríguez proposed this week that, after a period of testing, MPs could then move to electronic voting via a smartphone app that was being developed for this purpose.

A House committee recommended the app option over the summer, but opposition members have raised concerns about remote voting as well as electronic voting. The Conservatives have accused the Liberals of trying to engineer a shift towards the app, as their preferred outcome.

In addition to O’Toole, his family and staff, and Blanchet, his partner and the Bloc caucus, news broke Tuesday that a member of the security service on Parliament Hill had also tested positive.

A Parliamentary Protective Service member went to work in a building housing senators’ offices and other Parliament Hill areas for several days “before reporting a positive diagnosis,” according to a report in CTV News, which cited an email sent to senators and staff.

There are more than 200 newly confirmed COVID-19 cases in the city of Ottawa this week, and the area is one of three in Ontario, along with Toronto and Peel, where most of the recent cases have been appearing.

Ontario Premier Doug Ford’s office has signalled that it may scale back the number of people allowed together in one spot for some areas of the province soon.