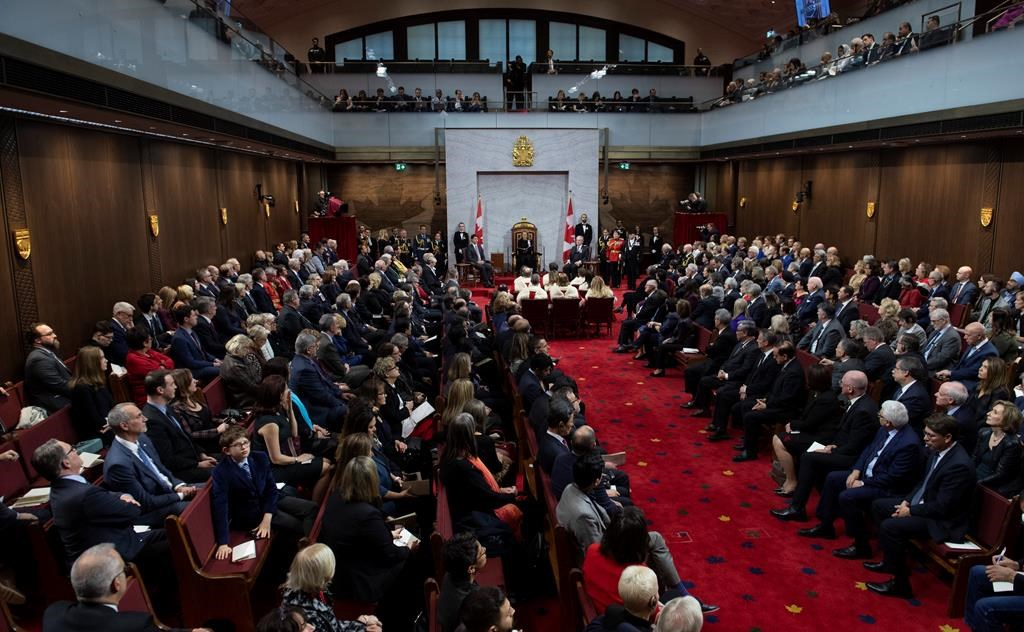 The federal Liberals' throne speech Wednesday is to lay out plans for child care, health care, affordable housing and navigating the economic fallout of the COVID-19 pandemic.

The speech, crafted by the governing party but delivered by Gov. Gen. Julie Payette, will be given in the shadow of rising COVID-19 cases across the country, prompting Prime Minister Justin Trudeau to deliver an unusual televised address of his own a few hours later.

Trudeau's own speech will deliver a message to Canadians on the "urgency of fighting COVID-19" as the country faces a second wave of the pandemic, according to his office.

Trudeau will also speak about how the Liberals plan to combat COVID-19 with government action and to build the economic recovery from pandemic-related shutdowns earlier this year, repeating elements of the throne speech.

Payette is expected to add her own commentary to the throne speech about the pandemic, which will broadly be a message of hope for Canadians in these trying times, according to a source with knowledge of the additions who wasn't authorized to speak publicly about them.

What the Liberals have told various stakeholders is to expect a two-step approach: promises of short-term help, mixed with references to a longer-term vision for the country.

For instance, sources who have knowledge of the government's thinking on child care, and spoke on the condition of anonymity to detail private conversations, said there is a much broader policy discussion behind the scenes about reforming the sector that the speech may allude to, while pledging more immediate help.

The Canadian Chamber of Commerce has asked the Liberals to establish a long-promised child care secretariat that would guide policy decisions, suggesting tax incentives for parents, guardians and daycare owners.

Martha Friendly, executive director of the Childcare Resource and Research Unit, a Toronto think-tank, says the pandemic has created a "eureka'" moment for policy-makers about the necessity of child care to the country's economic and social recovery.

"I hope there has also been the equally crucial 'aha' that the reliable, safe, high-quality child care families can count on in good times and bad depends on a transformation of government policy, not just money alone — a bold, ambitious strategy," she said.

The federal Liberals' throne speech on Wednesday, September 23, 2020, is to lay out plans for child care, health care, affordable housing and navigating the economic fallout of the COVID-19 pandemic.

Small businesses are hoping for a lifeline for companies that are barely hanging on. The Canadian Federation of Independent Business is hoping to see a rejigging of a commercial rent-assistance program that has fallen short of expectations, which the Liberals have hinted at doing.

"There are still hundreds of thousands of businesses that have received no government support at all," said CFIB president Dan Kelly, noting it could be years before business revenues return to pre-pandemic levels, even as costs remain steady.

"They're starting to fail and we've got to make sure that we can help bridge more of them to the finish line."

There's the possibility of a bold statement on homelessness and housing, which would disappoint people who want specifics.

“If it’s too broad of a statement then that’s frankly too much wiggle room," said Jeff Morrison, executive director of the Canadian Housing and Renewal Association.

Based on the signals going out, the speech will put promises into one of three buckets, said Elliot Hughes, who was an adviser to former finance minister Bill Morneau.

The first bucket will be about navigating the health crisis. Bucket 2 will be about holding up those who have had the financial floor fall from under them. Bucket 3 will be big-picture vision statements, such as national child care, pharmacare and possibly creating a guaranteed minimum income, Hughes said.

"This is the Liberals' plan for the time between now and election day," said Hughes, now with consulting firm Summa Strategies.

"The speech is really the opening salvo in what is going to be the government’s pitch to Canadians."

What will follow in October or November will be an economic update or a full-fledged budget in which Canadians will find out how big each bucket will be — and how much more public debt the Liberals will pile on.

Still, the throne speech can't be dismissed as politics and fluff, said Kathy Brock, an expert on Canada's parliamentary system from Queen's University in Kingston, Ont. The speech also tells the bureaucracy what areas will receive resources, allows opposition parties to set up their alternatives and lays the groundwork for an election.

All of which raises questions about why Trudeau wants to give a presidential-style television address shortly after instead of speaking in the House of Commons, Brock said.

“This undercuts one of the basics of our democratic system," she said.

NDP Leader Jagmeet Singh hinted again on Tuesday his party will support the speech, which would allow the minority Liberals to survive a confidence vote.

He said he wants an immediate extension of the Canada Emergency Response Benefit, and legislation for paid sick leave for all workers.

Bloc Québécois Leader Yves-François Blanchet said in a statement that he wants a pledge to immediately provide billions more to provinces in health transfers. He warned his party won't give the Liberals a blank cheque and wants its demands addressed.