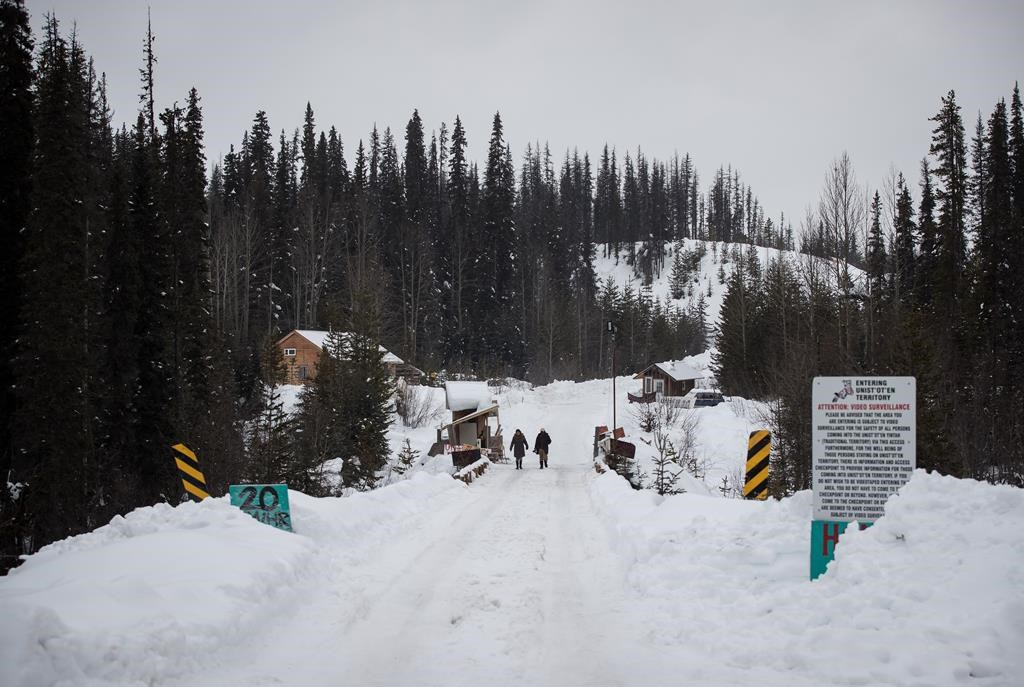 The entrance to the Unist'ot'en camp is seen on a remote logging road near Houston, B.C., on Thursday, January 17, 2019. File photo by The Canadian Press/Darryl Dyck
Previous story

Arguments over the extension of the environmental assessment certificate for a natural gas pipeline in B.C. resumed in court on Friday with lawyers for Wet'suwet'en hereditary chiefs telling a judge an evaluation is needed on the potential risk of violence to Indigenous women and girls.

Lawyers for the Office of the Wet'suwet'en are seeking an order in B.C. Supreme Court quashing the decision to extend the certificate for Coastal GasLink's 670-kilometre pipeline project, which has been the source of national protests.

They argued in part that B.C.'s Environmental Assessment Office did not meaningfully address the findings of the 2019 report from the National Inquiry into Missing and Murdered Indigenous Women and Girls when it approved the extension.

They also pointed to more than 50 instances of Coastal Gaslink's failure to adhere to existing conditions throughout last year, arguing it's not clear whether the company's track record of non-compliance was considered by the director when making the decision.

They said on Thursday the regulatory agency has the power to attach new conditions when it extends a certificate under B.C.'s Environmental Assessment Act.

Counsel for the Environmental Assessment Office disputed their interpretation of the legislation on Friday, telling the court that its executive director already has the power to amend the conditions of a certificate outside the scope of an extension application.

Karrie Wolfe also argued that quashing the extension of Coastal GasLink's certificate could leave the pipeline that's under construction in northern B.C. in a "vacuum," since the original certificate expired last October. If the decision is quashed, she said there would be no certificate to attach conditions to.

Caily DiPuma, counsel for the Office of the Wet'suwet'en, suggested an alternative remedy could be an interim injunction pausing construction until the regulator reconsiders its decision.

"The risk of violence and harm to Indigenous women and girls persists today and every day the project construction continues without a proper assessment of that harm and mitigation as necessary," she told the court on Friday.

The opposing lawyers also squared off over the scope and the meaning of records from the decision to extend the pipeline certificate.

Wolfe asserted the records show the Environmental Assessment Office and its director were handling issues of non-compliance as well as concerns over work camps for resource extraction projects in relation to gender-based harm.

DiPuma conceded the documents are part of the "universe of records" related to the decision, but said "we can't know whether they were considered by the executive director in making the decision."

On Thursday, DiPuma said the decision to grant the extension was unreasonable, arguing that the assessment office failed to assess potential gender-based harms or offer any mitigation measures.

Wolfe replied on Friday that even if the office had a duty to provide its reasons for a given decision, they do not have to be exhaustive or address every single comment or concern.

Lawyers for Coastal GasLink appeared briefly on Friday, but court was adjourned before they could fully present their positions. The hearing resumes Oct. 16.

The Office of the Wet'suwet'en is a non-profit society governed by several hereditary chiefs whose opposition to the pipeline sparked countrywide protests in February. Five elected Wet'suwet'en band councils have signed agreements with the company approving construction.