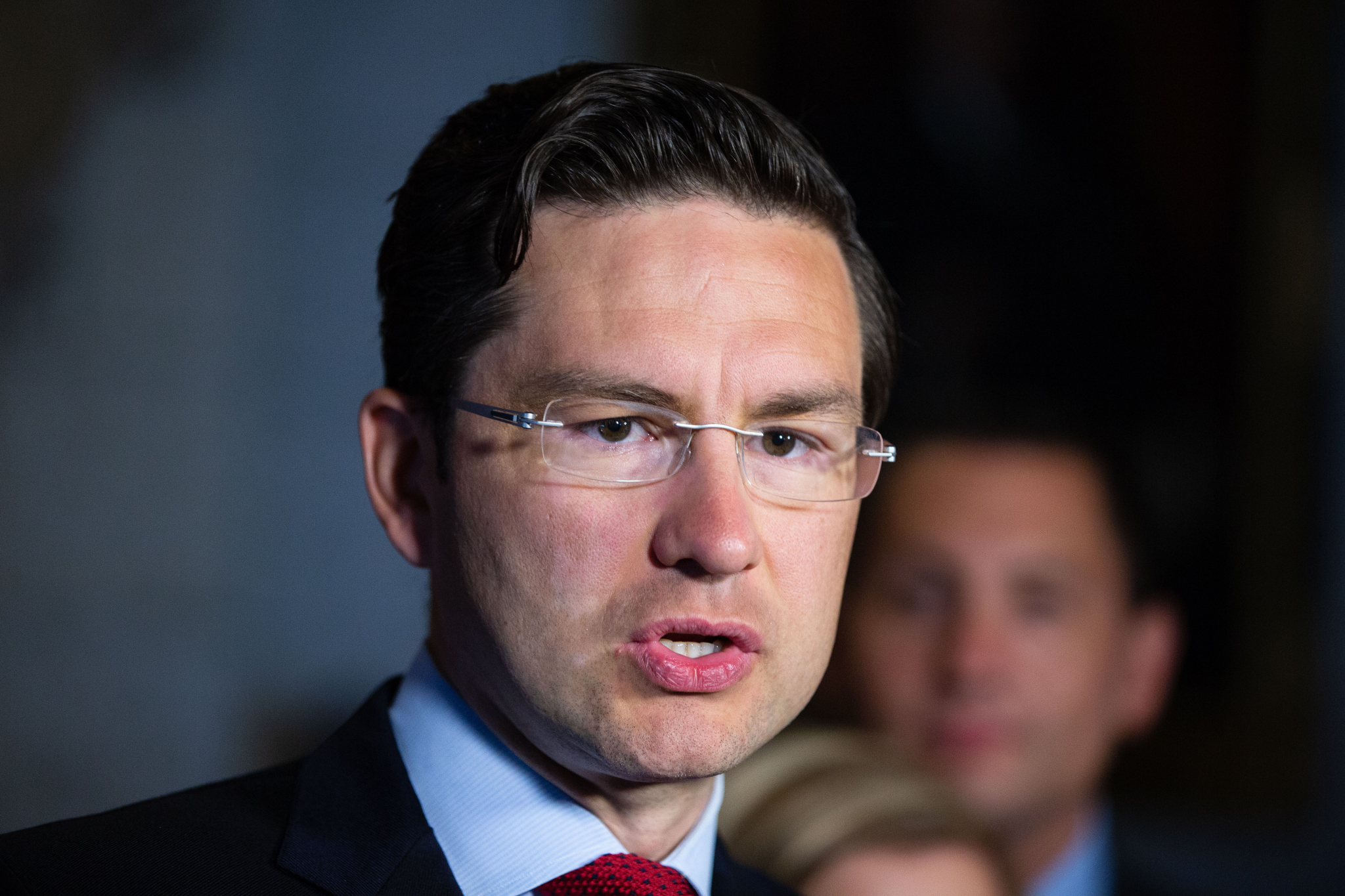 Conservative MP Pierre Poilievre pointed to the PBO's report on carbon pricing on Thursday in Question Period, saying it showed the Trudeau government was planning a 25-cent-a-litre tax on gas. File photo by Alex Tétreault
Previous story
Next story

Andrew Scheer's Opposition Conservatives have pounced on a new analysis of carbon pricing that fails to account for the escalating costs of the global climate emergency.

The analysis was prepared by Canada’s independent Parliamentary Budget Officer Yves Giroux. The watchdog defended his analysis of the carbon tax needed to achieve Canada’s Paris target, acknowledging that it did not include any non-tax measures or the cost of ignoring the climate crisis. But Giroux said it was done “for simplicity’s sake, and just for illustrative purposes.”

Giroux's report, released on Thursday, examined what would happen if the country wanted to use a nationwide carbon tax as its single, solitary tool to hit the carbon pollution reduction target it committed to as part of the Paris Agreement.

Under this scenario, Giroux found Canada would need to impose an additional $52 per tonne of carbon dioxide equivalent tax by 2030, on top of its current plan of a $50-per-tonne federal fuel charge by 2022. That would result in a combined price of $102 per tonne, or 23 cents per litre of gasoline, by 2030.

By design, he did not look at any other measures that governments could take instead to crack down on pollution over the next 11 years, even though such actions are widely used across Canada.

For example, Ottawa is regulating coal-fired power plants and methane leaks from oil and gas facilities and could tighten those further or regulate or subsidize other areas. In addition, new light-rail projects could displace more gas-powered cars, while new electric heat pumps could replace more natural gas heating.

Nor did Giroux conduct any cost-benefit analysis of whether it was worth the price to pay to reduce Canada’s pollution compared to the costs of inaction, saying that such an undertaking is beyond the resources of the office.

‘The facts are out,’ Pierre Poilievre declares

​The PBO report itself specifically indicates “the scope of this report is limited,” spelling out the two unexamined areas: “alternative approaches” to carbon pricing and “the economic and environmental costs of climate change.”

Farther down it also mentions that while “a carbon tax has been chosen as the policy instrument...any number of policies could be introduced to close the greenhouse gas emissions gap.”

Nevertheless, the Conservative Party pounced on the PBO’s findings in the daily question period in the House of Commons on Thursday, portraying these as proof that Prime Minister Justin Trudeau’s Liberal government is planning on jacking up the carbon tax to the levels cited in Giroux’s report.

“The facts are out. The Parliamentary Budget Officer says that the carbon tax would have to be 400 per cent higher than the Liberals have admitted,” said Conservative MP Pierre Poilievre. “Will the government come clean before the election, that it is planning, indeed, a 25-cent-a-litre tax on gas?”

Conservative Leader Andrew Scheer also tweeted that Giroux had “confirmed” that “Trudeau's Carbon Tax will need to go up (five times) — adding 22 cents per litre to the price of gas — for Trudeau to reach his Paris targets.”

Scheer didn't mention that other federal and provincial measures could be introduced to help Canada achieve its Paris targets, without increasing the carbon tax by five times.

Justin Trudeau’s Carbon Tax isn’t a plan to lower emissions, it’s just another cash grab. And today, the Parliamentary Budget Officer confirmed Trudeau's Carbon Tax will need to go up 5x – adding 22 cents per litre to the price of gas – for Trudeau to reach his Paris targets. pic.twitter.com/YT5rmRe4lr

The Trudeau government also announced Thursday that it would be imposing a price on carbon in Alberta in January, following the new United Conservative Party government's cancellation of its province's carbon tax.

In an interview with National Observer, Giroux said he wasn’t worried that his research would be misconstrued as implying that Canada would have no choice other than to raise its carbon tax to over $100 per tonne.

“No, I think it’s probably better than the status quo before the report, because in the absence of the report, nobody knew exactly what was necessary to meet the Paris target,” said Giroux.

“What the report says is, if there are no additional regulations or subsidies, that’s how much the price of carbon will have to go up by if we want to meet our targets. But of course, there could be a mix of regulations, subsidies and carbon pricing.”

We will stand up to this federal effort to punish Albertans for heating their homes & driving to work.

Our government will launch an immediate constitutional challenge of this federal tax grab through a judicial reference to the Alberta Court of Appeal. https://t.co/pQiWVIj7Vz

Giroux on inaction probe: 'I didn’t sign up for that'

The PBO said he did not undertake a cost-benefit analysis of the costs of inaction on climate change because the resources would be too great.

“Give me 200 very experienced analysts and two or three years,” Giroux said. “I didn’t sign up for that big of a job.”

He argued that trying to estimate the costs of climate change leads to too many unknowns, as the impacts are difficult to pinpoint.

The PBO examined the issue in the first place because all of the initiatives contained in the Trudeau government’s climate plan are collectively projected to reduce Canada’s carbon pollution to 592 Megatonnes (Mt) by 2030 — but the country’s Paris target is for 513 Mt, leaving a 79 Mt gap.

The federal government said it expects this gap will be made up with “unmodelled measures and future reductions,” which it has defined as things like “public transit,” “clean innovation,” “new technology” and “future federal, provincial and territorial measures.”

In December 2018, Environment and Climate Change Minister Catherine McKenna gave the example of her iPhone as a technology disruptor, noting it had gone from non-existent to commonplace in the span of roughly a decade.

“There are huge opportunities, and we're investing in them and we're going to figure out the way forward in a cost-effective manner,” she said at the time.

In question period on Thursday, McKenna referred to non-tax measures in response to Poilievre’s questions. “Once again, the party opposite continues to mislead Canadians,” she said. “We’re taking other measures that are not reflected in the Parliamentary Budget Officer’s report, from tackling plastic pollution, or incentives for electric vehicles.”

Giroux said his office decided to model what increasing the carbon tax as a single device to achieve the Paris target would look like, in order to “ensure that there was some analysis, or some information out there, as to what it means to close that 79 Mt gap.”

“We decided to look into that, and one potential scenario would be to increase the carbon tax, or carbon pricing and have that — for simplicity’s sake — what would it be, if it was implemented nationally, not just in the four or five backstopped provinces, but across the country from coast to coast to coast,” he said.

“And if it was the only policy instrument that the government chose to adopt — for simplicity’s sake, and just for illustrative purposes.”

Giroux said he didn’t think the carbon-tax-only scenario was unrealistic.

But, he said, “I wouldn’t say that it is necessarily the most likely scenario.” He gave an example to illustrate how governments could take other major steps: mandating that “nobody will be able to drive more than 10,000 km per year.”

That’s one way of cutting pollution, he said, though not necessarily the best way.

It is not surprising to see

It is not surprising to see these tactics by the Conservatives. The attitude for the past 40+ years of Conservatives in Alberta office have always been- put all the eggs in 1 basket 2) lack of long-term thinking and short-term unsustainable wealth for a minority while the majority is kept just happy enough until the price of oil falls down again and then it is “cuts are necessary.” But always to the average Albertan while Executives claim they are also taking a pay cut even though their pay cut still puts them nowhere near the wages of an average Albertan.

When conservatives come up

When conservatives come up with an actual actionable, realistic plan, then maybe they can whine. Maybe try working with the Liberals once in a while? Oh right, but it's all about power grabbing. Meanwhile in Alberta, Stupid To The Last Drop should be a required text in high school. Live and learn from boom bust economics, world commodity prices, one resource economies, trickle down dysfunctional economics, bankruptcy during conservative governance, and then thinking they are going to be your saviour again (for maybe 5 percent of the population).