By Morgan Sharp | Analysis, Politics, Next Gen Insider | October 13th 2020
#918 of 1501 articles from the Special Report: Coronavirus in Canada 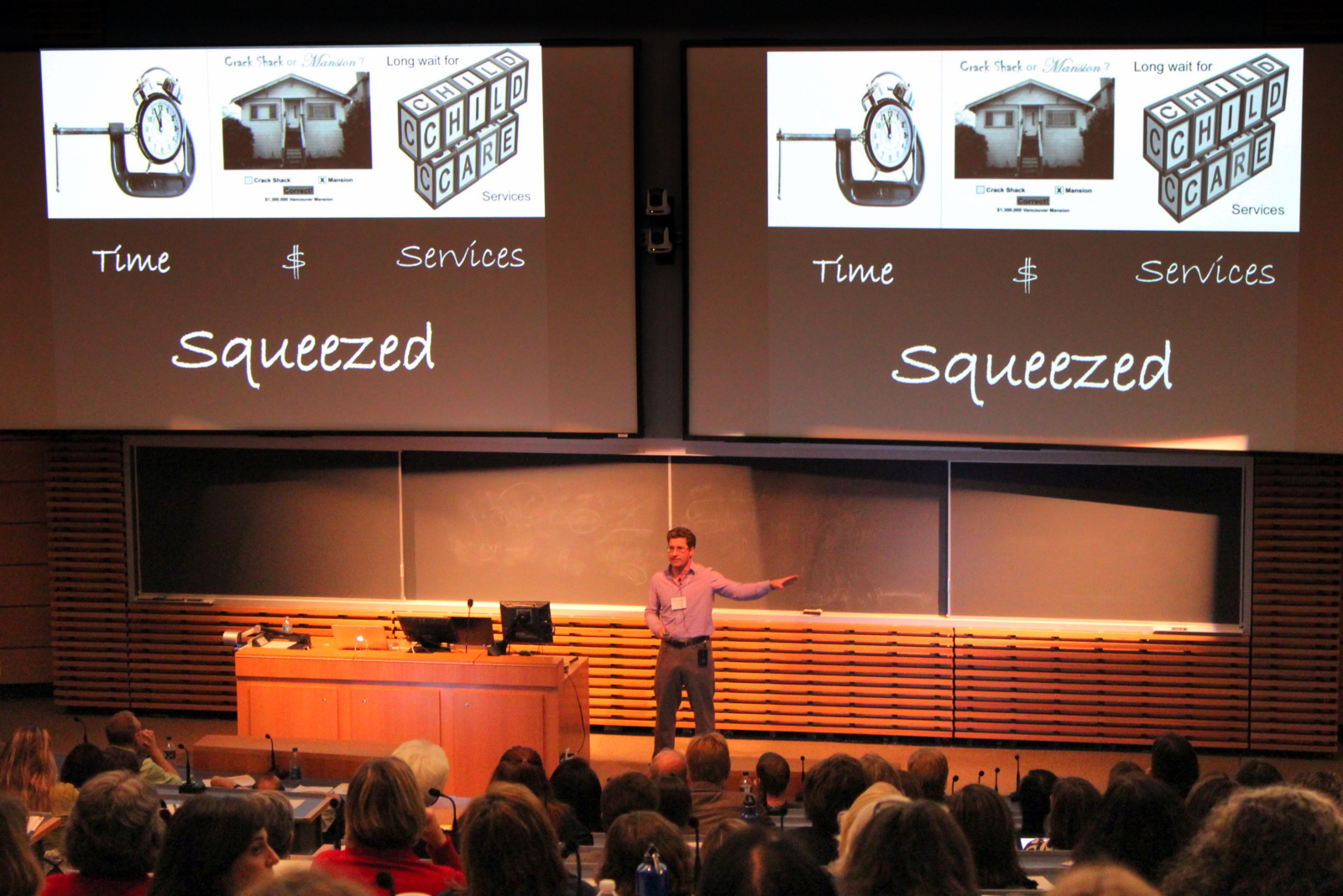 Paul Kershaw, founder of affordability advocacy group Generation Squeeze, addresses a crowd. He believes housing is “at the epicentre of generational tensions” in Canada. Photo supplied by Paul Kershaw
Previous story
Next story

Generation Squeeze’s Paul Kershaw wants Canada’s tax systems shifted to take more account of property value and other wealth, arguing that this is one way to make life more affordable for younger Canadians.

Kershaw admits it will be a tough sell to those being asked to contribute more, but argues “generational inequity” and the solidarity of the moment make it both necessary and possible.

Young people are again bracing to take the hardest hit from new public health restrictions shutting down or restricting the service work they often do in the Toronto area and Ottawa, developments that expose the age group's specific economic vulnerability as the regions grapple with rising COVID-19 cases.

“They're unable to pay their rents or their mortgages if they got into homeownership,” said Kershaw, who heads the advocacy group for younger people, calling for more affordable housing and child care.

“We really need to think through during the pandemic how ... we adapt to the insecurity that comes disproportionately to renters,” he said, pointing out that eviction halts in some provinces only postpone missing rent payments and that hurts more than interrupted mortgages.

Advocates have warned that Toronto renters are facing a “bloodbath” of evictions in the aftermath of the pandemic.

“I think we really need to be worried about that dynamic going forward,” Kershaw said.

Workers 25 and younger were already struggling more than older Canadians to regain jobs lost since the public health crisis first spiked the economy in March. That underscores the degree to which socio-economic risk has shifted to younger Canadians over recent decades, Kershaw said.

When his mother was a young woman, seniors were particularly vulnerable economically, Kershaw said, with the highest rates of low income and poverty in the country. The older generations who made up the workforce in the decades since the Second World War have gotten increasingly more comfortable as stock market returns mostly rise and bond-backed pension funds guarantee certain levels of income.

Meanwhile, younger people were already struggling to juggle rising debts and costs, along with stagnant incomes and the pandemic complicated matters even further.

Now their jobs — in retail, hospitality and other service-based industries — are more likely to put them at risk of infection or will dry up when tighter restrictions are imposed, as they were in Ontario as of midnight Saturday.

Advocacy group @GenSqueeze is calling for the tax system to account more for property value and other wealth, saying it could make life more affordable for younger Canadians.

“The pandemic has us fighting on two fronts trying to stop the spread of a virus that requires physical distancing,” said Kershaw, who is also the director of the master of public health program at the University of British Columbia.

“The virus is disproportionately harming our aging loved ones, (while) the physical distancing is in really important ways undermining the socio-economic determinants of health disproportionately for younger people,” Kershaw said.

That means COVID-19's effects on younger people are harder to pinpoint. While they can and do get seriously ill from the virus, more common challenges include increased stress and anxiety, reduced access to school and other social settings, lost income and more insecurity related to finances and housing.

“They're at their career stages where they’re disproportionately doing service work, and it's precisely those kinds of things that we are needing to close down when we think physical distancing is essential for stopping the spread of the virus.”

Housing at epicentre of inequity

The latest Statistics Canada job numbers, released on Friday, showed that the pandemic, much like the 2008 economic recession that has stunted earnings for recent graduates ever since, has been “particularly hard on young adults trying to get a foothold in the economy,” Kershaw said.

Kershaw does not endorse a universal livable income. Gen Squeeze instead focuses mostly on the high costs of housing and child care, stagnant earnings and mounting debts (including public debts like climate change), which it says are creating “generational inequity.”

He says housing is “at the epicentre of generational tensions” in Canada.

Increases in average home prices have outpaced earnings growth for young people, he said, forcing them to either take on too much debt to sustain a mortgage or keeping them tenants for longer, especially in urban areas.

The rising valuations also increase the net worth of those who owned that property earlier during the meteoric rise in prices in recent years, especially in and around Vancouver and Toronto.

Kershaw said he was somewhat hopeful in the prospect of progress being made in tackling these challenges, noting that people may have regained some of the faith society had in governments emerging from the Second World War.

“We have seen this dramatic response by governments of all political stripes intervening in our economies and in our lives to address a significant threat,” he said.

“Something might be changing in this moment,” he added. “There’s greater attention to the power imbalances that are existing in society and who's doing really important work for us.”

Gotta say I'm all for taxing

Gotta say I'm all for taxing multiple residential units held by "real estate investors" or out-and-out speculators, whether bachelor condos or family homes, and everything in between: but only to the extent that primary residences are excluded.
It's interesting that the "generational squeeze" is only acknowledged now, but not in the time of the Boomers who just didn't have those upper-income jobs available to them.
Many of us couldn't afford to finally get rid of paying rent to a landlord till we were well into middle age ... with child care basically unavailable and parents becoming old and disabled, dying of cancer, etc., just as they do now.
I'm now well into my "senior years" and still paying off the mortgage.
Young people seem to think they should be able to pop right into home ownership and start raising a family as soon as they leave post-secondary. Which brings up student loans. Most of us paid ours, without deferrals, without any consideration of income levels, etc. And I'm not suggesting at all that deferrals and write-downs, etc. shouldn't happen.
But I do want attention drawn to the fact that we are in a time of dog-in-manger real estate holdings and using residential acquisitions as rental cash-flow vehicles for people who already own their homes. This is going on all around the world. This is what's driving the whole show.
I wish them all good things, but also that the 30-something kids would get a grip, and realize that what isn't available to them wasn't available to many, if not most of us at that age, either.
The solution isn't to shift "blame" onto an entire age-cohort. It's to take a look at who the landlords are, especially of holdings that were never built-to-purpose rentals.
The pandemic, FWIW, is also squeezing the old folks: many of us haven't been able to be out-and-about for 7 months now. Many of us are now longer able to earn the small, part-time income that helped our basic pensions meet the bills.
The solutions suggested punish renters, especially poor ones, older people who actually *did* everything "right" as far as was possible for them, and are still struggling. If we took the CERB, we'd have most of it deducted from pensions over the next 2 years. And our pensions haven't increased in a year now, while as everyone knows, all the basic costs have grown in leaps and bounds.

The problem is that the greedy-guts 10%-ers (who get the best mortgage rates, have no problem qualifying, and drive up both purchase prices and rents).
I wish ppl proposing solutions would take some time to get a grip on the root source of the real problem, before just choosing who to take their frustrations out on.
And I'm no fan of universal basic income (especially in the forms the neo-cons and neo-libs are pushing ... along their pals the corporate sector ... which is basically to take away what people still living well under the poverty line "get" in order to redivide those "gets" up in equal shares for all, from disabled old women to bank executives. A guaranteed livable income is what is needed for a healthy, productive society, and it should be delivered on the basis of need and costs of the necessities of life, not as a subsidy to employers for sub-livable wages.
And no, housing subsidies isn't the way to fly. It just guarantees continuation of the status quo, in which those who deem themselves part of a "deserving class" get to revel in their do-gooding as they become the new "taker class" just as some of the "self-designated deservers" did before them.
As for child-care, I feel much the same about mandatory institutional group care as I feel about the inhumane state of long-term care homes -- which, after all, are where kids and old folks of Those Who Can't Pay get stuck.
But for anyone who feels it's the optimum choice for them, yeah, it should be available and less costly. It could be figured in as part of a Child Benefit package, which, again, needn't be a universal set rate.