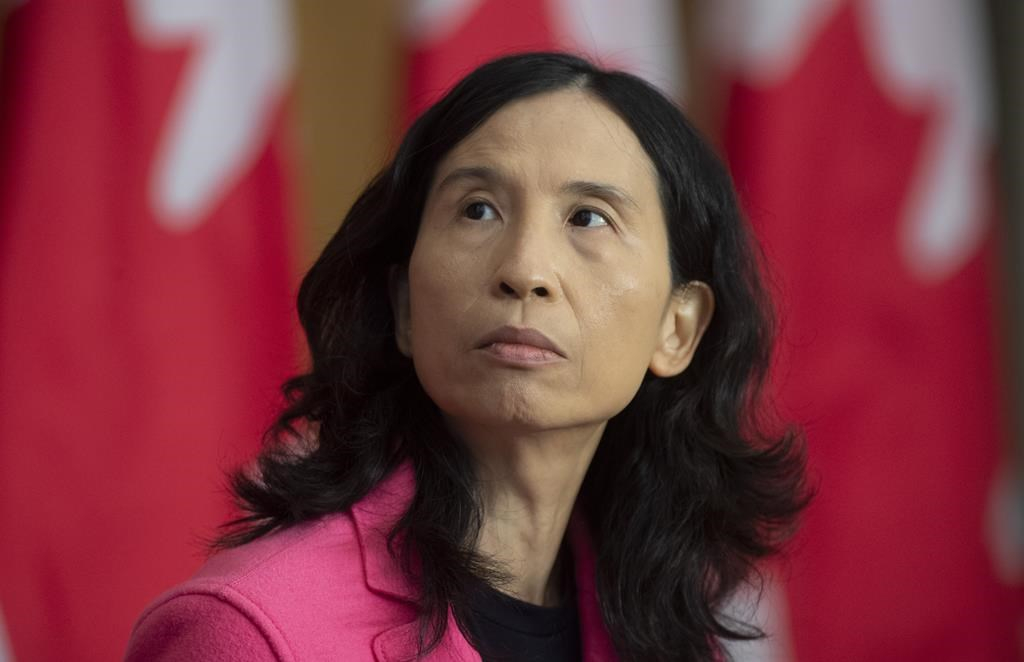 Chief Public Health Officer Theresa Tam looks at a slide projected on a screen during a news conference last week. Photo by The Canadian Press/Adrian Wyld
Previous story
Next story

Canada's chief public health officer says the spread of COVID-19 is shifting towards seniors, adding to the mounting signs suggesting a second wave could hit just as hard as the first.

In a statement Saturday, Dr. Theresa Tam said that while the summer saw cases concentrated in the 20 to 39 age range, infection rates are now accelerating in older populations.

Reports of outbreaks in long-term care centres and retirement homes have been rising in recent weeks, but seem to be more contained than the eruption of cases that overwhelmed several facilities in April and May, said Tam.

It's a troubling trend given the heightened health risks the virus poses to older Canadians, said Tam, warning that we've already seen how spread in care homes can have deadly consequences.

"We all have a shared responsibility to help protect those at highest risk," Tam said in a statement. "When spread of COVID-19 is kept to low levels in the community this decreases the risk of exposure for older Canadians."

Meanwhile, some of the hardest-hit provinces are scrambling to prevent such a worst-case scenario by introducing new restrictions to rein in the surge in regional hot spots.

Ontario reported 809 new cases on Saturday, including 358 in Toronto, 123 in the Peel Region and 94 in Ottawa.

The numbers come on the first day of the province's new measures to curb the consistent climb of cases in those areas, including closing gyms, movie theatres and casinos and suspending indoor dining at bars and restaurants.

The government also reported seven new deaths related to the virus. In total, 213 people are hospitalized in Ontario because of COVID-19; 47 people are in intensive care and 29 are on ventilators.

The picture wasn't any prettier in Quebec, which reported another 1,097 new cases on Saturday -- the sixth day out of the last seven that the province surpassed 1,000 new cases.

Quebec also reported 14 additional deaths. Hospitalizations rose by 11 to 444, and six more people were in intensive care, for a total of 73.

In response, the province was set to expand restrictions in nearly all the regions along the St. Lawrence River between Montreal and Quebec City on Saturday night.

Bars, restaurant dining rooms and gyms in so-called "red zones" must be closed, sports are limited and private citizens are not allowed to gather in private homes with anyone outside their household, with few exceptions.

The province said in its daily pandemic update on Saturday that two women in Winnipeg — one in her 80s and another in her 90s — had died since the last update on Friday.

Public health officials also reminded people that residents of personal care homes are especially vulnerable to COVID-19, and that any visits over the Thanksgiving weekend should be planned with caution.

Even the Atlantic bubble seems to have been perforated by the pandemic's second wave.

There were 20 new cases of COVID-19 in New Brunswick on Saturday, bringing the province's total number of active cases to 57.

The province's chief medical officer of health said 12 of the new cases are in the Moncton region and seven are in the Campbellton region. Both regions remain in the "orange" level of restrictions under the province's COVID-19 plan.

Newfoundland and Labrador and Nova Scotia each reported three new cases on Saturday.

This report by The Canadian Press was first published Oct. 10, 2020.

It has just recently been

It has just recently been revealed that in Ontario, Covid 19 cases in Long term care homes were refused? restricted? from hospitalization and left to die - from lack of adequate care, resources and the crudest sort of triage that condemned otherwise viable humans to premature and probably agonizing deaths.

Worst of all, it probably was an unnecessary strategy resulting in a scandalous tragedy.

One has to hope that the same thinking is not re-applied to the looming crisis and that the medical profession will resist this panic driven response.