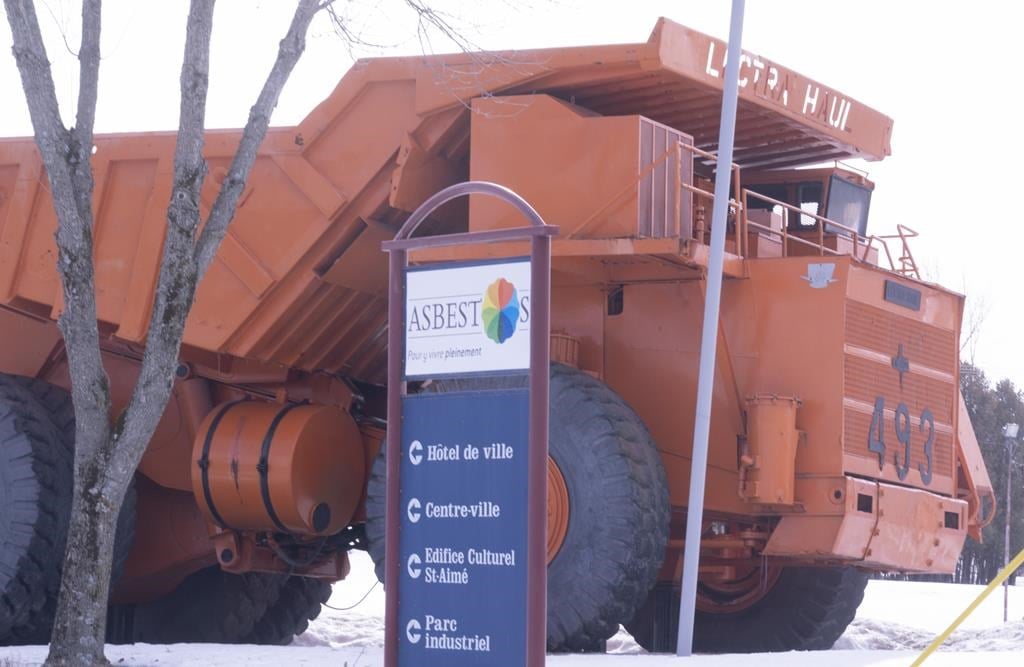 The town sign is seen in from of a mining truck in Asbestos, Que. on Wednesday, March 11, 2020. The Quebec town synonymous with the cancer-causing fibre asbestos has voted for a new name: Val-des-Sources. File photo by The Canadian Press/Paul Chiasson
Previous story
Next story

The Quebec town synonymous with the cancer-causing fibre asbestos has voted for a new name: Val-des-Sources.

During a livestreamed council meeting Monday night, Mayor Hugues Grimard announced that Val-des-Sources beat five other proposed names with 51.5 per cent of the vote after three rounds.

"It's a name that represents our area, and especially, it's inspiring for the future," he said.

The 7,000-person town of Asbestos, located about 130 km east of Montreal, had been looking to shed its association with the toxic mineral. Political and business leaders in the town complained for years the name attracted ridicule and disgust in the rest of the country and internationally.

Asbestos, Que., helped make Canada one the world's leaders in asbestos exports. The Jeffrey mine, once Canada's largest, closed in 2012.

Asbestos residents over the age of 14 and local property owners were eligible to cast their votes among six proposed names: L'Azur-des-Cantons, Jeffrey-sur-le-Lac, Larochelle, Phenix, Trois-Lacs and Val-des-Sources.

Grimard said the new name reflects "the landscape and our roots." The word "source," he said, describes how the town is located at the confluence of three lakes. And it's a symbol, he said, of what the town wants to become.

"Together, we will be the source of the development of our city."

Long used in building materials such as ceiling tiles and cement, asbestos is now banned in many countries.

The name Val-des-Sources was officially adopted by council and Grimard said it will be proposed to the provincial government for approval. He said there is no prescribed deadline for the Department of Municipal Affairs to accept or reject the proposed new name.

The Quebec town synonymous with the cancer-causing fibre asbestos has voted for a new name: Val-des-Sources. #asbestos #quebec