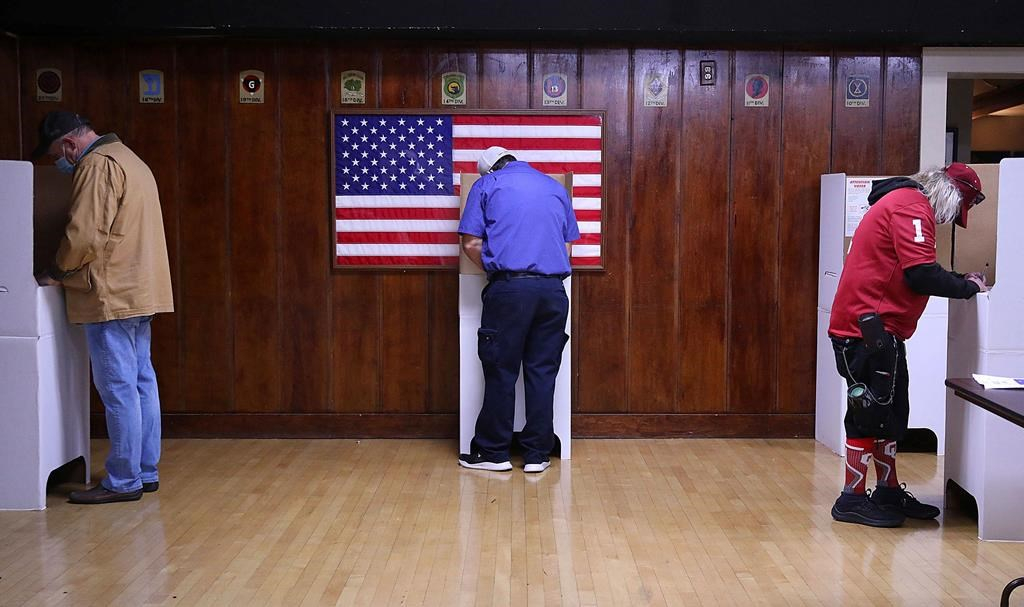 Voters fill out their ballots at American Legion Post 1 on Election Day in Tulsa, Okla. on Tuesday, Nov. 3, 2020. Photo by The Associated Press/Mike Simons/Tulsa World
Previous story
Next story

American voters — and their northern neighbours — must wait to learn whether they will be getting four more years of an inscrutable Donald Trump or beginning a new chapter with Joe Biden.

The U.S. presidential election remained unresolved Tuesday night, offering no certainty over who would occupy the foreign office most important to Canadian interests.

The cliffhanger had Canadian political observers saying it was too early to know what Canada would be facing for the next four years.

It also meant Trudeau government, as expected, withheld all comment because there was nothing definitive to comment on.

Bessma Momani, an international affairs specialist at the University of Waterloo, says Trump, who many feared would want to declare a premature victory, might expect Canada to say something.

"A big challenge for Canada now is that Trump may want to declare victory before all votes are counted and expect allies to send in their congratulations," said Momani.

"For those who don't, like Canada who will want to wait this out, Trump will take this very personally (and) be punitive on trade matters."

In the wee hours of this morning, Biden preached patience and said everyone must wait for the ballots to be counted. Not long after that, Trump essentially declared himself the winner and said he would take his fight to the U.S. Supreme Court.

Perrin Beatty, the president of the Canadian Chamber of Commerce, said uncertainty is not good.

"From a business perspective, people want to know what to expect for the next four years," he said.

"But we're simply going to have to wait."

Early Tuesday night, Biden made strong showings in Republican strongholds of Texas and Ohio. He also came out strong in Florida, a vote-rich state in the U.S. electoral college with 29 of the 270 votes needed for victory, but Trump caught up and The Associated Press declared him the winner in all three of those key states.

"It looks like we may be headed to the dreaded scenario: A close race that ends up in the courts, which gets to choose the winner," said Fen Hampson, an international affairs expert at Carleton University's Norman Paterson School of International Affairs.

"And it will breed political uncertainty, which isn't good for Americans or Canadians at a time when our economies are reeling from COVID-19."

For Americans voting in Canada, the delay was also frustrating.

Houston-born Jennifer Phillips, 30, voted by mail from Vancouver in her native Texas after moving to Canada last year.

"Americans know that issues like COVID, climate change, the global economy, require U.S. participation and leadership. So you know, what happens in America impacts the world," said Phillips.

Living in Vancouver, she says she has breathed the smoke that has drifted northward from the California wildfires.

"We need a president in office that realizes that things need to change and accept science," she said.