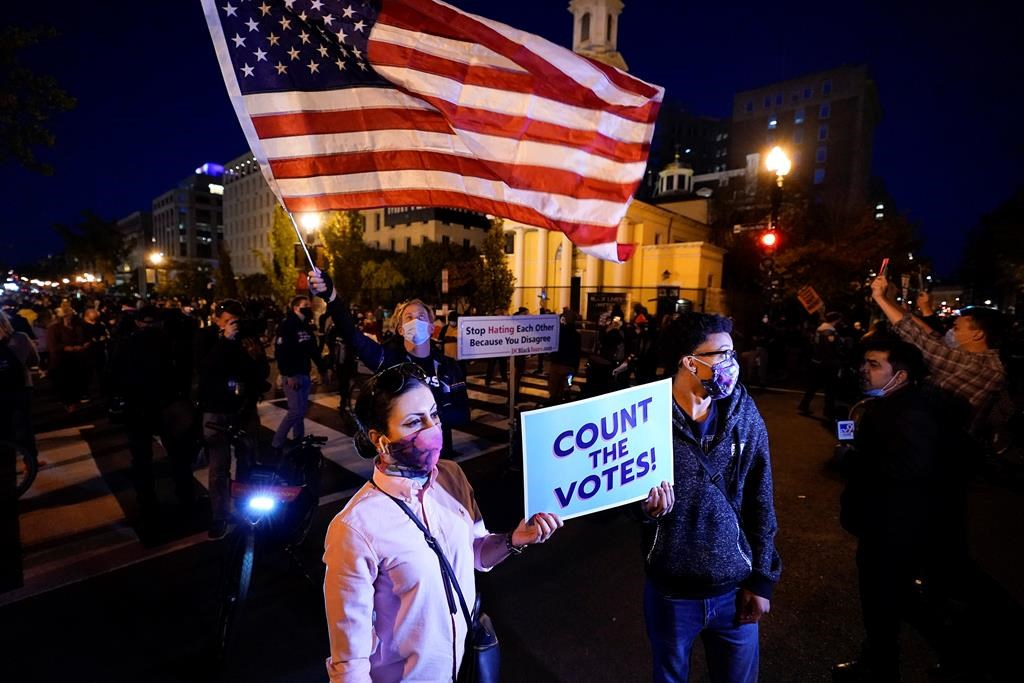 Demonstrators gather at Black Lives Matter Plaza to advocate that all votes be counted one day after Election Day, on Wednesday, Nov. 4, 2020, in Washington. File photo by The Associated Press/Alex Brandon
Previous story
Next story

With his room to manoeuvre rapidly dwindling, U.S. President Donald Trump is lashing out with threats of legal action as Joe Biden closes in on the Oval Office.

The Trump campaign is mobilizing supporters and lawyers alike in battleground states where the process of counting votes plodded late into the night Wednesday.

After claiming the 26 electoral votes in Wisconsin and Michigan, Biden was well within striking distance of the 270 electors needed to claim the presidency.

That prompted a flurry of Republican lawsuits in those two states as well as all-important Pennsylvania, where Trump supporters were expected to stage protests today.

Media reports suggest the Trump team is also considering legal action in Nevada and Arizona, two other critical pieces of the electoral puzzle.

Biden was nursing a lead of fewer than 8,000 votes in Nevada, and a three-point lead in Arizona, a significant prize that landed under Trump's name in 2016.

Both campaigns seamlessly transitioned their fundraising efforts from pre-election solicitations to asking for money to help bankroll the coming court fights.

Trump's Twitter feed was laden Wednesday with complaints that the protracted process of counting mail-in ballots amounted to an effort to stack the deck in Biden's favour.

With his room to manoeuvre rapidly dwindling, U.S. President Donald Trump is lashing out with threats of legal action as Joe Biden closes in on the Oval Office. #electionresults2020 #election2020

Many of the president's missives were flagged by Twitter as containing disputed or outright misleading election information.

Record-setting mail-in voting, which Trump has been railing against for months, made for an especially unpredictable election night. Biden has been leading the mail-in ballot count by a ratio of roughly three to one.

Anxiety about Trump's next moves lured protesters and activists to the streets outside the White House for a second straight night, fearful that the incumbent president might try to claim an unjust victory.

"It's a basic rule of elections that people should get to vote when they are eligible to vote, and that those votes should be counted," said Jessica Mason, a public policy analyst in Washington, D.C.