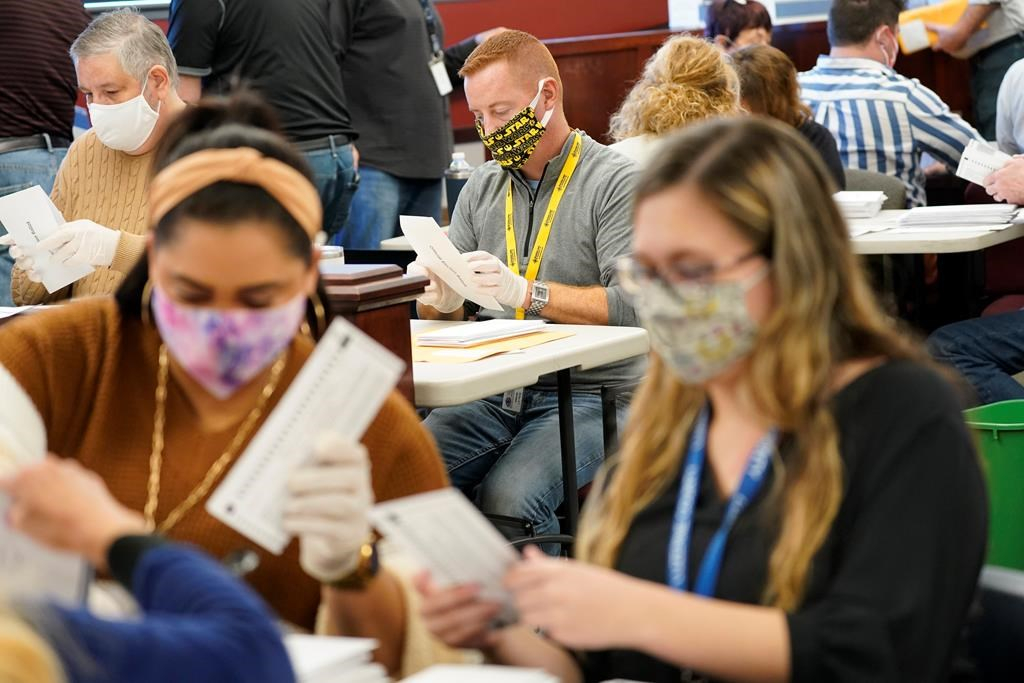 The United States could have avoided the "crippling political paralysis" it is experiencing if it had a central elections administrator like in other democracies, says an American professor who teaches in Canada.

Prof. Jason Opal of the history and classical studies department at McGill University in Montreal said he worries his country's "hyper-partisan hatred" will worsen even as millions of mail-in ballots are being counted.

Elections Canada is an example of a national agency that should have provided lessons for his country at least 20 years ago when the winner of the presidential race was undeclared for nearly three weeks, he said in an interview on Wednesday.

President Donald Trump and Democratic nominee Joe Biden have both suggested they would emerge as the victors, with Trump saying he would turn to the Supreme Court before ballots were counted in several battleground states including Pennsylvania and Michigan.

Opal said it's time for the United States to reconsider its use of the electoral college, which since 1787 has put the election of presidents in the hands of 538 electors chosen by state legislatures. Victory is based on getting at least 270 electoral college votes.

"One party perceives itself as benefiting from the electoral college or the absence of a standardized institution," said Oppal, who moved to Canada 11 years ago and cast his ballot by mail a month ago in his last home state of Maine.

He said the "U.S. is by far the outlier in Western democracies" in not having an organization like Elections Canada.

"It's kind of ironic because the U.S. is the first at this with really long democratic traditions, well preceding that of Canada. But they have not been updated, they are really showing their age. They're sclerotic and they can't handle this kind of hyper-partisan hatred."

Regardless of who wins the White House, Opal said many Americans are anxious about a system that may cast doubts on the legitimacy of the results based on states counting millions of mail-in ballots before, on, or after election day.

"That's why this is just a mess. There is no national democratic standard for how votes are counted and when they are counted," he said. "It's just hard not to imagine continued political paralysis in my home country. It really is a bad situation."

Elections Canada was established a century ago as an independent non-partisan body to administer federal elections as part of a parliamentary system that is similar to the United Kingdom, Australia and New Zealand.

The United States could have avoided the "crippling political paralysis" it is experiencing if it had a central elections administrator like in other democracies, says an American professor who teaches in Canada.

Dianna English, spokeswoman for Democrats Aboard in Canada, said even within the 50 states, local decision-making at the county level means U.S. elections become highly politicized.

"There are certainly things that states can do better. We would certainly love it if the state legislatures in many of these states like Michigan allowed the votes to be counted sooner," she said from Toronto, where she moved from New York about 18 months ago.

"Right now, I'm feeling a desire for leadership within our country to protect the process for all American voters, particularly for those of us who vote from outside the United States and need to send our ballots in by mail or fax or email for our voice to be heard."

She sent her ballot to New York by courier because of concerns about timely delivery by the U.S. Postal Service.

Mark Feigenbaum, chairman of Republicans Abroad Canada, said the election system is based on important historical precedence and he doesn't see any chance of the two major parties agreeing to change it.

At the very least, there should be a standard for accepting mail-in ballots, he said.

"I think there should be a federal law that dictates that ballots are counted based on when they're postmarked versus when they are received," said Feigenbaum, who faxed his ballot to California from Thornhill, Ont. on election day.