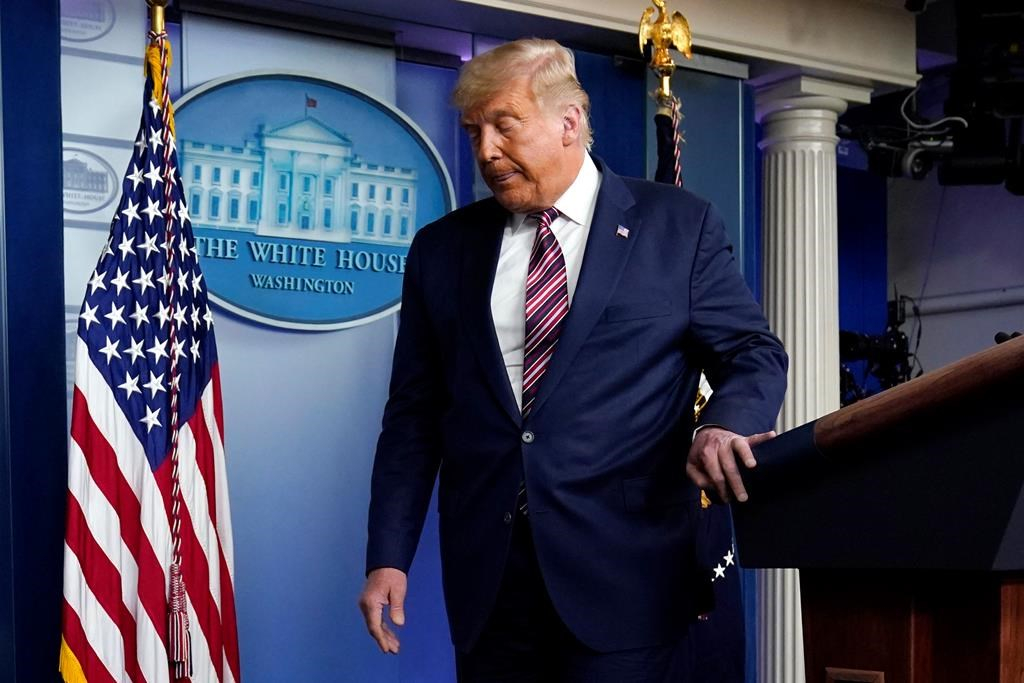 President Donald Trump leaves the podium after speaking at the White House, on Thursday, Nov. 5, 2020, in Washington. File photo by The Associated Press/Evan Vucci
Previous story
Next story

Police formed a barrier of bicycles down the middle of a busy Philadelphia street Friday, a physical manifestation of the political fault line separating euphoric Joe Biden supporters from Donald Trump's defiant and frustrated devotees.

One side of Arch Street was alive with celebration, protesters dancing with abandon to the beats of a local DJ as the Democratic nominee slowly closed in on his goal of capturing enough electoral votes to become the next president of the United States.

Across the way, a small but determined rogue's gallery of the president's true believers did their best to shout down the other side, brandishing Trump flags and placards as they parroted his unfounded claims of electoral fraud.

As night fell, the crowd swelled, mostly on the pro-Biden side, as the vibe switched from earnest political activism to all-night Halloween dance party. Small children bounced on the shoulders of parents.

One group of constumed celebrants showed up dressed as mailboxes, presumably to drive home the validity of mail-in ballots. Several renditions of Gritty, the beloved Philadelphia Flyers mascot, bounced through the throng.

Passersby posed for selfies in front of a massive canvas replica of the preamble of the U.S. Constitution, some pausing to sign their names. Others simply extended middle fingers in the direction of the Trump camp.

On the other side, where a sound system tried to drown out the groove with classic-rock staples from Trump's preferred playlist, the president's backers brooded.

"They're trying to steal an election," said Dave Dohrmann, a Philadelphia native who was among the Trump supporters pacing back and forth behind the barriers.

Helicopters pulsed in the sky overhead and police sirens howled in the distance as Trump supporters bellowed vitriol into bullhorns, ignored by the priests and local activists offering affirmations and prayers across the street.

In the neutral territory in between, locals occasionally wandered over to the Trump barriers to taunt and antagonize, encounters that typically dissolved into shouting matches but little else.

Dohrmann, for one, said he doesn't expect the dispute to escalate any further.

"Trump supporters are not violent people," he insisted, straining to be heard over the shouted epithets of a nearby ally. "There's a large, welcoming tent that everyone is welcome into for the common goal of keeping our democracy."

Meanwhile, the country's electoral will was gradually coming into focus in Georgia and Pennsylvania, two critical battleground states that appeared poised to seal the current president's fate.

In Georgia, a state where only Jimmy Carter and Bill Clinton have disturbed a half-century of Republican dominance, Trump's paper-thin lead disappeared overnight beneath a tide of mail-in votes for the Democratic nominee.

And in Pennsylvania, Biden gradually erased what had been a 600,000-vote lead for Trump on election night, posting a lead of more than 17,000 votes as the supper hour passed.

Biden was expected to deliver a prime-time address Friday along with vice-presidential nominee Kamala Harris , but it was unclear if he intended to declare himself the victor.

Trump, desperate to stop the counting process in states where he's losing, continued to lash out from inside the White House.

"Joe Biden should not wrongfully claim the office of the president," he fumed on Twitter. "I could make that claim also. Legal proceedings are just now beginning!"

Dasha Pruett, who ran unsuccessfully as a Republican in Pennsylvania's 5th congressional district, said she fears tension could turn to violence across the country should Biden win.

"It's very possible that this is going to go in a very bad direction," Pruett said.

Pennsylvania is worth 20 electoral college votes and Georgia is worth 16. All of them are must-haves for Trump, who is well back of Biden in the race to reach the 270 needed to claim the presidency.

Pennsylvania's votes, added to those of states where he has clear leads, would put Biden over the top.

But in Arizona, where the president is lagging behind Biden but has a reasonable chance to catch him and claim 11 electoral votes, the Trump forces are more than happy to let the counting continue.

With his path back to the Oval Office narrowing by the hour, Trump has been mobilizing supporters and lawyers alike in the remaining battleground states, including in Pennsylvania, in a last-ditch attempt to keep his hopes alive.

Trump's campaign has also blanketed places like Wisconsin and Michigan with a flurry of legal challenges, most of them with little chance to gain traction.

The Associated Press has Biden with 264 electoral college votes, although several other major media outlets have yet to call Arizona. Nevada, too, where Biden was leading, remained up in the air, while Trump was ahead substantially in North Carolina.

Both campaigns, meanwhile, have moved their fundraising efforts from pre-election solicitations to asking for money to help bankroll the coming court fights.