To cut Trump off or let him rant: That is the quandary facing broadcasters 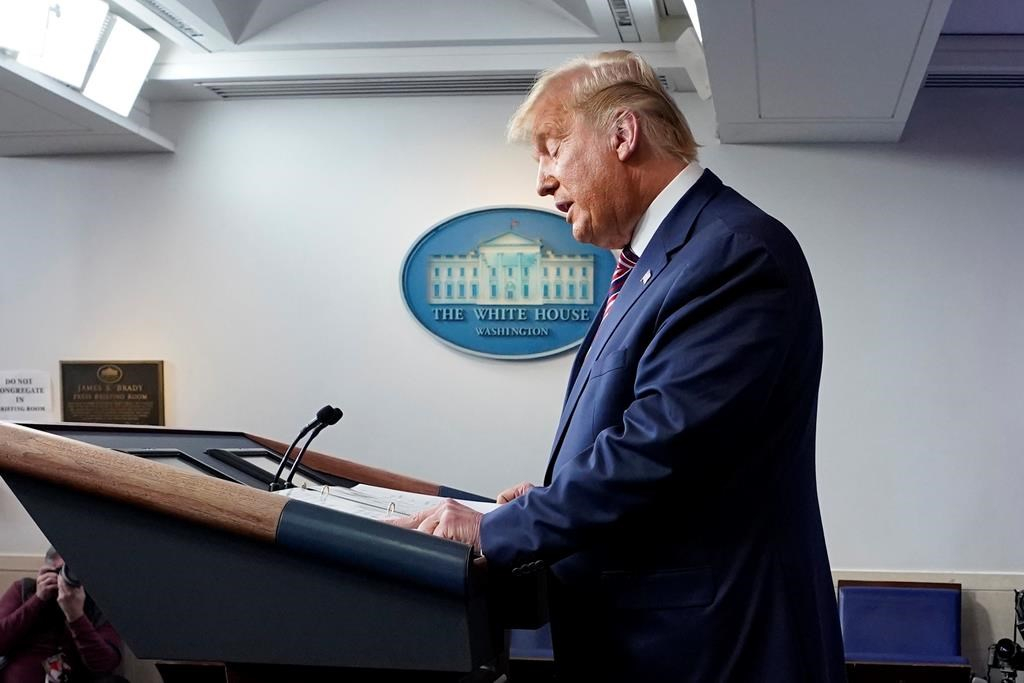 President Donald Trump speaks at the White House, on Thursday, Nov. 5, 2020, in Washington. Photo by The Associated Press/Evan Vucci
Previous story
Next story

Deciding on the fly whether to air in real time U.S. President Donald Trump's baseless allegations of election fraud is a tricky dilemma that defies easy solutions, broadcast journalists and observers said on Friday.

Differing approaches were apparent on Thursday, when some networks simply cut away from covering Trump's invective from the White House, while others stayed with his statements but offered real-time disclaimers.

CNN and Fox, for example, opted for the latter approach as did CBC News and CTV News Channel.

"It ain't easy. These are really tough decisions to make in the moment," Brodie Fenlon, CBC's editor-in-chief, said in an interview. "You have a guy who is still the president and at a moment when he is still potentially competitive, and his words matter as we see and they still have an effect on the ground."

As Trump spoke, CBC called him out in real time with banners underneath such as: "Without evidence, Trump again claims voter fraud" and "Trump has falsely claimed mail-in ballot voter fraud for months."

In the U.S., the main networks, which were in the middle of their evening newscasts, abruptly cut away from Trump.

“We have to interrupt here, because the president has made a number of false statements, including the notion that there has been fraudulent voting,” NBC's Lester Holt said. “There has been no evidence of that.”

Fredericton-based media ethicist and author Stephen Ward said cutting off Trump was the right approach. The media, he said, have been slow to respond to the challenge the president poses with his propensity for outright lying.

"To allow him to abuse his power to spread lies and claims without evidence at this sensitive time for American democracy," Ward said, "is to fail to adopt journalism’s primary political value: to promote evidence-based and informed views about major events, and to limit the impact of people who wish to spread lies, fear, or misinformation."

The media should give Trump some coverage regarding his views on the vote, Ward said, but they should also not hesitate to cut away if it becomes clear that he's simply manipulating the media and making claims that have no factual basis.

When POTUS falsely declares election fraud, should broadcasters let him rant or cut him off. #USelection2020 #POTUS45 #rant

"The media should have been treating Trump in this critical manner a long time ago," Ward said. "Journalism should not be in the business of disseminating misinformation for private and political gain, even if the speaker is the president."

That Trump is the president is precisely what makes the question of giving him a platform so tricky, said Mark Bulgutch, a former senior executive producer with CBC television news and veteran of political coverage. Bulgutch, who was watching CNN, noted the differing approaches and said he was torn about the right one.

Still, as an adult viewer, Bulgutch wanted to see what Trump had to say at a historic time. Even with immediate descriptions of what the president had said and why he had been cut off, viewers might wonder why they couldn't have seen for themselves and what the media were hiding.

Lisa LaFlamme, chief anchor and senior editor with CTV National News, said she agreed with the decision of the American networks to take the unprecedented decision to cut him off.

"Your credibility is everything and you can't really fact-check in real time properly," LaFlamme said. "He is gaslighting American democracy from inside the White House and I don't really think they had a choice."

At the same time, LaFlamme said CTV News Channel was right to stay with Trump but run disclaimer banners.

With it looking increasingly likely that Democrat challenger Joe Biden will become president-elect, questions about how to cover a flailing Trump will persist. All seem to agree, however, that fact-checking and calling out his lies is imperative.

"We do take it seriously. We're going to adjust based on how events unfold," Fenlon said.