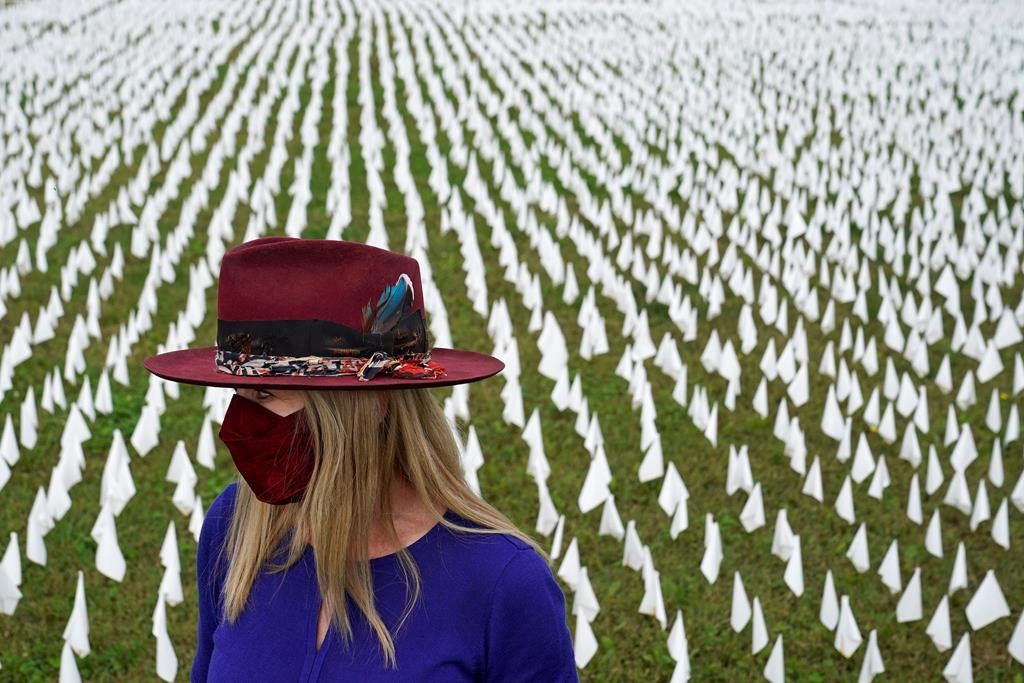 Artist Suzanne Brennan Firstenberg stands among thousands of white flags planted in remembrance of Americans who have died of COVID-19, on Oct. 27, 2020, near Robert F. Kennedy Memorial Stadium in Washington. File photo by AP/Patrick Sem
Previous story
Next story

Every day, Suzanne Brennan Firstenberg joins the countless ranks of U.S. commuters still making their way to work in the national capital.

In the city where she once worked as a Senate aide, however, Firstenberg's current job is more of an artist's odyssey: an open-air installation that pays silent, wind-whipped tribute to the American victims of COVID-19.

Blocks from her former workplace on Capitol Hill, the sculptor and visual artist tends daily to a field of tiny white flags — 247,356 of them, at last count — and a billboard that displays a running tally of the pandemic's death toll.

Nine months into the crisis, Firstenberg is as busy as she's ever been.

"When we update the numbers, that's the worst time of the day for me, because that makes it real," she says, a fierce squall snapping the flags at her feet.

"It goes through my mind: 'How many more flags do I have to buy? How many more deaths are going to happen? When is someone going to take charge and really do something on a serious national level?'"

In a year of firsts, just as an embattled electorate hopes against hope for a break in the political tumult, COVID-19 is again rattling America's windows.

New cases and hospitalizations are setting daily records across the United States, blowing past levels reached in the spring. Mayors and governors are imposing fresh restrictions on bars, restaurants and fitness centres.

According to the COVID Tracking Project, one in every 378 Americans tested positive last week. Cases were up 41 per cent, while hospitalizations push the health-care system to the breaking point. The seven-day average death toll is now more than 1,000 a day.

As the election drama recedes, the COVID-19 crisis explodes in US. #Covid19 #USelection2020 #Covid_19

"Hospitalizations have broken the previous national record and are rising very quickly in every U.S. region, something we’ve never seen before," the project's organizers wrote in their weekly blog.

"In fact, hospitalizations are now rising more quickly than we’ve ever seen, outside of a brief period in late March. The past three days have seen increases larger than any single day since mid-April."

The state of the crisis in both the U.S. and Canada suggests the restrictions on non-essential travel between the two countries, currently set to expire Friday, won't be going away anytime soon.

"I don't anticipate that we're going to see any major changes at the next rollover," Canada's U.S. ambassador Kirsten Hillman said in an interview last week.

"We are always monitoring to make sure that the policy is operating as it's intended to, and it is."

"All Canadians should avoid international travel," he said. "The pandemic continues to cause significant challenges around the world, including in the southern United States, and people are safest when they stay home in Canada."

Just a week out from the Thanksgiving holiday and the country's busiest travel season, U.S. health officials are pleading with people to take the threat seriously.

Dr. Anthony Fauci, the country's pre-eminent infectious-disease expert, acknowledged Tuesday that another national shutdown is not in the cards.

And he warned that recent good news in the race to produce a vaccine — clinical trials by both Moderna and Pfizer are showing positive results in more than 90 per cent of cases — shouldn't lead to complacency.

"A vaccine should not have you then make a decision, 'Well, we're going to have a vaccine so we don't have to do anything else,'" he said.

"No. The fact that we have a vaccine coming means we should double down and hang in there because help is on the way."

Help for president-elect Joe Biden, meanwhile, is most definitely not coming from the White House.

U.S. President Donald Trump, still fixated on his conspiracy-minded effort to undermine the results of the Nov. 3 election, is stonewalling his successor's efforts to prepare for power and put a vaccine-deployment strategy in place.

Firstenberg, for one, is bracing for just that.

Her fiercest hope is that the project — "In America," it's officially called — will prompt people to rethink their values.

"Some of us want to wrap ourselves in the American flag, and just demand our individual rights above all else. But in reality, seeing what happens, maybe it's time to rethink that," Firstenberg said.

"If we don't rethink things, will continue to be the greatest — but in a way that we don't want."