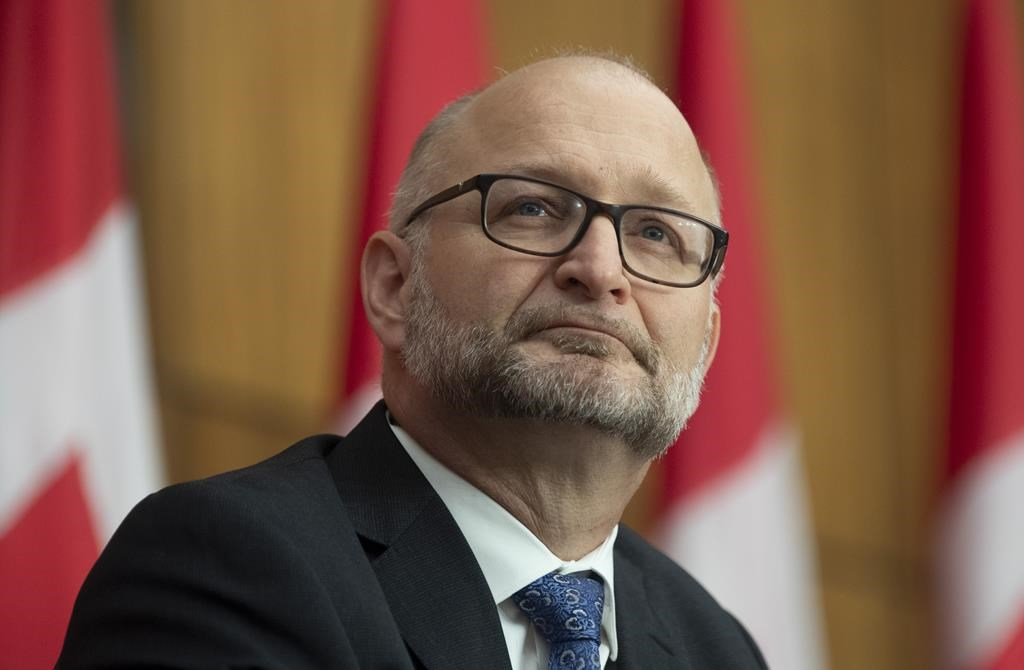 Justice Minister David Lametti is seen during a news conference in Ottawa, on Thursday, November 26, 2020. Photo by The Canadian Press/Adrian Wyld
Previous story

A Quebec judge has granted the federal government another delay in bringing medical assistance in dying legislation in line with a ruling from the province's Superior Court.

This time around, Ottawa asked for — and received — until Feb. 26, a deadline that gives Parliament just over two more months to pass legislation that would expand access to doctor-assisted death in Quebec and the rest of Canada.

The move comes as the government's representative in the Senate, Sen. Marc Gold, conceded Thursday the upper house won't finish its consideration of Bill C-7 until mid-February — long past the previous court-imposed deadline that was set to expire Friday.

Senators wrapped up opening debate on the bill Thursday, but it must now be scrutinized by the Senate's legal and constitutional affairs committee before being sent back to the chamber for final debate and possible amendments.

In a statement, Gold said he had hoped the Senate could finish dealing with the bill before the previous deadline.

"Because the Senate received the bill so late in the calendar, fast-tracking Bill C-7 through all stages by December 18 would have required the unanimous consent of all senators,'' he said.

"But given the significance of this legislation, senators have expressed a legitimate desire to fulfil their constitutional role of sober second thought."

The bill is intended to bring the law into compliance with a September 2019 court ruling. Quebec Superior Court Justice Christine Baudouin struck down a provision in the law that allows medically assisted death only for those whose natural death is reasonably foreseeable.

She gave the government six months to bring the law into compliance with her ruling, but the court later agreed to two extensions, given the disruptions to Parliament caused by last fall's election and the COVID-19 pandemic.

A Quebec judge has given the federal government until late Feb. too bring medical assistance in dying legislation in line with a Superior Court ruling. #MAID #cdnpoli #cdnlegal #AssistedDying

A similar provision in the Quebec law was dropped ahead of the initial March deadline.

The federal government once again pointed to the COVID-19 pandemic, which slowed the work of Parliament, to justify its latest request.

The delay in implementing the court ruling has meant those who are not near death still cannot directly request the help of a doctor to end their life.

They could go to court to be individually authorized to obtain medical assistance in dying, a possibility that Baudouin gave in her judgment last fall, but it means they must pay the associated legal costs.

Sheehan asked federal lawyer David Lucas on Thursday morning if the government had anything to offer to ease the burden on these people, such as by reimbursing their legal costs.

Asked about the matter later Thursday, before the ruling was out, federal Justice Minister David Lametti said the government would pay lawyers' fees and reasonable court expenses for those who would have to head to court to seek such permission.

This commitment is included in Sheehan's decision.

Conservative justice critic Rob Moore said the federal government should have appealed the Quebec court decision last fall instead of trying to rush through the changes now.

“By refusing to appeal the court decision, then proroguing Parliament and stalling on the reintroduction of C-7, the Liberals have failed to meet their target. In their arrogance, the Liberals expected Parliament to simply rubber-stamp this bill on life-and-death," he said in a statement Thursday.

He added the Conservatives have put forward amendments he said would have dealt with concerns raised by people living with disabilities.

"We will continue to advocate for changes to protect the vulnerable in Canada," he said.

Lametti responded to the decision Thursday night on Twitter, saying he was pleased the Quebec Superior Court granted the extension but it should never have been needed.

"The Conservatives' delay tactics in the House left the Senate with little time to review the legislation before the previous deadline," he said.

"Real people are suffering. Our focus remains the same — we will keep doing everything in our power to pass this critical bill."

This report by The Canadian Press was first published Dec. 17, 2020.