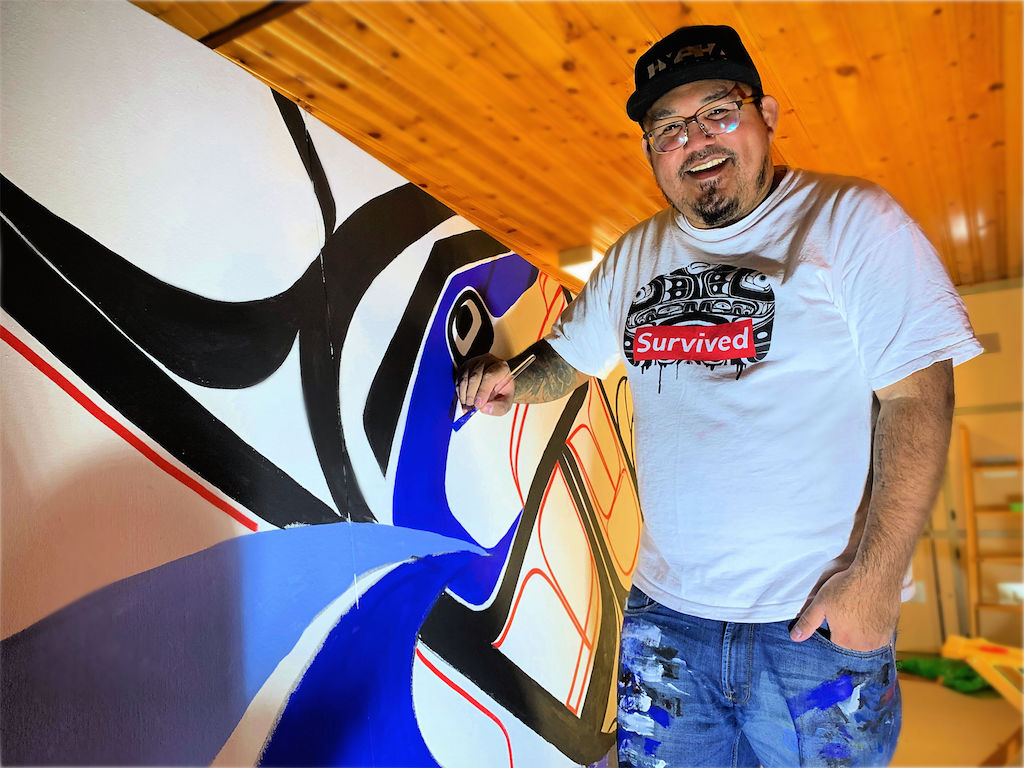 Artist KC Hall paints an enormous canvas canoe on Quadra Island, which will be a centrepiece for the Sacred Journey exhibit this spring. Photo by Rochelle Baker
Previous story
Next story

A massive canvas canoe adorned with sweeping bold lines of red, black and royal blue swallows up the space around it.

Artist KC Hall has little room to step back and get perspective on his latest work housed in a temporary workshop on Quadra Island a week before Christmas.

Hall, renowned for his synthesis of graffiti, manga and Northwest Coast art, is finishing up a central piece for the Sacred Journey travelling exhibition, slated to launch in Campbell River on Vancouver Island this spring.

Born in Bella Bella and based in Vancouver, Hall is one of three artists working on the exhibit — itself an extension of a larger initiative to explore and celebrate the symbolism, culture and importance of the ocean canoe to the Heiltsuk and other First Nations along the coast of the Pacific Northwest.

The vessel’s resurgence signifies more than reviving an essential means of transport, it conveys freedom and the enduring strength of First Nations and their resistance to colonization, Hall said.

“It represents our means of travel, fishing and hunting and exploration of our own territory,” he said.

“But when we showed up to different communities, what we had (depicted) on our canoe represented who we were.”

The richly painted canvas canoe has two sections that can be separated, so exhibition guests can walk the length of the vessel during the multimedia exhibition, said Hall.

The canoe is adorned with four prominent Heiltsuk crests.

“The ocean-going canoe has been a vessel of community empowerment, language revitalization and a way to reconnect our young people,” said Frank Brown, member of the Heiltsuk First Nation and producer of the Sacred Journey exhibit.

The raven and whale are illustrated on one outer side of the canoe, and the eagle and wolf dominate the other.

“Symbolically, it has the raven and eagle up front, using their wings to pull the canoe forward,” Hall said.

“And the whale and the wolf go behind both of them, controlling which direction they can go.”

The work of two other Heiltsuk artists, Ian Reid and Chazz Mack, will be showcased, said the exhibit’s executive producer Frank Brown.

Reid has created a welcome figure and transformative mask for the event, while Mack has designed the house posts and paddles to accompany the canoe, said Brown, also a member of the Heiltsuk First Nation.

“All three are very talented artists,” Brown said. “After touring for five years, the exhibit will come back to Bella Bella and be a permanent resource for the community.”

The interactive exhibit will also feature video and storytelling to immerse audiences in the canoe culture of the Pacific Northwest, said Brown, who also carries the hereditary hemas (chief) name of Dhadhiyasila (λ.λ.yasila), meaning “preparing for the largest potlatch.”

The Indigenous ocean-going canoe has made a comeback over the last three decades, said Brown, a leader in the movement who also co-ordinated the annual Tribal Canoe Journeys event to Bella Bella in 1993 and again in 2014.

The annual event, celebrated by Indigenous people across the Pacific Northwest coast from Alaska to Oregon, sees paddlers journey hundreds of kilometres to sister nations to build solidarity and cultural exchange.

“We have a long history with the resurgence of the ocean-going canoe,” said Brown, who, as a student, raised funds to carve a traditional canoe, or Glwa in the Heiltsuk language, and mobilized others to make a symbolic journey to Expo 86 in Vancouver.

“The ocean-going canoe has been a vessel of community empowerment, language revitalization and a way to reconnect our young people,” said Brown, who said a journey can lead to life-changing experiences.

A canoe journey also encourages the intergenerational transfer of knowledge between elders and youth, he said.

The Sacred Journey exhibit and online resources combine iconic artwork, technology and Indigenous people’s point of view to highlight the importance of the canoe, Brown said.

Other First Nations or Indigenous people will also be invited to share their stories for the exhibit, he added.

“I think it’s a unique project. It’s going to be interactive, interesting and fun,” Brown said.

“We hope to share this story not only from the Heiltsuk perspective, but also from the perspective of the canoe-going nations from along the Pacific Northwest coast and other Indigenous people throughout the world,” he said.